On a peaceful November Monday in Jackson County there was some measure of disappointment that the Jackson County Central Huskies would not be playing at the Prep Bowl later in the week. But those feelings were tempered by an immeasurable amount of pride in knowing what the world thought of the boys on the football team from the little southwest Minnesota town near the Iowa border.

In a tiny gym inside Pleasantview Elementary in Lakefield, 12 miles from Jackson, four of those boys were teaching. The senior team captains -- Nathaniel Post, Bradley Buhl Jr., Rudy Voss and Jack Brinkman – spent the day with fifth- and sixth-graders, playing games and talking about what's important. They emphasized words like respect, character, hard work. And love.

"The three things that I want you guys to take with you are things that I live by, that we all live by," Voss said to the kids sitting on the gym floor. "The first one is love. Love each other, respect each other, form a bond with each other. The second one is work hard. Work hard in anything you guys do, whether it's sports, the classroom, group projects, work hard. And the third one is respect. Respect each other, respect your teachers, respect your parents. Holding the door for someone, saying please and thank you, that's the kind of people we want you guys to be.”

If Rudy's name sounds familiar, it's probably because you’ve seen a viral video from the Nov. 16 Class 3A state semifinals at U.S. Bank Stadium. After the Huskies lost a heartbreaking 20-14 decision to Pierz in a game between unbeaten teams, Voss, Buhl and coach Tom Schuller spoke to the media in the Vikings’ postgame interview room. 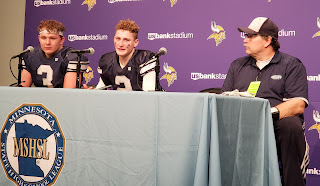 The video is emotional and stirring. Rudy, through tears, talked about football being a blessing in his life, the bond among the 21 seniors, how wins and losses don’t define them. At one point, Rudy is unable to speak and Bradley takes over, putting a hand on his teammate’s back and talking about how at the start of the season each player was asked to do their job and trust each other.

At that point, no one knew the impact their words would have. Two days later, A.J. Feldman of Lakeland News in Brainerd and Bemidji (who was covering Pierz) Tweeted a video clip of Rudy and Bradley that lasted 2 minutes, 12 seconds. And that video went off like a rocket.

It was re-Tweeted by NFL Hall of Famers, posted on a social media platform called TikTok by the NFL, went viral on the MSHSL Facebook page and just about everywhere else. It’s safe to say that millions have seen it and countless numbers of young athletes have been inspired by it. People as far away as Australia and Ireland have liked it on Twitter, and Voss and Buhl have received private social media messages from Scotland and many other locations.

“I can't tell you how many DMs (direct messages) I've had and Brad's had,” Rudy said after the school day ended. “Just kids that have reached out to us and said, ‘You're an inspiration, you make me want to work harder’ and things like that. That’s probably the best thing. It’s awesome. It’s just crazy how worldwide it is.”

The background of the video includes a Vikings logo, and at least one viewer thought the two players were local NFLers.

“One of our favorite comments was a guy saying, ‘Can you believe these grown men, professionals, are crying. This is their job,’ ” Voss said, laughing.

As the video went wild, JCC activities director Shelly Hotzler came up with the idea of having the captains share their message with younger students. On Tuesday they spent the day in a similar fashion with middle schoolers.

At the elementary school Monday, Brinkman asked the younger kids if they had seen the video. Of course they had.

“Yeah, these guys are like famous now,” he said. “Isn’t that cool? So these two showed really good character. They went into that press conference and they talked. They were asked questions like, ‘What does football mean to you? What does your team mean to you?’ And these two came up with the best answers you could have asked for, and that's why they're famous. They said that it wasn't about the games that meant the most, it was being with the teammates, being with the coaches, the lifting, the bus rides, all that.

“Events are going to happen, sometimes bad things happen. It's how you respond, which is the biggest part, and they responded really well. Which is why something like 10 million people have seen the video. It’s how you respond. So if something bad happens in your life, respond well. Be kind.”

Schuller, who teaches special education, admits he isn’t well-versed in social media. But he knows about the character of students at his school and players on his team.

“You could have had eight to 10 guys who would have sounded like that,” he said. “That's the really crazy thing about it. I mean, we have a lot of very articulate kids that would have had the same thoughts. That's a special group, there's no doubt.”

Brinkman agreed, saying “Truly, I think what they said was perfect and if you asked any of the other seniors they would have had a similar response. I think our coaches have instilled that in us.”

Schuller said he was proud of his players, because they gave it everything they had against Pierz. Jackson County Central led 14-0 after the first quarter and was in front until Pierz took the lead on a 48-yard touchdown pass with 1:19 left in the fourth quarter.

“One of our big things is we tell the guys if you do your best, that's got to be good enough,” Schuller said. “You have to make sure that kids trust you, that when they put it out there, it is good enough. And what they put out there that day was. And that's the first thing I said to the Pierz kids; we congratulated them and said it was everything we had, and they said that was everything they had, too.

“And we said ‘Good luck.’ I don't know if I'll watch the championship game (Pierz will meet Dassel-Cokato for the state title on Saturday) because that was a tough loss but we have a lot of respect for the Pierz team and their players. I don't think there was a cross word said out there between the players or coaches and officials and it was kind of what we're trying for in athletics.”

Still, it was a tough loss to take. And seeing the video remains difficult for some.

“That video is still hard to watch for all of us,” Post said. “I watched it the first time with my mom next to me and she couldn't finish watching it. But it just kind of explains the brotherhood we have going on here.”

Voss said, “I couldn’t even remember what I said. After I left the room I had a little idea but I had so many emotions. You could have asked me a couple hours later and I really couldn't remember what I even said.”

There’s no need to remember the details now. The world knows.

"The three things that I want you guys to take with you are things that I live by, that we all live by. The first one is love. Love each other, respect each other, form a bond with each other. The second one is work hard. Work hard in anything you guys do, whether it's sports, the classroom, group projects, work hard. And the third one is respect."
Rudy Voss, Jackson County Central senior