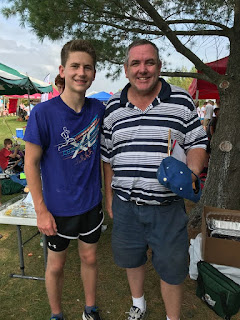 Ryan Young was a ninth-grader at Princeton High School when he started pondering the list of school records in cross-country and track and field. Dreaming of someday seeing his own name on the board, he did something else back in ninth grade.

He tracked down the holder of the school records in his own specialties – cross-country in the fall and the 1,600- and 3,200-meter races in the spring – and wrote in an October 2016 email: "I would love to hear from you as I have some questions about your record and how you got such a fast time."

The record holder is Doug Burns, a 1981 Princeton graduate whose records at the 5K cross-country distance and in the two track events have stood for nearly four decades. Doug is the athletic director and coaches track and cross-country at Lake Crystal-Wellcome Memorial, where he has taught math since the late 1980s. (Ryan and Doug are pictured here at a cross-country meet when Ryan was a freshman.)

Ryan's times have steadily improved since his freshman year and before this spring he seemed to be on the threshold of knocking Doug's track records into second place on Princeton’s all-time lists. Now a senior, Young’s quest has been sideswiped by COVID-19 and the shutdown of spring sports.

“It’s pretty heartbreaking for me as a parent,” said Ryan’s mother, Kim Young. “That’s been tough; talking about the potential of not having a season and then this (shutdown) started, that was really his only breakdown moment. He’s been working toward them for four years. It’s tough.”

The clear downside is that Ryan is missing out on his final track season. But the upside is a bright ray of sunshine in a gloomy sky: the friendship that has developed between Princeton athletes from the Class of 1981 and the Class of 2020.

Ryan’s original email began like this: “My name is Ryan Young, and I am a freshman at Princeton High School. I just joined cross-country this year and noticed that Doug Burns holds the boys cross-country record for Princeton and was wondering if you are the Doug Burns from Princeton?”

Burns quickly replied. One of the first things he told Ryan was, “It’s about time somebody broke those records.”

“They were realistic goals,” Ryan said of breaking the track marks this spring.

One of Ryan’s classmates, Lexi Duscher, broke the girls cross-country school record back when they were in ninth grade. That had an impact on Ryan.

“Seeing her do that was kind of inspirational,” he said. “I put that in the back of my head and started working for it.”

Ryan and Doug have corresponded over the years and have talked in person when both teams were at the same competition. Doug went to state in cross-country and track and Ryan has competed at the state cross-country meet twice.

“Ryan is one of those great kids, such a natural leader,” said Princeton cross-country and track coach Tom Ostroot. “He can bring the team tighter. He has goals and he gets the rest of the team to buy in and follow along. He’s one of those perfect athletes who makes himself and others and even the sport better.”

The Princeton boys cross-country team won the Mississippi 8 Conference championship last fall – with Ryan winning the individual title -- the first time the Tigers had done so since Doug Burns was an eighth-grader.

“There’s no way our boys team won the conference without (Ryan) leading the way,” Ostroot said.

Burns has been careful to offer very general advice to Ryan out of respect for the Princeton coaches.

“I’ve been thinking about him,” Burns said this week. “I didn’t tell him about the spot where I used to jump the fence. I lived a couple hundred meters from the track so I was over there a lot. The contact with him has brought back so many great memories.”

Doug even sent information from his own training journals to Ryan, offering a glimpse into how he prepared in the 1970s and 1980s.

“That was super helpful and really inspiring,” Ryan said. “Knowing him on that level gives me a boost and motivation.”

In an email sent to Doug two days after the 2020 spring season was put on hold, Ryan wrote: “It’s been really hard thinking my senior year might be over and I could very likely not have a last chance to try and run as fast as you did. Through it all, I’ve still been working just as hard if not harder then I usually do during the season.”

Over the winter, Ryan worked especially hard to prepare for the track season. Along with other Princeton athletes, he competed in several USA Track and Field indoor competitions and felt confident in his conditioning as the spring neared.

“This winter I’ve been working my butt off,” he said. “And now I don’t have a way to show what I did this winter. We were all pretty excited, we were dropping some decent times. But it’s so tough. One of the best things about running in high school is running with your friends all the time.”

Even before the spring, Ryan had completed enough credits to graduate. He is taking mostly elective classes now and will continue his athletic career at Minnesota State University.

Burns is a graduate of Minnesota State and lives in Lake Crystal, which is 14 miles from the university campus.

Even if Ryan is unable to get on the track and take aim at Doug’s records, the Young family might not be done with that quest. Ryan’s brother Adam is currently a ninth-grader who has shown potential as a runner.

“Having my junior times as low as they are, I hope that gives him a push to try to get those records, too,” Ryan said. “If anyone breaks them, it would be awesome if he did.”