Best Of 2019-20, Number 8: Officially Speaking: Communication Is Key On The Field

When reporters cover high school football games, one thing is standard: You have rosters for both teams in front of you. But as I sat in the press box for Friday night's game between visiting Edina and St. Michael-Albertville, I had THREE rosters in front of me. The third one had details about the officiating crew: names, positions, years of experience, etc.

Also different: I had a small walkie-talkie in my pocket with a cord connected to an earpiece that allowed me to listen in as the five officials communicated with each other via matching devices. It was an eye-opening – and ear-opening -- experiment, a game inside the game that nobody outside the officials is aware of.

When a football was handed to the St. Michael-Albertville kicker to start the game, referee – also known as the "white cap” – Tim Litfin pushed the button on a small microphone clipped to his collar and said to his crewmates, “Have a good game, gentlemen. Have fun.”

As the game went on, crew members asked and answered questions, communicated information about penalties, offered encouragement and advice. 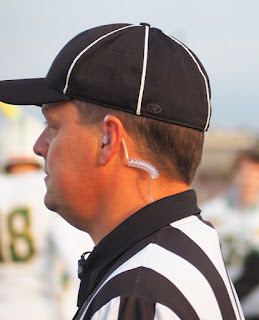 The first points of the game came on a short pass from St. Michael-Albertville quarterback Kolby Gartner to David Collins, who zigged and zagged his way for a 36-yard touchdown while teammates threw blocks at odd angles. After Collins reached the end zone, Litfin told his crew, “Good decisions over there. Good decisions on that play.”

Communications systems are standard for officials in the NFL and college football, and their use is spreading on the high school level. Litfin’s crew began using them last season.

“Headset communication for football crews, official to official, has changed the culture of football officiating,” he said. “You no longer feel like you are on an island as an official. Or that you may have to run a 4.4 40 to find a fact about the previous play before you make an announcement. Or, that you have to yell at the top of your lungs to get attention or send up a flair to have a crewmate get a decision from a coach. The bottom line is it makes crews better and is more fun.”

The devices cost about 25 dollars each. Jim Larson, the umpire on Litfin’s crew, purchased them on Amazon and makes sure they are charged before every game.

The other crew members are line judge Phil Kern, head linesman Chris Jostock and back judge Nick Litfin (Tim’s son). They have worked football games for a combined 66 years, with Tim Litfin in his 31st year; he also has been a high school baseball and basketball official for 39 years. Every member of the crew has worked multiple state football playoff games, and the Litfins have also officiated state baseball and basketball games. Last year the crew officiated a Class 6A football state semifinal at U.S. Bank Stadium.

Their “real” jobs are an interesting mix: an assistant vice president at a large national bank who works in the anti-money laundering department, a senior director of business initiatives, a city administrator, an executive director of community education, and a principal field solutions architect (which also is a suitable term for a football official).

Observing the crew from the sidelines Friday was Aaron Nordling, 26-year-old first-year official; Tim Litfin is his officiating mentor and the two of them would officiate a junior varsity game the following morning. (When a new official registers with the MSHSL, they are assigned a veteran mentor. Information on becoming an official in any sport is available on mshsl.org) 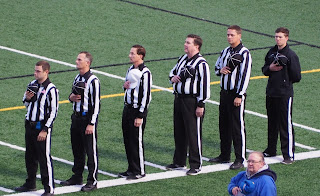 “The officials are there because they love the game,” Larson said. “And we approach every Friday like it's our own game: we watch video, have our own pre-game prep, and get mentally and physically focused. The radios allow us to be a better officiating 'team' once the game starts. We can remind each other of situations, praise each other for making great/tough calls, and support each other when the tough call isn't popular. In other words, we get to coach each other throughout the game. That allows us to be a more cohesive unit and make the event about the football game, not about the officials.”

The days when the entire crew had to huddle together to discuss decisions are largely in the past, because the devices are helpful in communicating everything from the result of the coin toss to penalty details, timeouts, clock management, reminders about positioning and situations, etc. When a penalty occurs on one sideline, the official on the opposite sideline can know what the penalty is and who committed it and can share the details with the coach.

“This might seem like a little thing, but for me standing on the 50-yard line for the pregame, I feel as if from the start of the contest I'm engaged with the rest of the crew,” said Jostock.

After the Hornets scored, he spread info on the extra-point attempt: “Tee on the field, gentlemen, tee on the field.” And as the end of the first quarter neared, the white cap said, “45 seconds left in the quarter, 45 seconds.”

After a short-yardage play, the message from one of the sideline officials was quick: “He’s short, he’s short. Fourth down, guys.”

“Know your spot, get a good spot.”

After a pass over the middle -- when everyone thought it would be a running play – went for a first down, one of the crew members said,
“Great play call.”

“With these five guys, the camaraderie is amazing,” Tim Litfin said “It’s a family feel, that’s what it is.”

Friday’s game was Homecoming at St. Michael-Albertville, which is in its first year (as is Buffalo) as a member of the Lake Conference with Edina, Eden Prairie, Wayzata, Hopkins and Minnetonka. The crowd was estimated at more than 5,000 and the environment was electric. The game went down to the wire before the Knights pulled out a 34-29 win over Edina, and the chatter among the officials picked up in intensity and focus in the final minutes.

“Keep ‘er going guys, solid effort on every play,” Tim Litfin told them, sounding like a coach. “Under four (minutes to play).”

Nobody could argue with that call.