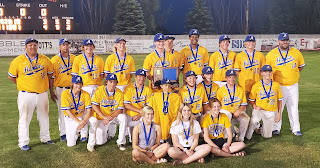 We are halfway through the annual exercise in which I go back through all the John’s Journal stories from the previous school year and select my personal Top 10 favorites. Today we unveil story No. 5, which was posted on June 11 after the Class A Section 3 baseball playoffs ended with Adrian/Ellsworth qualifying for the state tournament.

It was an emotional day in Milroy when the Dragons, needing one win, lost to Yellow Medicine East – which came out of the elimination bracket – before winning the second game of the day to reach state. Two years earlier, they lost one of their three-sport teammates when Carter Braun was killed in a vehicle accident. The Dragons kept Carter and his family close to their hearts and kept his jersey on the bench with them at every game.

Here’s how the story opened …

MILROY – When the winning run was scored on a bases-loaded walk with two outs in the bottom of the seventh inning Thursday night, ending a grueling day of doubleheader baseball with an unlikely trip to the state tournament at stake, the Adrian/Ellsworth Dragons hooped and hollered and hugged. They received their Class A Section 3 championship trophy and gold medals and were heading to the outfield to pose for photos in front of the scoreboard.

Qualifying for state was big, but coach Joe Kruger knew what was even more important. He told the boys, “Get Carter’s jersey. He’s definitely with us.”

Carter Braun’s No. 8 jersey has been on the bench with the Dragons all along, ever since he was killed in a vehicle accident two years ago this month. There are six juniors on the team roster; that number is seven when you include Carter. And Carter is included in everything. 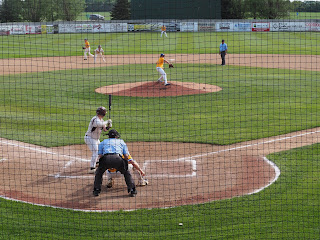