Maddie Gallant celebrates with her father, Norm, after winning in a section tournament to qualify for state.

Here we are, ready to unveil the No. 5 entry on the list of my Top 10 favorite stories from the 2021-22 MSHSL year. The wrestling season was historic, with competition dedicated to females held at the section and state tournament levels for the first time. This story, which centers on one wrestler and her family, was originally posted on March 6 …

Maddie Gallant grew up around wrestling. Her father, Wadena-Deer Creek activities director Norm Gallant, is a former long-time wrestling coach and Maddie was a scorekeeper for the Wolverines when she was in junior high.

This season was different, because Maddie became a wrestler for the first time as the only girl on the W-DC team. Her debut season ended Saturday at the state tournament in St. Paul. It was quite a ride for the junior.

“I’ve been going to the state tournament for a very long time to watch,” Maddie said Sunday. “It was very different to actually be in the tunnels and stuff.”

Not to mention on the mats. Wrestling at 138 pounds, Maddie lost in the semifinals to Eastview's Riley Myers and in the third-place match to Jadyn Kelly of Bemidji. Through section tournaments, four girls advanced to state in each of 10 weight classes. They wrestled right alongside three classes of boys at Xcel Energy Center, including in Saturday night’s championship round.

“I think it’s a great thing,” said Norm Gallant, who returned as a part-time coach this season to assist his daughter. “I was a wrestling coach for a long, long time. I think it’s changed so much over the years.”

Very small numbers of girls have been part of high school wrestling in Minnesota for more than 20 years. The first female to qualify for the state tournament was sophomore Elissa Reinsma of Murray County Central in 2009; she was honored with a standing ovation prior to Saturday’s championship match.

The only other girl to wrestle at state was Emily Shilson; competing for Centennial and Mounds View, she went to state in 2017, 2018 and 2019 and now is a member of the women’s wrestling team at Augsburg University.

To have 40 spots in the state tournament brackets reserved for girls this year was a giant step forward.

“It was definitely different to wrestle other girls when I’ve been wrestling mostly boys all season,” said Maddie. “I’m not exactly the strongest girl around, but it’s been much more competitive wrestling a girl than wrestling a guy.”

She said she had thought about joining the wrestling team prior to this season, and “There was just extra encouragement when they added it.”

She proved her mettle in the section tournament. After losing her first match, Maddie needed to win three matches in a row to secure a spot at state. She did so, with three pins.

Maddie has one sibling, Grace, a senior who just completed the basketball season. Grace couldn’t be more proud of Maddie.

“I think it’s pretty impressive that she got down there (to state),” Grace said. “Most of the other girls had done a lot more wrestling than Maddie. I kept getting more nervous because the wrestling was so intense, they were so tough. It’s really cool that she could be a pioneer in this.”

Mandy Gallant, Norm’s spouse and the girls’ mom, is a kindergarten teacher. The first tournament of the year for the Wolverines, and Maddie’s wresting debut, was at home. Some of Mandy’s female students were on hand to watch and afterwards they said things like, “Mom, I can do this.”

“They wanted to practice and learn about it,” Norm said. “It’s going to grow a lot.

“Once you’re a part of wrestling, it’s part of you for your whole life.” 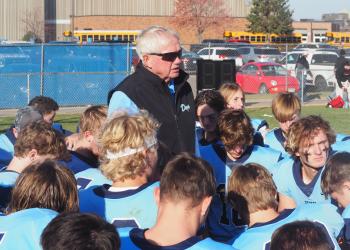