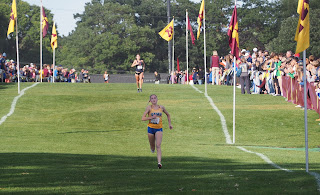 Between Friday afternoon and Saturday afternoon I witnessed a cross-country meet in Falcons Heights, a football game in Cambridge and a volleyball tournament in Apple Valley. Had I been able to squeeze in girls tennis, girls swimming, boys and girls soccer and adapted soccer, I could have covered the full slate of MSHSL fall sports from stem to stern.

I had a blast for several reasons. The weather for outdoor activities has been splendid in recent days, with leaves beginning to turn and the bright September sun providing a natural spotlight. The biggest reason, however, was the utter normalcy of it all … fans in the stands, hot dogs on the grills, coaches coaching, officials officiating and kids competing. There is nothing better.

A year ago, the situation was much different. There were limits on spectators, masks were part of everything and concessions were limited or nonexistent in most places. Things were especially off-kilter for indoor sports; many swimming and diving dual meets (the only kind of competition allowed in 2020) were held virtually, with each team competing in their own pools and then comparing times and scores. 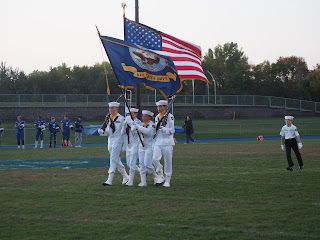 The 2020 volleyball season was also unlike anything anyone had experienced. Most schools had a limited number of spectators purchase tickets online and provide phone numbers in case contact tracing was needed later. Masks were required, there were no handshakes between teams, the teams didn’t switch seats for every game during a match.

Some of those things remain in the autumn of 2021, but volleyball is largely back to normal. The biggest example of that return was the Eagle Invitational tournament on Friday and Saturday in Apple Valley. The field of 16 teams included nine of the top 10 teams in the Class 4A coaches poll, along with Marshall, which is top-ranked in 3A.

All 16 teams played two matches Friday and two more Saturday. With four courts in use and no limits on spectators, it was spectacular. Due to district policy, everyone but the athletes were required to wear masks, and that seemed like a small price to pay in order to watch and cheer. Last fall, there were no volleyball tournaments during the regular season, nor were there any section or state tournaments. The 2020 season ended with a solemn thud.

“We've talked about that with our staff, that we've got so many players on our team who hadn't played in a tournament,” said Marshall coach Dan Westby, whose team placed fifth in Apple Valley. “Last year, most of our players were sophomores on the varsity but they didn't get this tournament experience. So there were some deer-in-the-headlight looks from some of our kids because they just haven't been in that. And I kind of take it for granted as a head coach because obviously I've had the opportunity to come here for years, but our players aren't used to it. That's why these things are so valuable. It’s not just the great competition but the experience of being put in this kind of environment.”

The Apple Valley tournament, along with other events such as the recent Southwest Minnesota Challenge in Marshall, are the first such events for volleyball teams in two years. 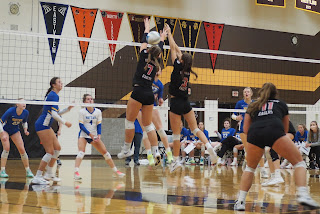 “It felt like the whole season last year was a scrimmage, because there was no end,” said Eagan coach Kathy Gillen, whose team defeated Shakopee in the Eagle Invitational third-place match. “As you walked away from a game, whether you won or lost, you just waved at the other team and then moved on to the next game. So now there's some stake in play and they’re playing better.”

The big weekend tournaments give people involved in the sport -- whether they’re players, coaches, officials or fans – a chance to catch up with each other. Scott Jackson, whose Wayzata team is ranked No. 1 in Class 4A and defeated Eden Prairie in the championship match Saturday, said he was happy to see talented players that he was unaware of.

“This feels normal,” he said at Apple Valley. “The only thing that's a little different is I take pride in knowing our volleyball community really well, and it's a little harder right now between Covid and a shortened season last year where you're only playing in your own conference.

“I watched a kid from Lakeville North last night, and I've learned her name is Kaitlynn Peterson and I had never seen the kid play before as far as I know, and she's amazing. She's a very good player and I really enjoyed watching her play last night, she's amazing. She's going to Bradley. A kid out of Minnesota that's going to Bradley for volleyball, and I didn't know who she was. That's where we are right now, a little bit.”

Some Covid-induced changes remain in volleyball. In many matches, teams stay on the same side of the net and on the same bench throughout. When they gather  together, however, they are free to huddle tightly and not follow the social-distancing guidelines of a season ago.

“It's fantastic, just to even have kind of a normal bench back,” said Eden Prairie coach Chad Becker. “You’d call a timeout and you kind of walk into an abyss of your players and your coaching staff, you didn’t know who could hear you, and you couldn't be too loud because you didn't want to say anything the opponent could hear. So just the normalcy of your bench is great.

“And being in a tournament like this, the first time obviously for all of us in two years now, it's just nice to feel like we're just doing things like we did. … The resiliency of the kids has been fantastic to see. I mean, it's terrible what they've had to go through, getting robbed of a year and change.”

One benefit of the 2020 experience seen now is that the players couldn’t rely on cheering crowds for motivation; they had to motivate themselves and each other. Shakopee coach Matt Busch said, “Last year girls had to learn to play completely within themselves and within the team and not rely on anybody else. And that has continued into this year, and anything added to that is just a bonus.

“You don't see them looking for or needing that extra crazy support, whether it's at our home gum or wherever. They just don't need that this year, and that's a big positive.”

Along with tournaments, also returning this season are team gatherings, providing opportunities to get together for pasta feeds, movie nights or whatever.

“Oh, for sure. They love being together,” Gillen said. “So it's just a lot more normal and more fun.”

“The kids just want to be together and they want to pursue a sport that they love,” said Jackson. “They don’t know it, but they're growing as individuals. And whether it was a shortened season or this season, I think that's the same.”