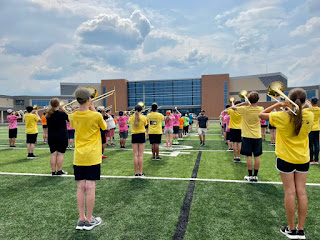 Alexander Hamilton never gave a thought to football or high school marching bands, since neither was even a thing when the founding father came out on the short end of a duel with Aaron Burr in 1804.

But Hamilton gets a share of the credit for what is happening with the Farmington High School football team and marching band this fall. The two groups – 60 varsity football players and 140 musicians – have formed a close relationship with an assist from good ol’ A dot Ham.

Bradley Mariska, one of the school’s band directors, and Jon Pieper, the Tigers’ co-head football coach along with Rick Sutton, have been working together to create a class based on the life of Hamilton and the Broadway musical about him. Mariska will handle the musical aspects of the class and Pieper, a social studies teacher, will focus on history.

In spending time together working on the course (which begins this fall), the two educators have become close. Pieper alerted Mariska recently about an issue his football players were having: They were terrible at singing the school song. It’s a skill they could certainly use when home games end; the tradition at Farmington is the football team stands in front of the student section, the band encircles them, and everyone sings the school song together.

Mariska said, “He sent me a text asking if I could come to practice; ‘These guys can’t sing the school song worth a crap.’ ”

Pieper told Mariska, “I want them to actually sing along, know the words. I’ve been trying to teach them. It’s not working. They can’t sing.”

Mariska stood in front of the team, played a recording of the school song, and magic happened. The energetic Mariska got the kids started on the right note, clapped out the tempo, made sure they knew the lyrics … and they picked it right up. In fact, when they finished a top-notch version of the song, they hooped and hollered, celebrating as if they had just pulled out a last-second victory.

A few days later, Pieper had another idea. The football team would be finished on their practice field at 8 p.m., with the band on the stadium field until 9. Pieper said, “What if we came as a team and watched? The football team can learn from another organization that works hard and puts a lot into it.”

The football players sat in the bleachers at Tiger Stadium as the band worked on their field show, which requires incredible attention to detail, timing, teamwork and footwork, not to mention musicianship. 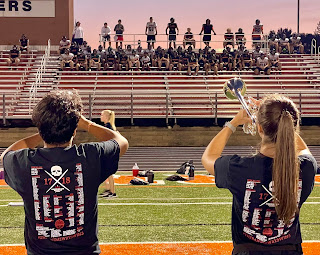 “They were super engaged, cheering for the band,” Mariska said of the football players.

“The kids really got into it,” he said. “They asked, ‘Can we sing them the school song so we can show them how much we've improved?’ And that was the cool part about it. You can forget that so many of these kids are friends with each other. It was really kind of a cool moment, as an educator.”

Mariska said, “We played for them, they sang along and we had a really fun time together. It was one of those moments that make high school and high school sports so memorable and meaningful.”

During this process, everyone realized that the varsity football players had never witnessed the band perform at halftime, because the team is away from the field at that time. 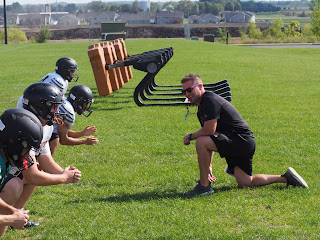 Senior football player Zach Cochnauer said, “We always talk about attention to detail and they just have so many moving pieces, I don't think I could ever do that in my life, it is so cool. They know every spot on the field and how they move, it's just incredible.”

Members of the band are equally excited about how things have evolved.

“I was talking to a football player today, and he was saying all the players have so much more respect for the band program,” said senior percussionist Paul Radke. “They don't really see our show, so them coming and seeing it even during rehearsal made us feel good, made us feel appreciated.”

Senior Mac Kenzie Frame, who plays the bass clarinet, said, “The relationship has been really interesting this year and it's grown a lot. It shows the support our programs have for each other. In the past years it's been a little bit like that, but this year, with the football team coming to practice and watching us, it really shows support and makes us feel more included and welcomed as a program. We're just able to be together and form more relationships and support each other even more.” 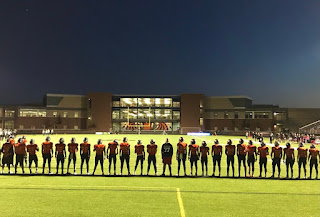 The band was not able to play at games last year due to Covid restrictions. Clarinet player Stephanie De La O, now a junior, is also a cheerleader who attended home games in 2020 and noticed the difference without the band (she plans to rotate between band and cheerleading each quarter of football games).

“Farmington is a really big community and everyone comes together when it comes to football games,” she said. “Without the band it would be kind of boring.”

This all started with Alexander Hamilton, an inventive new high school class and the desire to see the football players sing the school song with pride.

“It just kind of came up that we would like them to sing the song where it doesn't look like a middle school dance and is so awkward,” Pieper said. “We just kind of expanded from there, talking about how much crossover we have in the building with not just the cocurricular stuff that we do, but how we should use each other more as educators in different capacities.”

A dot Ham, your obedient servant, would certainly approve.