In Season Of Obstacles, Fun Comes Out On Top 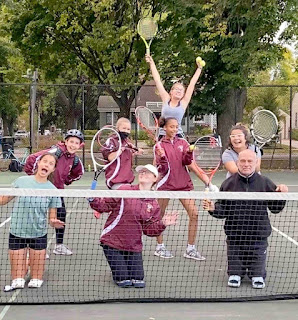 After their first-round match Tuesday in the Class 2A Section 6 tournament, the girls tennis team from Minneapolis Roosevelt took a victory lap. They didn’t win the match; in fact, they lost to Benilde-St. Margaret’s 7-0. But the Teddies felt pride in their team.

With every high school athlete and team in Minnesota under the shadow of Covid-19, this year could have been written into the script of “Stranger Things.” Despite that, the Roosevelt girls tennis team has worked to take advantage of what’s possible, every step of the way, building something special.

Winning? Oh sure, that’s great when it happens. But having fun, making memories and doing it together has become a hallmark of the Teddies.

“Basically, how we operate is fun first,” said second-year coach Jack Nelson. “These are their memories and we have to make it as fun as possible for them.”

The hurdles this season have been many. The Teddies’ schedule was stomped on by the virus, with most scheduled opponents playing only teams in their own conference and leaving Roosevelt in the lurch. And some prospective players chose not to play tennis this fall. Despite it all, the Teddies have a junior varsity team for the first time since the 1980s and have made lifelong friendships and memories.

Nelson is the driver of it all. A former junior varsity coach at Minneapolis Washburn and a longtime youth tennis coach in Minneapolis, Nelson, 61, is an artist and sculptor, sailor and scuba diver … not exactly the prototypical high school coach.

“He’s been a blessing,” said Roosevelt activities director Dennis Stockmo. “He has so much energy and desire.” 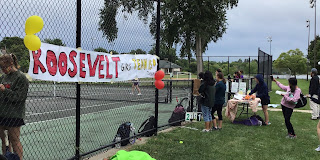 The coaching job opened up two years ago when Jose Williamson left Roosevelt for Minnehaha Academy, where he could coach his son. A Roosevelt parent who was familiar with Nelson from his work with players in the Inner City Tennis program brought him to Stockmo’s attention.

Stockmo and Nelson met at Lynnhurst Park, where Nelson was teaching for Inner City Tennis. They hit tennis balls back and forth and got acquainted.

There are no seniors on the Teddies’ roster of 22 players. There is a definite family atmosphere, with players often staying after practice to hit balls with parents.

“It’s just an incredibly wonderful time on the courts, while everything else is in chaos,” Nelson said.

To alleviate the scheduling issues, Nelson arranged for his team to play several intrasquad matches. They will do that on Saturday when the girls are divided into several teams in what they’re calling the Olympics, with each team declaring the country they are representing.

In previous intrasquad competitions Nelson has been known to fudge the scores, or as he phrased it, “Magically, the scores sometimes disappear. This week they’re making me bring a white board so they can see it for themselves. They don’t trust me anymore.”

Parents have become a big part of the tennis program, forming a booster club, making banners to hang on the fences and setting up picnics for the girls. Nelson and assistant coaches Lucia Marquez Reagan and Kathy Xiong have as much fun as the kids.

Stockmo said of Nelson, “I think his calling is to teach the game of tennis. He puts in an incredible amount of hours over the summer with ICT and transfers that to the girls. He’s done a fantastic job. Our numbers are up, when we were worried about even having a team.”

Last year the Teddies took an overnight trip to Duluth for team bonding and matches. Losing that opportunity this year added to the difficulties.

“It’s been a rough, rough, rough time,” Nelson said. “But when I really think of it, it’s really been the best time. When this whole thing is over, hopefully we can get back to a full season. We’ll still have our fun.”

After each match the coach sends an email to the players and their families, including positive comments and fun photos.

At the bottom of each email, Nelson writes “Best Season Ever.”

“I think (Nelson's) calling is to teach the game of tennis. He puts in an incredible amount of hours over the summer with ICT and transfers that to the girls. He’s done a fantastic job. Our numbers are up, when we were worried about even having a team.”
Minneapolis Roosevelt activities director Dennis Stockmo