Winter Sports Are Back And Everybody Is Happy 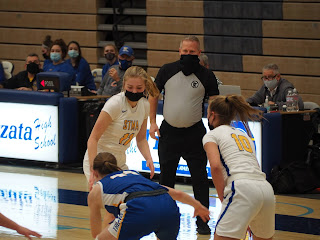 In the business that I’ve been a part of since I was in 10th grade, a notebook and a writing instrument are vital pieces of equipment. On Friday evening, sitting by myself in one of the end zone bleachers inside the Wayzata High School gym, here are excerpts from the latest notebook:

Fifty-four days had passed since the last time I had attended a high school sporting event. From a November football game in Waseca to a mid-January basketball game at Wayzata, it seemed at times like things would never return to normal. But here we are, games … whistles … applause … and everything else that makes these traditions so important to our communities.

Yes, everybody wears a mask and social distancing is part of the routine right now, but winter sports are back and everybody is happy about that.

“I’ll tell you what, once the ball went up in the air and you look up in the stands and parents are cheering and kids are playing, it's high school basketball,” said Wayzata girls coach Mike Schumacher after his team lost a 62-60 decision to St. Michael-Albertville. “In that respect, it was just really, really good to be back playing.”

It was quite a sight, played out inside gyms and ice arenas and in pools and on wrestling mats and snowy hills and parks all over the state since competitions were allowed to begin on Thursday.

A lot has changed, certainly. Some officials use hand-held, electronic whistles, which you might not realize if you’re not paying attention. Coaches and players on the benches are separated, locker rooms are used sparingly, visiting teams bring their own basketballs for warmups, and hand sanitizer is part of the routine.

“We didn't know until we came into the gym where people would sit and what timeouts would look like and the national anthem and introductions,” Schumacher said. “You can see it in a script, but until you do you don’t know.”

During timeouts, the Wayzata girls simply stood in front of their bench. The St. Michael-Albertville team moved to an area in a corner of the gym, where six folding chairs (one for coach Kent Hamre and five for players) were used. After each timeout, a Wayzata staff member sprayed the chairs with a hand-held sanitizer. 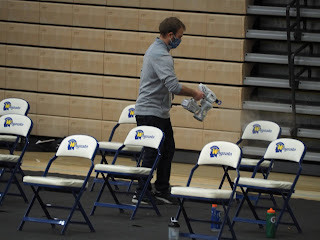 There are no student sections, pep bands are very rare, and that’s because spectators are limited to 25 percent of the facility’s capacity up to a maximum of 150.

Friday’s contest was one heck of a game between two outstanding teams. St. Michael-Albertville finished 20-9 last season and went to the Class 4A state tournament, losing to Farmington in the state semifinals before the event was halted due to you know what.

Wayzata went 24-5, falling to Hopkins in the Section 6 title game. Hopkins was set to meet Farmington for the state championship before you know what. The 2021 Trojans roster includes 6-foot-2 senior Jenna Johnson, who will play collegiately at Utah, and 5-11 junior Mara Braun, who has made a verbal commitment to the University of Minnesota.

Wayzata took off quickly, leading 12-2 after four minutes. It was 20-7 with less than eight minutes left in the first half but the Knights began figuring things out. The halftime score was Trojans 35, Knights 31.

St. Michael-Albertville took a 37-35 lead three minutes into the second half when 5-foot-2 junior Emma Miller bounced a cross-court pass into the hands of senior Kendall Cox for an easy score.

Miller and Braun traded three-point shots down the stretch. A driving layup by Cox gave the Knights the winning margin with 20 seconds left. Cox finished with 23 points and Miller had 11 for the Knights. Braun led Wayzata with 21, Johnson had 17 and Anna Koth 11.

“I've been a part of this for 19 years and I don't know if I've been as proud as I am of these kids, the way we dug ourselves a hole, and just fought back,” Hamre said. “These kids like each other, they love each other, and I think that goes a long way.”

St. Michael-Albertville’s season-opening win was even more impressive because the Knights played without sophomore Tessa Johnson, an honorable mention All-State player last season who suffered a broken leg during fall league play in November. She may return by the end of the season, Hamre said, but then again who knows what the Covid-19 situation will look like at that point.

The uncertainty of that proposition, the one-day-at-a-time, let’s appreciate today attitude is everywhere. Those are the kinds of lessons that can be learned when your season was stuck in the starting blocks for better than a month.

But now the games are back, the applause is back, the excitement is back.

“I’ll tell you what, once the ball went up in the air and you look up in the stands and parents are cheering and kids are playing, it's high school basketball. In that respect, it was just really, really good to be back playing.”
Wayzata coach Mike Schumacher

John’s Journal: Opening The Eyes Of The Next Generation