John’s Journal: A Coach, A Mom And A Kidney

“My One In A Million Is Right Here, Coaching My Girls!”

The whole thing, the whole unbelievable and wholly and very possibly Holy endeavor – a straight-up miracle, perhaps – began simply enough, with a high school soccer coach looking for video of a goal scored by a member of her team.

It ended with the coach donating a vital organ to the mother of three of her players.

This is a good time to share this story, as a new year of Minnesota high school activities opens Monday with the start of fall sports practices. Keith Cornell, activities director at St. Michael-Albertville, phrased it perfectly when he said, “This just shows once again that there is so much more to education-based activities than going out and playing games.”

The story began after a late-September soccer game in 2020. Senior Rheana Zerna scored an improbable goal from midfield as she and her St. Michael-Albertville teammates forged a 1-1 tie at Eden Prairie. Her coach, Megan Johnson, knew that Rheana’s father, Julius, often shot video of the games and she asked Rheana if her dad had taped the big goal. Rheana responded that Megan should become Facebook friends with her mom, Cleofe, because the video was posted on Cleofe’s Facebook page.

“That’s not something I usually do, but I wanted to see the goal,” Megan said.

The two indeed became friends on Facebook, where Cleofe (pronounced Cleo-fay) posted an important message in February: she was suffering from kidney failure and was asking friends to spread the word that she was seeking a donor. After a lengthy battle with kidney disease, her kidneys were functioning at 11 percent of normal capacity. Cleofe, 49, was looking at a future filled with kidney dialysis if no donor could be found. 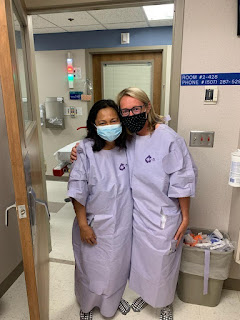 Her Facebook post read in part, “I realize that as much as I want to fight the good fight on my own, it’s no longer realistic without the help of others. I am currently on the Mayo Clinic kidney transplant waiting list for a non-living donor, but the wait is long, it takes roughly 4-7 years.

“My goal is to have a kidney transplant and not go through dialysis. For the sake of my loving family, particularly my awesome husband of 24 years and our 3 wonderful daughters, I am reaching out for your help.

“I don’t make these requests lightheartedly. I simply just want to extend my life here on earth. I want to grow old with my loving husband and see my wonderful children grow, finish college, get a job, and as they promise they will send me and my husband on vacations. That will be a day to look forward too! And of course, I want to see my future adorable grandchildren.”

The post included a link to Mayo Clinic’s Transplant Center and a questionnaire for prospective donors. Megan clicked the link, kicking off an unlikely journey tying her for a lifetime with the mother of three of her soccer players: Jucel Zerna graduated from St. Michael-Albertville in 2018 and played soccer at Augsburg before graduating this spring; Rheana graduated this year and is now playing soccer at St. Cloud State; and Juliana is a soccer player who will be in 10th grade when school resumes. 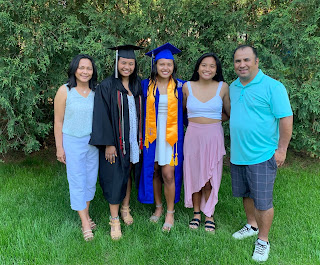 Megan, 41, is a third-grade teacher who has coached the Knights for 17 years. Her husband Jerremiah is a sixth-grade teacher and head coach of the Knights boys hockey team. Like Cleofe and Julius, they have three children.

"My wife is a person who exemplifies all the great things about education and activities," Jerremiah said. "She cares so much about her athletes. Every year she’s s emotional when the season ends because of how much she cares about them."

Shortly after filling out the online donation questionnaire, Megan received a phone call from Mayo Clinic. That was followed by more phone calls and a day filled with video visits. In the meantime, Cleofe had learned from Mayo that they were in discussions with a potential donor, but she didn’t know it was her daughters’ soccer coach.

Cleofe posted the news of a possible donor on Facebook. When Megan saw the post, she thought, “ ‘Oh my gosh, that’s me!’ It started to get real.”

In mid-March – still unbeknownst to Cleofe -- Megan spent two days at Mayo Clinic in Rochester undergoing what she called “virtually every kind of test you can imagine.”

Finally, in May, Megan got a phone call with the news that she was a match. Cleofe still wasn’t aware of Megan’s role. So the coach texted Rheana and asked for Cleofe’s cell phone number. She sent a text to Cleofe, asking if she could stop by the Zerna’s home after school.

“The text from coach Megan said, ‘I have something to give you,’ Cleofe said. “I thought it was something to do with soccer. She came over and had a red gift basket with a letter sticking out.

“I started reading the letter and said, ‘Oh my gosh! You’re my match!’ ”

The two moms hugged each other and wept.

“I was told it would take time to find a donor, it was one in a million,” Cleofe said. “And my gosh, my one in a million is right here, coaching my girls! I had goosebumps.”

The kidney donor and recipient met in Rochester the day before their dual surgeries on July 9. Megan and Jerremiah had dinner with Cleofe and Julius, learning that the Zernas had come from the Philippines; Cleofe was 16 at that time. She has worked as a registered nurse at North Memorial Health Hospital in Robbinsdale for 22 years, but her kidney issues had been taking a toll and Julius, who works as a mechanical engineer, had been driving her to and from work.

“A lot of people didn’t know I had a failing kidney,” Cleofe said. “I looked healthy. But I felt tired all the time, easily fatigued. I’d work eight hours and couldn’t even drive home.”

According to the National Kidney Foundation, approximately 100,000 Americans are waiting for a kidney transplant, with 6,442 patients receiving a living kidney in 2018. 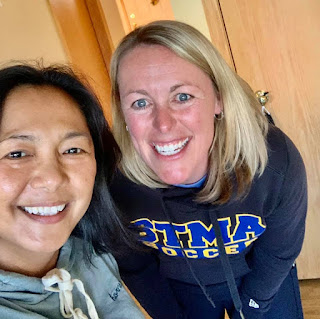 During the surgical procedures, one of Megan’s kidneys was removed and then received by Cleofe in a four-hour operation. It sounds odd, but the result is Megan has one kidney and Cleofe has three; it’s common for surgeons to leave a failing kidney in place if there are no complications.

Megan stayed in the hospital for two days before returning home. Cleofe was only hospitalized for three days, but she remained in Rochester for several weeks for tests and lab work in order to make sure her new kidney and anti-rejection medications were working properly.

Cleofe came home for good a few days ago, and everything is wonderful. The Zernas visited the Johnsons on Wednesday, and everyone shed tears of love and gratitude on their one-month transplant anniversary.

“I’m just really blessed and lucky,” Cleofe said. “I believe that God will not give me a mountain that I cannot climb. I believe he will provide at the right time, and he sure did.”

Soccer practice will begin Monday. Megan will be on the field with her team even though she remains under some post-surgery restrictions, including no lifting of heavy objects.

“I’m feeling really good,” she said. “I spent the first two weeks pretty much on the couch or in bed. I kept increasing my walking every day and I feel like I’m ready for next week.”

The news was shared far and wide with another post on Cleofe’s Facebook page. On April 28, she wrote in part, “God answers prayers to those who ask and believe. THANK YOU GOD. To those who’ve been following my progress in regards to my kidneys, meet my living DONOR, Megan Johnson, my girls High School Soccer Coach.

“Coach Megan came this evening and told me the greatest news that my family and I have been praying for: she’s my match! My living Donor! Coach, What a Blessing you are to me and my family!!!! We were both in tears as I was reading her letter, and as she informed me on how she made the decision to fill out the application: all the circumstances that lead to it.

“As Coach said, ‘It was meant to be.’ It was just the two of us in our kitchen crying and hugging each other. Julius and the kids were not home at that time, and they were sooooo happy to hear the good news.”

“The whole experience was really emotional and incredible,” Megan said. “For me, everything fell into place like it was meant to be, it was supposed to happen.

“I never thought twice. Jerr said, ‘Are you really doing this?’ And I never thought about not doing it. We’ve both shed a ton of tears, lots of emotion.”

It’s going to be a great year.

“I was told it would take time to find a donor, it was one in a million. And my gosh, my one in a million is right here, coaching my girls! I had goosebumps.”
Cleofe Zerna

One Team Campaign Shows Unity Across All Levels Of Minnesota Football