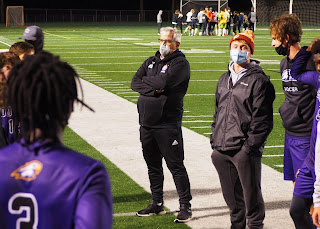 ROCHESTER – Long ago, decades before Tom Kane even began contemplating retiring from a Hall of Fame career coaching boys soccer at Lourdes High School, years before coaching three state championship teams, before even thinking about coaching high school soccer at all, he made a decision. It impacted the trajectory of his coaching career and his life.

Blake, the oldest of Tom and Carmen Kane’s three children, was 4 years old when Tom took him to the YMCA for a kids soccer program. The person in charge was Fuad Mansour, founder of the Rochester Youth Soccer Association. Mansour informed Tom that Blake was a year too young to take part in the program, but that hurdle could be cleared if Tom volunteered to coach.

Kane coached a Lourdes club soccer team for two years before it became a varsity sport in 1997. In 22 varsity seasons he has a record of 386-86-32 with three Class A state titles, 15 state tournament appearances and 14 Hiawatha Valley League crowns.

Kane was honored in a brief pregame ceremony Monday evening before the Eagles defeated Lake City 2-0. When his final season ends, the program will remain in family hands when his son Sean takes over. Sean, an assistant to his dad for years, is the co-coach this season.

“My son's been with me since 2006 so it just makes a nice transition,” Tom said. “I just thought it’s a perfect opportunity for me to walk away because I know what he'll do, and he'll do a great job.”

A 2013 inductee into the Minnesota High School Soccer Coaches Association Hall of Fame, Tom Kane was among a group of parents who came to Lourdes activities director Marv Peters in the mid-1990s, asking to start a soccer program. 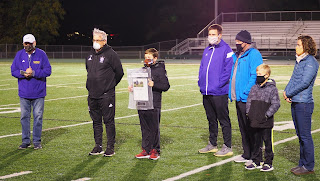 “At the time I knew little about soccer, but it was really growing in Rochester,” said Peters, who retired in 2017 after 44 years at Lourdes. “The youth soccer program was great here in the early 90s so we made a plan and started club soccer for a couple years.

“Tom’s numbers were so good right off the bat so we said, ‘Hey, let’s do this along with girls soccer.’ We made a great hire in Sarah Groven, who’s still the girls coach.”

Success came early for the Lourdes boys, with the Eagles winning back-to-back state championships in 1998 and 1999, then adding a third in 2012. Twenty-six players went on to college soccer, including seven at the NCAA Division I level.

“It was an every-year event that we would go to the state tournament,” Peters said.

Tom Kane, 64, played hockey at Lourdes before graduating in 1974. He will retire from a career with IBM later this year.

He made the decision to retire before Covid-19 struck, but he and Carmen are hoping to travel when it is safe. They have six grandkids in Rochester, Northfield and Apple Valley, who are also part of their grandparents’ plans; “And there's a lot of things I'd like to do in the fall that I haven't done for 25 years,” Tom said.

Soccer has been the family business as long as the Kane kids can remember. Blake, Meghan and Sean all played the game and became coaches, now helping their own children learn the sport.

Steve Strickland, the current Lourdes activities director (and track coach), said, Tom “has given everything he has and continues to do so. He's been a great mentor for me, too, with helping me understand soccer. I can't say enough about him, he's turned into a good friend. And what a great set-up to find that next head coach. Sean's going to step right in.”

“My son's been with me since 2006 so it just makes a nice transition. I just thought it’s a perfect opportunity for me to walk away because I know what he'll do, and he'll do a great job.”
Tom Kane