John’s Journal: The Halo, The Family, The Life Lessons

That was certainly the case Friday night when I drove to North Branch for a football game. I watched a fantastic contest, with the North Branch Vikings holding off the Grand Rapids Thunderhawks 21-20. But there was more. There was something great. In fact, there were two things that were great and both took place away from the action on the field. 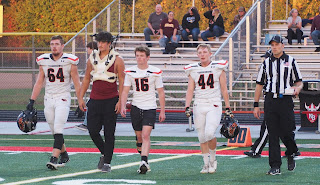 A week before Grand Rapids’ first game, senior linebacker/quarterback Andrew Thomsen was hurt as he was tackled during a scrimmage. He walked off the field, but later was diagnosed with a serious injury. A broken neck. He was flown to Hennepin County Medical Center in Minneapolis, where spinal-fusion surgery was performed.

Andrew missed the season-opening game against Mora but has been with his teammates at every practice and game since. And as usual, he joined fellow captains Andrew Linder, Jackson Weston and Jake Smith for Friday’s coin clip and watched the game from the sideline. He wears a halo brace, which keeps his head and neck from moving during the healing process. The halo will come off in a couple months, followed by a hard neck collar for another month.

“I'll have a full recovery,” Andrew told me after the game.

A year ago, Andrew led the Thunderhawks in tackles. Last summer he accepted a scholarship offer to play football at North Dakota State. His football playing career is undoubtedly over, but he is one lucky young man.

Andrew is thankful for the support he has received from his hometown and well beyond. Being able to remain part of the team is especially important to him.

“It’s really important, especially to kind of show my team I'm there for them,” he said. “And the support from my teammates and friends and family is great, it helps a lot.

“I’m feeling good. It’s been hard, especially with football and knowing I don’t have a great chance of playing. But I’m happy I’m walking. I keep my head up high.”

A motto for the North Branch football team is “Family.” For the players and coaches, including head coach Justin Voss, that concept extends well beyond the shirts on which the word is printed.

“I don’t want that to be a loose term,” Voss said during another Sunday phone chat. “Our guys have invested in that. We show love by sacrificing for each other. We want to show it on the football field, in the classroom and in the community. The kids want to be part of that and welcome others in. We talk about attitude, effort and family.”

As the teams warmed up Friday night, Voss sprinted from the field and over the eight-lane track to a fence. He ran to a little girl named Molly and hugged her. Voss is a special education teacher who works with severe profound children. Molly is one of his students.

“I love it when they come to the games,” Voss said during another Sunday phone chat. “I tell them to call me over so I can come and say hi.”

Voss and his wife Erin welcomed their third child, son Crew, two weeks ago and Justin is on paternity leave from teaching. Their daughter Sawyer is three years old and their son Lincoln passed away at birth in 2017. 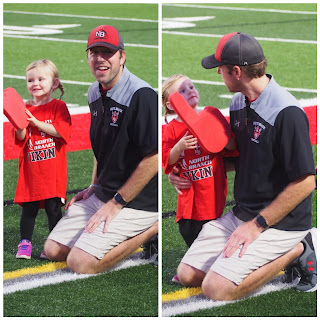 A new family tradition has been started this season. Before the starting lineups were introduced, Voss leaned over the fence and picked up Sawyer. He carried her to the bench, a few feet from the players who were being introduced. She carried a red foam finger, she clapped for the Vikings, she smiled at her daddy.

“She was really excited about being there,” Justin said. “High school sports are so enjoyable and so fun and I want her to see that. She just loves being out there. I want her to experience the joy and the fun of being part of the family.”

North Branch is 5-0 for the first time in a long time. Voss, an Albany native, became head coach four years ago.

“It isn’t really Xs and Os,” he said. “I tell our guys it’s about attitude and effort. I’m a real positive person, I really believe in that. Football’s a grind and it can get long. Keeping that positive mindset and building each other up really helps.

“I want our guys to show kindness, and we talk about that; ‘In school at lunch, if you see somebody sitting alone, sit with them. Pull them in.’ That’s something I want to keep working on, helping people outside the football arena.”

Before Friday’s game, North Branch activities director Andrea Schmidt said to me, “Justin is our Ted Lasso.” (The actor Jason Sudeikis plays an American football coach named Ted Lasso – in the TV show of the same name – who is hired to coach a British professional soccer team. Despite having no soccer experience, he does the job with a positive attitude and always looks on the bright side.)

With Voss being on leave, Schmidt suggested he watch the show.

“I just love that show,” he said. “It’s funny and in the same breath you’ll cry. It really captures what coaching could and should be about.”

I met Greg Spahn years ago when he invited me to his football team’s annual Victory Day, a Saturday morning event in which children who are physically or cognitively disabled get to experience the game of football as a player, cheerleader or in some other capacity. It’s a remarkable event that provides unlimited joy for the participants, the varsity football players who join them on the field, the parents and others.

After Friday’s game, I told Justin that Victory Day provided my introduction to Greg. He said he was aware of Victory Day, which is held by high school teams around the country, and he planned to talk to Spahn in order to learn more.

From a young man in a halo brace to a little girl cheering for her dad’s team to high school kids who are learning what’s important, the lessons remain clear.

Every time you show up, you never know what you’ll see. And you might see something very special. 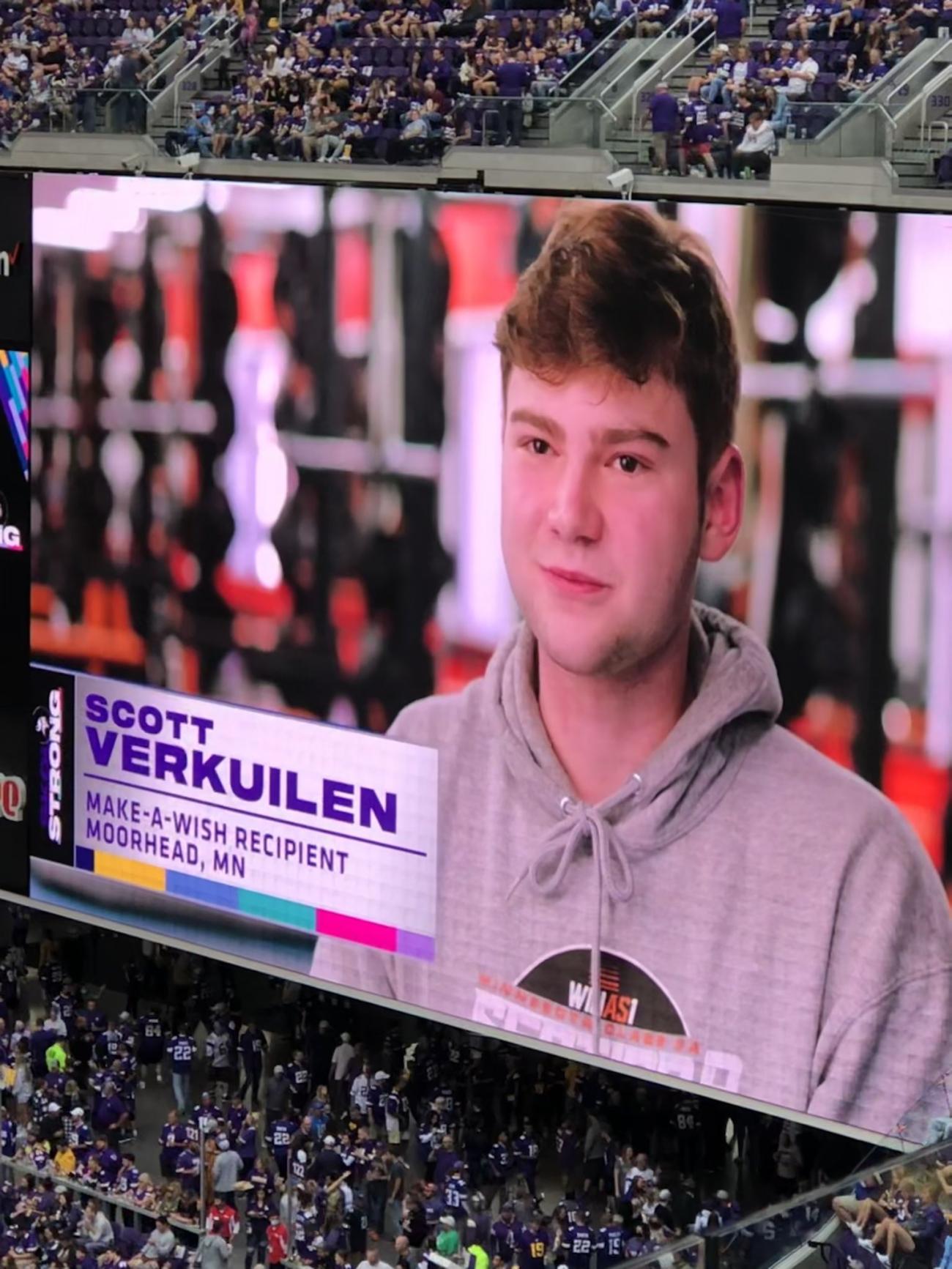