In 2009, She Was The First Female To Compete At State

Elissa Reinsma made history in 2009 when she became the first female to qualify for the state wrestling tournament.

In continuing to count down my favorite John’s Journal stories from 2021-22, today’s Honorable Mention story is a profile of one of the pioneers of girls wrestling in Minnesota. Elissa Reinsma of Slayton was a sophomore wrestler at Fulda/Murray County Central in 2009 when she became the first female to qualify for state.

In an unforgettable moment from the 2022 state tournament – the first with girls-only competition – Elissa was called to the center mat at Xcel Energy Center before the state championship matches began. As her accomplishments were announced to the crowd, she received a rousing standing ovation.

Elissa Reinsma Wieneke would never refer to herself as a pioneer, as others do and will. The 29-year-old, however, is feeling pride this week in knowing that the 2022 state wrestling tournament includes a division for girls.

This is the first MSHSL state wrestling tournament to include female-only brackets, but this is not the first time fans will witness girls on the mat. As a team member at Fulda/Murray County Central, Reinsma broke that barrier when she qualified for state in 2009 and returned in 2011 (she was injured in 2010). The only other girl to wrestle at state was Emily Shilson; competing for Centennial and Mounds View, she went to state in 2017, 2018 and 2019 and now is a member of the women’s wrestling team at Augsburg University.

Elissa's brother Justin, then a senior, wrestled at state for the fifth time in 2009, making them the first brother-sister duo to qualify for state.

I was at the Class 2A Section 3 wrestling tournament at Luverne High School in 2009 to witness Elissa clinching her spot at state. She placed second in the 103-pound division at the section meet.

With a trip to the state tournament on the line and the match winding down, sweat dripped from the hardworking young wrestler's face. Exhaustion was near, but there was no letup. A cotton ball, stuffed into the wrestler's left nostril, stemmed the flow of blood.

And she didn't mind a bit.

Standing 5-3 and weighing barely 100 pounds, Elissa Reinsma doesn't look the part of a wrestler when she's wearing a T-shirt, jeans and sneakers. But when she hits the mat, she makes things happen.

“It doesn’t seem that long ago,” Elissa told me this week. “It’s crazy. Time just flies.”

Also a volleyball and softball player in high school, she played college softball while attending Augustana University and Southwest Minnesota State, graduating with a degree in sports management and minoring in coaching.

She lives and works in her hometown of Slayton. She’s the director of Community Education at Murray County Central, will begin her first season as MCC’s head softball coach this spring and is the first female member of Slayton’s volunteer fire department. Her husband, Nathan Wieneke, is a fourth-grade teacher at MCC and the school’s head baseball coach.

Murray County Central activities director James Wajer, who was Elissa’s softball coach in high school, said she is one of the hardest-working people he has ever known.

“What defines Elissa is she’s a perfectionist and she outworks everybody,” he said. “I think she learned that from an early stage and wrestling certainly teaches all those things. She was always a coach’s dream. She had to be kicked off the diamond sometimes if she was struggling because she wanted to stay and work on things. You had to say, ‘Hey, sometimes we have those days, go home and relax.’ ”

Elissa wrestled against only one girl in her high school career. Her record was 32-10 as a sophomore and 32-7 as a senior. She was unable to win a match at state.

Her memories from those state tournaments include lots of cameras focused on her.

“I was starstruck,” she said. “I felt like I was pretty humble, I had been wrestling since kindergarten. But to me it didn’t feel any different. And when you’re in high school you don’t think about how big things are. It was amazing. Hard work pays off for a reason.”

She’s thrilled to see girls having their chance to shine at the 2022 state tournament.

“For me it was weird going up against girls,” she said. “But now that there’s enough to have it, it’s great. Time flies, and look at what can change.”

She said the lessons she learned from wrestling have remained with her.

“The fire department had no question about hiring me because they knew I had what it takes,” she said. “When I face adversity, nothing will be harder than wrestling.”

Wajer said, “She’s the first female in the fire department, and you talk to any of those firefighters and she’s one of the best they’ve ever had. She’s one of the guys and that’s what she’s always wanted to be.” 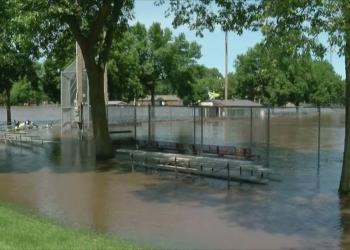