“It certainly has been special” watching Klecker, Fahnbulleh 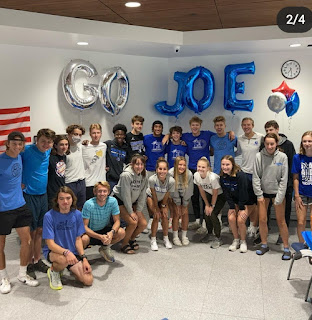 Windows were open at the home of Hopkins High School boys track and field coach Nick Lovas early Wednesday morning as he watched the men’s 200-meter final at the Tokyo Olympics.

“If my neighbors ask what all the yelling was about, I’ll tell them,” he said with a laugh a few hours later.

Two former Hopkins track athletes competed at the Games. Joe Klecker, a 2015 graduate and nine-time All-American at the University of Colorado, finished 16th in the 10,000 meters last week. Wednesday morning’s big show – and the cause of supportive vocalization back home in Minnesota -- was the men’s 200, featuring 2019 grad Joe Fahnbulleh.

After the semifinal round, Lovas and Fahnbulleh talked via FaceTime.

“He really seemed grounded,” Lovas said. “He seemed at a place where he was appreciating the moment of being at the Olympics and also realizing that there’s kind of a new normal in his life. I could sense that Joe was recognizing there’s a new normal of being a world-class-caliber athlete and not just a Division I All-American.

“He was very humble. He told me he was going to leave Tokyo happy with a top five finish, which was his goal. Of course everybody would love to win a medal and have that be part of the story. But as a 19-year-old, that chapter might be in the middle of the book and we’re just at the start.”

Fahnbulleh was named the 2019 National Senior Boys Track and Field Athlete of the Year by the National High School Coaches Association (he also captained his high school cross-country team). He holds Minnesota high school state records in the 100 and 200 meters and was a member of 4x100 and 4x200 relay teams that also hold state records. Now at the University of Florida, he was the NCAA outdoor champion in the 200 meters this spring.

Fahnbulleh competed at the Olympics for Liberia, where his parents lived before coming to America. He has never been to Liberia, and his trip to Tokyo is his first time outside the United States.

I watched Fahnbulleh compete many times while he was in high school. I’ll always remember the first time we chatted, as well as his final high school appearance.

Our first interview took place on the infield turf at Hopkins as a cold spring fell rain and we stood under my umbrella during a break in practice. It may have been the first time he was interviewed by a journalist, but he was personable, friendly and open. I had a hard time getting him to talk about himself, because he wanted to talk about his teammates, coaches and school. He never stopped smiling.

His high school career ended with the 2019 state championships at Hamline University. Following his final race, I asked him about wearing the jersey with the Hopkins "H” for the last time. He looked down at his chest and touched the H.

“The H on my chest? It means a lot,” he said. “It will be forever ingrained in me. Because this is where I made my mark, this is where my journey began as an athlete. Hopkins gave me the most opportunities ever. Hopkins has been behind me 100 percent.

“You take away me being a good athlete, as a person Hopkins has always been there. Coach Lovas, (principal) Doug Bullinger, it means a lot. And it means a lot because I came here with my boys. My boys were the ones that pushed me here. Without them I wouldn’t be the person I am today. That means a lot.”

Wednesday morning, after watching Joe race at the Olympics, Lovas struggled to describe what he was feeling about Klecker and Fahnbulleh.

“I’m not sure I can even put it into words yet,” he said. “To be able to use words to explain how proud I am, and how proud we all are; the words would be lacking the emotion of the smile and the hug and the high five that we all shared during their careers. It certainly has been special.”

An extra-special part of the story is the relationship Lovas’ three sons -- age 6, 8 and 10 – have with the Hopkins Olympians.

“Their character and how they have used their character with everybody around them; it’s the best thing about being a coach, how your athletes surround the young people in the community as role models. And when your own kids are involved, it’s so meaningful.”

“He was very humble. He told me he was going to leave Tokyo happy with a top five finish, which was his goal. Of course everybody would love to win a medal and have that be part of the story. But as a 19-year-old, that chapter might be in the middle of the book and we’re just at the start.”
Nick Lovas