John’s Journal: How It Started, How It Ended

From A Hot August Day To A Cold November Night 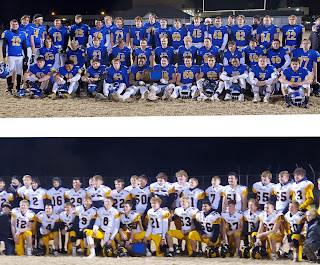 WASECA – Aug. 24 was a sunny, hot and humid day in southern Minnesota. The girls tennis teams from St. Peter and Waseca opened a shortened, strange season with a dual match on the courts at Waseca High School.

After visiting that match, I wrote, “No fans were allowed inside the fence that surrounds the eight tennis courts. There are several small sets of bleachers in the middle of the courts, but they were turned upside down. Fans sat on lawn chairs and watched the girls play while looking through the fence, the view made difficult by dark wind slats in the fence.”

At that point, the football and volleyball seasons were going to be played in the spring of 2021. That decision was later reversed by the MSHSL board of directors, making the 2020 volleyball and football seasons a reality … a shortened, strange reality.

The fall seasons ended abruptly on Nov. 20 under orders from Governor Tim Walz that also shut down winter sports until at least Dec. 18. So I returned to Waseca for the final day of the fall season and final event on the Bluejays calendar, a football game with Plainview-Elgin-Millville to determine the champion of Section 1 in Class 3A.

The conditions were quite different from that bright, warm day in August. The sun sets early in November and frigid air rolling across the prairie presented this sight on the P-E-M sideline: football players draped in long, black sideline coats, which covered everything but bare-skinned calves. The crowd was small due to season-long Covid-19 limitations; Waseca had more cheerleaders than students in the student section. When a recording of the school song was played after touchdowns, the gloved hands of the Bluejays fans clapped along. The voice of referee Royce Ruter could be heard announcing penalties even though he wasn’t wearing a microphone. The grass was brown.

On Waseca’s first play from scrimmage, senior quarterback Ryan Dufault ran through the line and broke into the open as KFOW radio play-by-play guy Don White hollered, “There goes Doofy!” And Doofy went 85 yards for a touchdown that got the Bluejays going in a 23-8 win.

The broadcast went to a commercial for a local bank after the extra point, but the radio guys – White and Dale Kugath – unknowingly conversed on hot mics: “You think Doofy will run for 100 yards?” “It could happen on the next play!”

It was that kind of Friday night for Waseca. A triumphant victory in the last game of the season, a quiet celebration afterwards. And then, before heading home, they all needed to turn in their equipment because no one knew when they would be able to gather again. On Monday the high school went to distance learning for everyone. No one knows if the football team will be able to hold a traditional end-of-season banquet.

In his postgame address to the team, Bluejays coach Brad Wendland first spoke to the seniors and their lives after high school. “Fulfill your dreams,” he said. “As far as us coaches, our dream is you. You're our dream and we're living that, coaching you guys. And we fulfill that every day. Now use high school football to go live out your dream and what you want to do.”

Among the seniors who played their final football game were Dufault and Kyreese Willingham. Both will play college basketball and both hope against hope that there will be some semblance of a normal high school season in that sport. Last winter, the Bluejays won their section title and were headed to state a week later before that tournament was canceled.

Asked about the winter sports shutdown, which will last until at least Dec. 18, Willingham -- who will play basketball at Minnesota State Mankato – said, “I’m mad. I don't even know what to say about that. I just hope we get a season, especially after last year.”

Waseca was the Class 3A boys basketball state runner-up in 2019, losing to DeLaSalle in the title game at Target Center to end a 30-2 season. Their record was 25-5 last season when everything stopped.

“It stinks but at least we still get something,” said Dufault, who will be part of the first NCAA Division I men’s basketball team at the University of St. Thomas. “We're lucky to even get something, with this pandemic going around. I'm just hoping that we get to play some games and play together one last time. And hopefully, if it's possible, to play in a state tournament.” 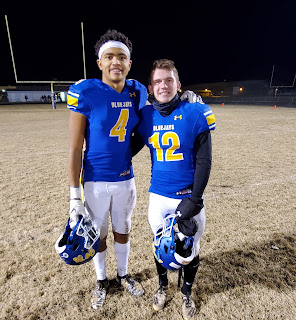 Willingham (No. 4, pictured with Dufault) said of his final football game, “It’s been a blessing to be able to get out here and play one last time, in our senior year. And this is a pretty sad moment for us because we could have gone to state after this, but it's always good just to know that you got to finish the season on a good note.”

After the game ended, the players from Plainview-Elgin-Millville and Waseca went through a semi-traditional handshake line, but instead of shaking hands they clanked the helmets that they held in their hands. The Bluejays walked back to their sideline and sang the school song with the fans, then all took a knee in front of Wendland.

The coach held the section championship trophy over his head before asking the four captains – Dufault, Willingham, Marcus Hansen and Marco Cruz -- to come to the front of the group and hold the hardware.

“Seniors, stay in touch,” the coach told them. “You're so important to us, we value you so much. If we can help you, if we can write a letter of recommendation, if you need anything from us; you better ask, we’ll be mad if you don't.

“I remember when you were playing third-grade football. I remember going home and telling my wife, ‘We're gonna be good.’ We're going to miss you and we love you and thanks for everything you did for the program. You leave this place better than you found it. You won the section three years in a row, and you gave up eight points in the section finals. I couldn't be prouder. I just wish we were practicing for whatever the next thing is.”

I just wish. Those words seemed very apropos because everyone knew that they had reached a point in time, a point with a clear delineation between what they knew (football) and what they really didn’t (all-virtual learning and no after-school activities). For weeks, half the students had been in school each day while the other half did their work from home.

“Oh, it’s terrible,” Willingham said. “You don’t get to see half your friends at school. Not all your classmates are in class and it's our senior year so you want to see all your friends and enjoy the senior year, but we can't this year. We’re still trying to make the best of it.”

The Waseca football team was hit hard by Covid-19 all season long. They played seven games, four of them involving changes in opponent and/or dates. The Bluejays had players miss every game due to the virus, including four starters Friday against Plainview-Elgin-Millville.

“It’s been so full of anxiety,” Wendland said. “The uncertainty is challenging daily. Every time an administrator walks by my room, every time my phone goes off, I worry. But then you get a couple games in, and it kind of feels a little bit normal. And then as soon as you get the least bit complacent, Covid just brings it right back. The minute you feel like, ‘All right, let's game plan, our guys are ready to go.’ That's when it strikes.”

With the season over, Wendland is concerned about what the month-long shutdown will do to the mental health of the kids.

"I worry about them. I do. I was worried that this (football) was not going to be here for them. And I worry about kids in the winter. Having extracurricular activities is such an important part of their daily lives, and their interaction with positive adults and interaction with their friends.

“And with that taken away, I worry about the young men, for sure, and their well-being and their future, asking ‘why me?’ and maybe turning to alternatives. It's frightening. It’s terrifying.”

“It stinks but at least we still get something. We're lucky to even get something, with this pandemic going around. I'm just hoping that we get to play some games and play together one last time. And hopefully, if it's possible, to play in a state tournament.”
Waseca senior Ryan Dufault