State Tournaments Are Back And Spring Sports Have Sprung

Today is a great day. It’s the 10th day of April in 2021 and by all appearances we are in a much better spot than a year ago. The winter state tournaments are culminating today at Target Center – where I’m sitting as I write this – with boys basketball state championship games. And spring sports are underway all over our great state, and that’s even more cause for celebration.

How to sum up what we’ve been through over the last 13 months? I don’t think I am capable of expressing the emotions, the doubts, the uncertainties, the questions with so few answers. Let’s start with the basic timeline …

Spring 2020: Spring sports in Minnesota are wiped off the face of the earth. No season.

April 2021: An abbreviated, late-starting winter season concludes with state tournaments, limited spectators and varying formats. At the same time, spring sports are on track for a normal season, and happiness abounds.

It’s been quite the wild ride so far, huh?

We can’t forget the kids from the class of 2020 who missed out on so much, whether it was a chance to compete for a basketball state championship, take part in a spring sport or not experience a normal prom, graduation or even school. They will never get those moments back, and that is so regrettable. We owe them so much.

Back when the world turned upside down, I invited coaches, athletes and administrators to write about what was happening. I posted many such notes from around the state on John’s Journal a year ago. Today I’ve been reading through those, and it seems like it was so long ago. Here are a few excerpts …

For all we are going through now, many people have it much worse so we will focus on that in our daily "new normal" lives. We told our team today that they are being the ultimate team players. They are making a sacrifice to protect the people who aren't as strong (I stole that from an online post). We also told our players to never wish away a day, even if some of the days will be not so fun. It's easy to cherish every day when they are fun and easy days, but true leaders will cherish every day, even the tough ones.

We are all being called to a different kind of competition of sorts right now. It’s a “bigger-picture” competition. We are being asked to perform a difficult, civic responsibility for our own health and the health of our neighbors in our community and world, and to live up to that challenge of isolating for a bit. This is an important and serious task. We’ve been prepared for this. Our coaches and advisors have taught us well about resiliency, challenges, planning, hard work, overcoming obstacles, and achieving success.

It’s an interesting and difficult time. It’s still a time to coach and be coached. We can do this!

There’s no doubt that this is an incredibly difficult time for our players. Many have lost competition opportunities this past winter and will lose their opportunity to compete this spring. This difficulty is eased by the promise of better days. If we all do what is needed and not what is easy, those better days will come sooner rather than later.

At 7:20 a.m. on this Saturday a Twitter message was posted from the Jackson County Central softball team account (@4theHUSKIES)

Let’s ponder that: 98 weeks, 686 days. So much has been lost and yet we have so much to be thankful for. Let’s begin with all the administrators at every school in Minnesota. They have worked so hard behind the scenes, doing everything possible to keep kids and families safe. And all the custodians who cleaned and disinfected every space. And the food service professionals who took extra, important care in their work on behalf of students and staff. And coaches who made sure they and the athletes in their care followed protocols and remained safe. And officials who ensured games could be played.

The MSHSL office has a small, tight-knit staff and nothing has been normal there for the last 13 months, just like everywhere else. Employees have worked from home, online meetings have been constant and critics have been unyielding. The professionals who work for the MSHSL on behalf of your school -- most of whom have names you will never hear – have worked tirelessly on behalf of every participant, every team, every school and every community. Tears have been shed by these folks. There have been sleepless nights. Angry, obscenity-filled phone calls have been answered. Angry, obscenity-laced emails have been read.

In the midst of that, quieter messages have been heard. The angry make the most noise, but the appreciative are always with us. A constant message has been received throughout these 13 months, a message conveyed to schools as well as the MSHSL: Thank you for doing this hard, next-to-impossible work, under the worst conditions imaginable. Thank you for standing up for what’s right, and for what’s best for the kids.

On Oct. 1, 2020 I posted this Twitter message after a revised calendar for winter sports and activities was approved by the MSHSL board of directors:

Shortly after 1 p.m. Friday, the girls basketball teams from Minneota and Belgrade-Brooten-Elrosa tipped off in the Class 1A championship game. At 9:36 p.m. Saturday, the final horn blew on the boys 4A title game between Cretin-Derham Hall and Wayzata. That horn signaled an end to our winter state tournaments; not long ago we weren’t sure if they would take place at all.

Two photos from this weekend stand out to me. One shows Waseca head boys basketball coach Seth Anderson, his father/assistant coach Tim Anderson and their son/grandson Jack, posing with the Class 2A championship trophy. It is pure joy. 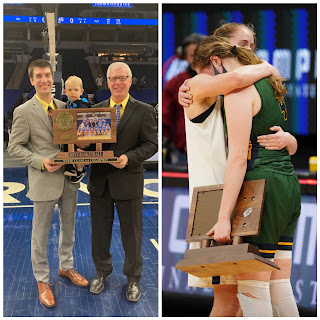 What might be the most impactful photograph of the winter sports season ... and maybe the entire last 13 months … was taken Friday night by John Muhlenpoh, who along with Tim Kolehmainen are talented professional photographers hired by the MSHSL to chronicle our championship games. It’s a photo of Chaska’s Kaylee Van Eps and Rosemount’s Helen Staley following Chaska’s two-point victory over the Irish in the Class 4A title game.

Both are seniors, both had just played their hearts out in their final high school game. Helen is holding the state runner-up trophy, her head resting on Kylee’s shoulder as they embrace. Helen had taken the game’s final shot, a three-point attempt that was ever so slightly off target. She scored a game-high 17 points but the shot that she wanted the most didn’t go in. I think the photo epitomizes the difference between winning and losing, and how sportsmanship really matters.

The games were played, the winners were elated, the runners-up showed tremendous grace.

Well done, everybody. Let’s have the best spring ever.