Albany Hosts Foley At One Of Its Three Home Showplaces 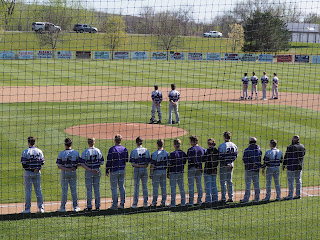 AVON – The baseball team from Albany High School just might be the luckiest outfit in Minnesota. In this case, the word “luck” doesn’t have anything to do with rabbit’s feet or horseshoes or walking under ladders; it’s the good fortune of having three magnificent home fields.

The Huskies’ day-game haven is Avon Lakers Field, which sits a long fungo off Interstate 94 in this Stearns County village of 1,608 souls. There are no lights in Avon, but the excellent options consist of lighted, equally heaven-sent ballfields in nearby Farming and St. Martin.

Avon was the site for a Granite Ridge Conference game Tuesday, with the Foley Falcons in town. This was certainly a big game but probably not exactly a BIG game, considering it’s early in the season. But facts are facts and the Huskies came in carrying a 6-0 record and the No. 1 ranking in Class 2A, with Foley 9-0 and ranked second. The implications included rankings and conference standings as well as the Section 6 playoffs.

It was a grand scene, with the first pitch scheduled for 5 p.m. The teams took swings in a batting cage and held the traditional pregame ground- and fly-ball drills (the Beach Boys’ “Good Vibrations” played while the Huskies did so). The first pitch came six minutes past 5 and absolutely no one cared.

The ballpark is one of the many diamond jewels in our state. The grass is immaculate, the dirt is clean, strips of artificial turf are installed in front of each dugout so there are no signs of wear.

When public-address announcer Maddie Schmitz – an Albany grad and senior at the College of St. Benedict – asked everyone to remove their caps and face the flag for the national anthem, at least one first-time visitor to the Avon park noticed that there was no banner at the field. Didn’t really matter, because everyone looked toward a giant flag flapping in the breeze in front of Blattner Energy’s headquarters building, half a mile away on the other side of the interstate. It worked. 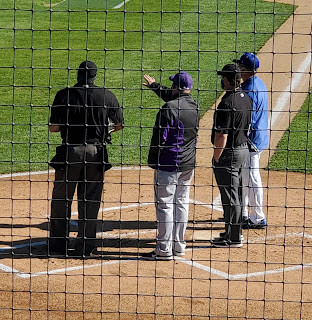 Randy Rothstein of Albany’s KASM radio called the action, noting in the early innings that Thursday’s scheduled “Word for Today” program, including recitation of the rosary, would be heard in its entirety after the game.

It was clear from the start that the day had a standout athlete. Foley senior Ryan Chmielewski laced the first pitch into right field for a single. The Falcons didn’t score in the first inning, but the bottom of the frame sent the message that Foley wouldn’t need much offense to win the game. That’s because Chmielewski, a lefty, was throwing darts.

Albany’s Zach Moritz singled before Chmielewski struck out the next three Huskies in the first. Ethan Navratil hit a double in the sixth and Robert Schleper singled in the seventh, and that was the sum of Albany’s offense. Chmielewski struck out 12, walked one, threw 98 pitches and the Huskies only got one runner past second base.

“He was good. We knew he'd be tough,” said Albany coach Al Amdahl. “This is maybe his fourth start and we've seen probably three of the teams that he faced and they all said he was very good. I thought we could have maybe had a little better of an approach but he mixes things up, throws a good firm fastball and nice tight breaker.”

“All of our pitchers have done it all year.” Foley coach Mike Beier said. “We looked the other day, and we had something like 165 outs and half of those have been strikeouts, so our defense hasn't had to work too hard. … (Chmielewski) has had a perfect game, a no-hitter; he's around the plate, he's not walking guys, and that's what's impressive.”

While their pitcher’s performance was no surprise, a couple of eye-opening power hitters keyed Foley’s offense. The game was scoreless until No. 9 hitter Logan Thorsten hit a solo home run over the left-field fence to open the fifth inning, and No. 6 hitter Hunter Gorecki hit a two-run blast to almost the same spot in the seventh. Both are seniors who had never hit a varsity homer.

“That's funny because I said before the game that I don't think I've never seen a home run in this park,” said Beier. “It just looks so deep out there but the ball did carry well. So yeah, I was surprised, definitely.”

Beier said the game, in his eyes, wasn’t really a big game, “but I was getting emails and text messages from everyone. I was like, ‘Man, this is early May,’ and we're going to see them maybe three, four times this year and obviously there’ll be a lot bigger games than this when you get into June.

“You want to win it for conference and sections, but I wanted to learn more about what they had. I haven't seen these kids in two years, and they had a good team, so I wanted to see how good they were. And they battle up there.”

Amdahl said the next step for the Huskies is how they respond.

“We’ll see how we bounce back. We knew Foley was going to be very good. We weren't the better team today so we'll see what happens. We’ve got a doubleheader with Zimmerman Thursday.”

Those games will be played on another immaculate field, this one in Farming, with lights.