Kylen Running Hawk Is Committed To The Arts, His Culture, His School And Community 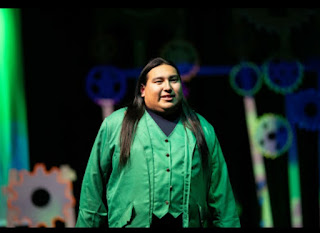 Kylen Running Hawk is generally a quiet, somewhat shy young man. But when it’s time to perform -- in the choir at Morris Area High School, or a school theater production, or the speech team, or mock trial – he has a commanding presence.

It’s an amazing story of a student who found his passion in the performing arts despite a language barrier, hearing loss and other obstacles. Kylen plans to study education in college, with an emphasis on choir and theater, with hopes of teaching those art forms to Native American students.

For his commitment to the arts, his culture, his school and community, Kylen is the 2021 recipient of the MSHSL Heart of the Arts Award. The statewide honor makes him one of 50 similar winners in the program, which is sponsored by the National Federation of State High School Associations.

His fascination with theater began at a young age while watching televisions commercials for the Medora Musical, an annual summer event in the North Dakota town of Medora. Billed as “an ode to patriotism, Theodore Roosevelt, and the Great American West,” the show includes singing, dancing and a variety of acts.

When Kylen attended the show in person for the first time, “It was the most spectacular thing I ever saw in my life,” he said. “That really drew me into trying out theater.” 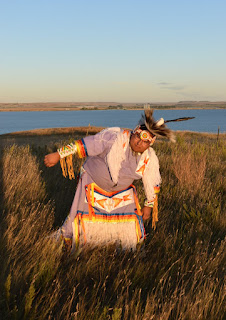 After his family moved to the western Minnesota city of Morris in 2013, Kylen’s first theater role came in The Princess and the Pea at St. Mary’s elementary school. With deafness in his left ear – which several surgeries were unable to repair -- he learned to read lips and understand English along the way. His process for memorizing lines is not typical.

“It took me a while to learn my lines for musicals or plays,” said Kylen, who is president of his school’s Drama Club. “But by the time we're two weeks or more before our show, I'll be able to get all of them in. Because English was my second language, it took me a little bit, and I'm still learning some big words today.”

Kylen is very proud of his heritage. He enjoys donning traditional Lakota costumes and performing at powwows, parades and other events. Sometimes he walks to and from school in the winter as a way to remember and honor his ancestors, including those who were at the Battle of the Little Bighorn and the Wounded Knee Massacre.

“My Lakota heritage means I'm from a people who were strong to the end,” he said. “I walk in the winter because it reminds me what my family had to go through. I remind myself of all my ancestors who have passed before me, and to always keep them in my heart, to always remember the ones who helped me throughout my life.” 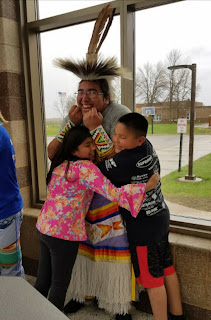 Seth Kelly, who teaches English, literature and is involved in theater and other activities at Morris Area High School, said Kylen is humble but fearless.

“Kylen will take on anything and be excited and be able to contribute in any way,” Kelly said. “We started mock trial last year and Kylen was first in line to sign up because it's another way to perform and to embody a character. He brings the kind of spirit into anything that makes everything more fun for everybody.”

Kylen was accepted into the prestigious Perpich Center for Performing Arts in suburban Minneapolis for his senior year of high school but respectfully declined due to the Coronavirus pandemic. He will attend the University of Minnesota, Morris in the fall. After college he would like to share his talents with Native American students.

“I'm a kid from our reservation who has the joy of being into the theater, where other kids have never had that experience,” he said. “I’m thinking about bringing theater into the reservation. I've always wanted people from my reservation or any other reservations to get a chance, because the only way that we get to experience this is to go off the reservation to other schools. And that's why there's not that many Native American actors; not many kids are exposed to this kind of thing.”

“Kylen brings arts and celebration of culture in a way that greatly enriches our school and community,” Kelly said. “I’ve never worked with a kid in the arts who has had more obstacles yet has taken more out of what he does.

“Kylen wants to be in everything and do everything. Even with obstacles, it’s amazing. He brings a very awesome, unique element to it.”

Congratulation to Kylen Running Hawk, the 2021 MSHSL Heart of the Arts recipient.

“My Lakota heritage means I'm from a people who were strong to the end. I walk in the winter because it reminds me what my family had to go through. I remind myself of all my ancestors who have passed before me, and to always keep them in my heart, to always remember the ones who helped me throughout my life.”
Kylen Running Hawk