Selfless Moorhead Athlete Makes A Wish For Others 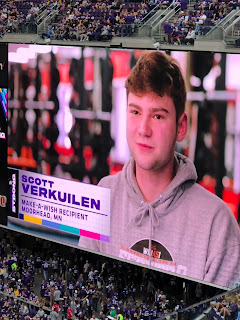 Scott Verkuilen, who graduated from Moorhead High School in 2020, was honored at halftime of the Vikings game against Detroit on Sunday. As noted here on John’s Journal in May 2020, Scott is a cancer survivor who has been treated for nodular lymphocyte-predominant Hodgkin lymphoma.

When Make-A-Wish Minnesota asked him last year what they could do for him – meet a celebrity? … take a family trip to an exotic location? – his wish was simple. Scott wanted future generations of Moorhead students to have access to a top-flight weight room. And that’s exactly what happened.

“I thought what better way to not only better myself but to help those around me,” Scott told me in May 2020. “That pay-it-forward movement, treat others as you would like to be treated. I knew the school was getting redone and I knew sometimes those expenses get overlooked.”

A donation from Make-A-Wish was followed by gifts from Power Lift, a company specializing in weightlifting equipment, and similar firms Intek Strength and Dynamax, as well as the Moorhead school district. The new weight room will receive approximately $200,000 worth of donated gear. 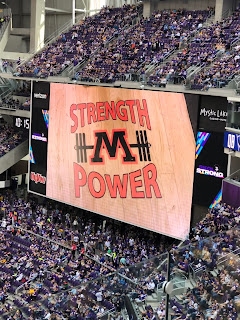 More big news came Sunday when the Vikings surprised Scott with a major announcement. He is going on a great trip after all, to the 2021 Super Bowl in Los Angeles.

Here’s the story I wrote about Scott last year …

Selfless Moorhead Athlete Makes A Wish For Others

Scott Verkuilen was at pretty much rock bottom last August. Shortly before his senior year and final football season at Moorhead High School was to begin, he was hospitalized. There was surgery. Then chemotherapy.

He was, as he told me recently, "really, really sick."

He was undergoing treatment for nodular lymphocyte-predominant Hodgkin lymphoma, which is as scary as it sounds. Visitors from Make-A-Wish Minnesota were with Scott in the hospital, asking if he had any wish that they could help fulfill.

The options were amazing. Did he want to go skydiving with Dwayne The Rock Johnson? How about traveling to Australia or another exotic location?

Verkuilen talked with his parents about the possibilities. “The options were completely wide open,” he said.

But Scott also thought about Moorhead. He had lived in Little Falls until sixth grade before moving to Moorhead. And he loves Moorhead; his friends, his school, the community, the tradition, the Spuds.

Last fall, voters in Moorhead overwhelmingly approved the construction of a new high school. Verkuilen thought about that, came up with an idea and made his wish known. He wanted his school to have a world-class weight room.

“I thought what better way to not only better myself but to help those around me,” he said. “That pay-it-forward movement, treat others as you would like to be treated. I knew the school was getting redone and I knew sometimes those expenses get overlooked.”

And that's when others jumped in. Moorhead High School strength and conditioning coach Cory Herrmann, who coaches the Spuds weightlifting team, spread Scott's story and wish through contacts nationwide. A monetary contribution from Make-A-Wish Minnesota got the ball rolling. Power Lift, a company specializing in weightlifting equipment, got on board, as did similar firms Intek Strength and Dynamax, along with the Moorhead school district. Essentially, the new weight room will receive $200,000 worth of donated gear.

All the Spuds football players and coaches gathered for an online team meeting one evening last week. Representatives from Make-A-Wish Minnesota and Power Lift were also on the video call as Scott learned that his wish had been finalized and a top-shelf weight room would serve Moorhead students for many years to come.

“For a teenage kid, a high school kid, to come up and think of something like that to give back, rather than take a trip somewhere you always wanted to go, I thought it was fantastic,” Herrmann told Verkuilen.

Scott said on the call, “I just wanted to make sure that everyone knows they are not alone.”

That was a sentiment that helped carry Scott through surgery, chemotherapy, loss of his hair and everything that went into his recovery. He now has a clean bill of health. After his final chemo treatment in December at Roger Maris Cancer Center in Fargo, his teammates and other friends filled the lobby with smiles, hugs and cheers as Scott rang a celebratory bell.

“Before all this happened, I would have told you Scotty was one of those guys who was wise beyond his years,” Feeney said. “He’s a very mature young man. Going through this process, I could not believe how he handled it and how he consistently worried about everybody else and not himself.

“Our team learned so much, like you’re never alone. Our team rallied around him. The kids who went through this with him understand his legacy. He was as strong as he could be and more selfless than he should have been. This group understands that legacy and it will be easy to keep that legacy more visible for future generations.” 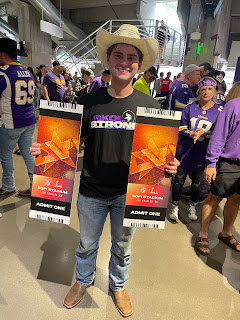 Scott will enroll at Concordia College in Moorhead this fall on a pre-med track with the goal of becoming an oral surgeon. It will be a grand day, in three years or so, when he helps cut the ribbon on the weight room that will have his name on the wall. Weight plates will bear some of his signature phrases, such as “Never Alone.”

The Moorhead weightlifting team began when Scott was a ninth-grader and he loved it from the start; the room, the work, the support, the goal-setting.

“The team was really important to me and coach Herrmann has been a mentor for me,” he said. “He gave us an opportunity to be a part of something great.”

Verkuilen missed his junior football season when he suffered a hand injury during summer training. He wrestled that winter and had what he called a “decent season.”

His cancer battle began last July began when tumors were discovered in his neck. A lymph node the size of a golf ball was surgically removed. And here he is now, ending his high school days with health, a smile and a joyous attitude.

“I received a few messages from various teammates, saying this was inspirational,” he said. “I just wanted to pay it back. I hope that it inspires others to leave a mark on the world.

“It’s a dream that came true. I’m so unbelievably grateful to everybody.”