Sons Of Coaching Legend Adjust To A Season Without Him 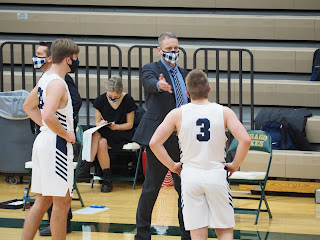 Moments before a new season began last week, Hibbing boys basketball coach Joel McDonald glanced at a certain spot inside the Bluejackets gym. It’s the area where his father sat to watch his son coach and his grandkids play, but Bob McDonald wasn’t there.

Joel and his wife Carrie have two kids; Abbey graduated in 2019 and Ayden is a junior. Bob McDonald, the Hall of Fame coach from nearby Chisholm and the father of six children who all became basketball coaches, lived in Hibbing in his later years and died in October at age 87. This basketball season in the first in 88 years without him.

It might have been an omen that in the first basketball season after Bob McDonald’s birth in June 1933, the Chisholm High School basketball team capped the 1933-34 season by winning its first state championship with a 29-27 win over St. Paul Mechanic Arts. That was the first of four state championships for the Bluestreaks and the only one without McDonald as head coach. He led Chisholm to titles in 1973, 1975 and 1991.

Joel McDonald, who was a senior in 1991 and finished his career as the state’s all-time scoring leader, was standing for the national anthem before Friday night’s season opener against Duluth Denfeld when reality struck.

“For the past number of years he was always sitting in kind of the usual spot for Abbey's games and Ayden’s, and he got to see a lot of them,” Joel said. “And ultimately you don't have him in the stands, and during the anthem it hit me.”

Bob, who retired in 2014 with a state-record 1,012 wins and was inducted into the National High School Hall of Fame, had become a constant presence at Hibbing home games. He conversed with friends, greeted officials and visiting coaches and players, and enjoyed seeing his grandkids play the family game.

“Looking over in the stands, it's just hard not seeing him over there,” said Ayden McDonald.

The Hibbing boys beat Denfeld 79-39 and on Saturday afternoon won 87-64 at Chisago Lakes behind Ayden’s 41 points. The game goes on but there is something missing for the entire McDonald family.

“I’ve thought about him a lot ever since his passing,” said Mike McDonald, coach at Cambridge-Isanti. “With basketball starting, it just brings you back."

Darlene McDonald, Bob’s wife of 43 years and the mother of their six kids, died of bladder cancer in 1997. Bob remarried in 2000, reuniting with Chisholm classmate Carol Tiburzi, whose husband had died in a plane crash.

Tom McDonald, the boys coach at Ely High School, said for years his mother has been in his thoughts during the national anthem each game day.

“Since mom died, every time we’ve had the anthem I’ve thought of her,” he said. “Now I’m thinking of both of them.”

Mike McDonald said he misses weekend phone calls with his dad. The conversations often included questions from Bob about whether his son’s teams were pressing on defense, which was a hallmark of Bob’s Chisholm years.

“I miss hearing his voice when we’d start talking on the phone,” Mike said. “That’s the major thing I miss each and every day, saying hello, how are things going. He’d also ask things like do we have any size and are we pressing.”

Mike, whose team played its first game Tuesday night, watched the Hibbing-Chisago Lakes game online and noticed that Joel was wearing a suit and tie. That was no surprise, because that’s how Bob dressed for games and his sons have done the same.

“I saw Joel wearing his (suit and tie), and I’ll wear mine, as I have worn for every game I’ve coached,” said Mike. “That’s in reverence to (Bob). I know he’s watching over us. That’s a way I show that I remember him and I appreciate his influence on us.”

After Hibbing’s first game, Joel and Ayden talked about Bob during the drive home.

“It was tough,” Joel said. “Ayden said it was really different not having Grandpa here and I agreed with him. It was one of those conversations that was short and then quiet on the way home, because I think both of us were fighting off tears.”

“For the past number of years he was always sitting in kind of the usual spot for Abbey's games and Ayden’s, and he got to see a lot of them. And ultimately you don't have him in the stands, and during the anthem it hit me.”
Joel Hibbing