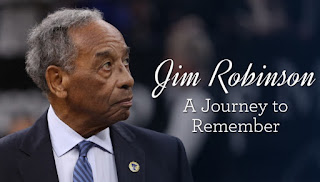 For three decades, there was a behind-the-scenes routine after nearly every girls and boys basketball state tournament game. It involved officials, who were visited in their locker room after the contests. When the officials exited, they were often met by officiating colleagues who almost always posed the same question, “What did Jimmy say?”

Jimmy was Jim Robinson, who was the MSHSL’s state coordinator of basketball officials since 1991. He died recently at age 88, serving in his position with the MSHSL until the end. Jim was a history-maker, a barrier-breaker, a giver and a soft-spoken advocate for basketball and officials in every corner of Minnesota.

“The guy lived in the gym. He was in a gym three or four nights a week to watch referees and kids. You’d ask Jimmy about an official, ‘Do you know this guy?’ And he had an immediate answer for very official, hundreds of them. He knew them all.”

That was Jimmy’s job, and he took it seriously. He watched games from the start of each season through the state championship games, jotting down notes as he watched officials, consulting with them after games, and making friends everywhere he went.

It seemed like everybody knew Jimmy. Former Apple Valley star and current NBA veteran Tyus Jones Tweeted after learning of Robinson’s death, “RIP Mr. Robinson. Since I was an 8th grader we would have great conversations every time we were in the gym together. Supported me from day 1 and I never took that for granted. You will be missed! MN Legend.”

Jimmy was a 1951 graduate of Mechanic Arts High School in St. Paul, graduating in three years instead of four and inducted into the National Honor Society. Although initially discouraged about attending college by a high school counselor, he attended the University of Minnesota, Metropolitan State University and Bethel College. He earned a bachelor’s degree in Youth Studies along with a related master’s degree.

He contributed to the community and its youth in many ways in St. Paul and beyond. Since 1967, Jimmy served as executive director of operations and development at Summit University Teen Center, also known as The Loft. He worked with kids, families and groups to deal with issues of upbringing, athletics and recreation, education, employment and occupational opportunities, neighborhood justice, housing, social services and social justice, juvenile crime, and the court and justice system.

Jim was a leader from an early age. He was the first African-American named the city’s student school patrol leader. As a teenage he was voted mayor of the American Legion Boys State program, the highest honor awarded at the youth training summit.

He was in high school when he began working as a sports official, working youth games at Hallie Q. Brown Center in St. Paul. Within a few years of graduating from high school, Jimmy was officiating basketball and football games in the Twin Cities and around the state. Focusing on basketball, he began working college games and in 1971 became the first African-American to officiate the MSHSL boys state tournament. He went on to officiate at six other boys state tournaments, and since 1971 every state tournament has included African-American officials. 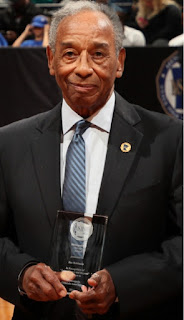 In 1971 he also was selected as a Big Ten basketball official, becoming one of the first African-Americans to work Division I games. His officiating career was derailed by a knee injury after 16 years in the Big Ten but he continued to contribute as an evaluator of officials for the conference.

For nearly 30 years Robinson contributed mightily to high school basketball in Minnesota, working as the MSHSL’s coordinator and supervisor of officials. In addition, he served on the MSHSL board of directors and was inducted into the MSHSL Hall of Fame in 1993 as well as the Minnesota High School Basketball Coaches Hall of Fame. He received the NCAA’s Living Legacy Award during the Final Four in Minneapolis in 2019.

Carl Britt, a retired official now living in Las Vegas, joined other veteran Minnesota officials on a Zoom call after learning of Robinson’s death. “I got very teary-eyed,” he said.

“To talk about Jimmy is like talking about not just a mentor but a dad,” Britt said. “Jimmy expected all of us to act in a way that you would be respected in the community. He told me, ‘You never know who sees you. Once you get out, you may not know people in a restaurant but I guarantee you people will know you and how you carry yourself.’ ”

Jimmy understood that officiating meant more than what happens during games. He was a stickler for not only rules but also mechanics, and stressed those things when he met with officials, whether it was at a clinic or after a game.

M.J. Wagenson of Pine Island, who in 2016 became the first female official at the boys state basketball tournament, talked about how Robinson and Dewey Mettler of Mankato, a now-retired officiating coordinator, worked with officials.

“Dewey and Jimmy, their word was gospel,” she said. “If they told you to stand on the X, you stood on the X. They were the epitome of rules and mechanics, they were the guys.”

Wagenson also talked about the postgame meetings with Robinson after state tournament games.

“Officials would wait for each other after games and the first thing they said was, ‘What did Jimmy say?’ We wanted the best for each other, and Jimmy was the guy who came in with the notebook and sat down. He wanted to know your opinion first, then he gave his opinion and it was a learning experience. It might not have been the most comfortable situation every time but you always learned and got better from it.”

Steve Makowske of Brooklyn Center, who worked closely with Robinson for the last several years and succeeds him as the state basketball officiating coordinator, recalled meeting Jimmy more than three decades ago when Makowske was a new official.

“He was sitting at a game and he came in afterwards, wanted to know who I was, what association I was with, and I gave him all that information. One of the veteran guys said, ‘That’s Jim Robinson, he’s the state coordinator.’

“Probably 10 or 12 years ago he said to me, ‘You and I are pretty much on the same page and I’ll need to be replaced at some point.’ ”

Makowske and Robinson began watching games together and Robinson attended an officiating clinic that Makowske set up. “He said the clinic was very impressive and he took me under his wing. He told (now-retired MSHSL associate director) Kevin Merkle that he wanted me to replace him. Kevin said to me, ‘Jimmy has talked to me and I concur. We’d like you to be the next state coordinator.’ So over last eight or nine years I’ve been doing pretty much everything with Jim.”

MSHSL associate director Lisa Lissimore, like Robinson a native of St. Paul, knew him well for decades. Lissimore is the director in charge of girls basketball and the girls state tournament.

“Jim’s legacy of service and leadership will be greatly missed by the Minnesota State High School League and the basketball officiating community,” she said.  “Jim has mentored, trained, and evaluated officials from every corner of the state. He leaves behind a trail of excellence that invites us all to follow.”

Jason Nickleby, the MSHSL coordinator of officials, began officiating when he was in high school and now works as a Big Ten football official. He knew Robinson from a young age and said his legacy will be carried forward.

“In the last two or three years I think he reached a sense of peace and calm about where the officiating program is from a basketball perspective,” Nickleby said. “I think he had shared his wisdom and philosophy with people that could carry it forward and he knew it was in a good place. Steve’s charge and my charge and our regional coordinators’ charge is to carry that vision forward.”

--A patch honoring Robinson is being developed for basketball officials to wear during games.

--To honor Jim Robinson, the MSHSL is collecting notes of thanks to him, which will be forwarded to his family. Anyone wishing to contribute can send an email to officials@mshsl.org 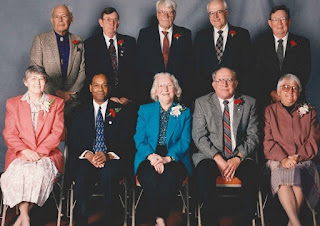 "Jimmy was the guy who came in with the notebook and sat down. He wanted to know your opinion first, then he gave his opinion and it was a learning experience. It might not have been the most comfortable situation every time but you always learned and got better from it.”
Basketball official M.J. Wagenson