In past years, the girls and boys cross-country teams from St. Cloud Cathedral have competed in large meets. They have included the Milaca Mega Meet, which attracts 150 teams and nearly 6,000 runners, and the Roy Griak Invitational in the Twin Cities, which brings together many of the top high school and collegiate runners from around the nation.

One thing the Crusaders had not done for two decades was host their own meet.

This year, as we all know, is not like past years. Under Covid-19 restrictions, only three teams can be on the course at the same time. Most conferences have limited their cross-country teams to competing only against other conference members.

Covid-19 has certainly brought changes to the other fall sports currently being played in Minnesota; soccer, girls tennis and girls swimming and diving. But cross-country is running on ground that has shifted more than in the other sports.

One of the biggest extra details took place Monday when Cathedral hosted fellow Granite Ridge Conference members Milaca and Zimmerman on a beautiful day at Wapicada Country Club. There were races for junior high, junior varsity and varsity teams.

In the boys varsity race, Cathedral’s Alex Heen, Turner Schad, and Henry Ebel finished first, second and third as the Crusaders were the winning team. Zimmerman won the girls varsity event with a one-point margin over Cathedral. Zimmerman’s Hailee Zimpel and Peyton Opsahl finished first and second with Brittany Hansen of Milaca third.

Three teams of eight varsity runners lined up and took off when Jamison fired a starter’s pistol. Jamison, who previously coached at St. Cloud Tech and hosted meets for years, and Stark-Haws were busy Monday setting up the course and helping things go smoothly.

“I was the starter, the timer, the coach,” Jamison said with a smile. “No hiccups.”

Approximately 20 years ago, Cathedral hosted the annual West Central Conference cross-country meet on the grounds of the Veterans Administration hospital in St. Cloud. That meet rotated among conference schools, and when Cathedral’s next turn came up 12 years ago, construction on the hospital property made racing impossible. 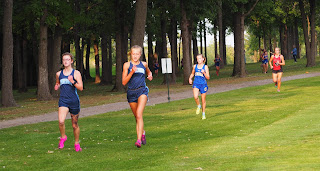 When Cathedral joined the Granite Ridge Conference a decade ago the Crusaders didn’t have a home cross-country course, and ever since they have done all their running on the road. Until Monday.

“With Covid this year, we needed many more meets and courses within our conference with triangulars,” said Cathedral activities director Emmett Keenan. “So we agreed to host and Wapicada (where the Crusaders play golf and run an annual fundraiser) allowed us to host there. Wapicada had been the site of a meet for St. Cloud State for several years up until a few years ago.”

None of the runners competing Monday had seen the course prior to arriving. But that didn’t dampen the enthusiasm or the competition.

“It was a really good day,” Jamison said. “Weather-wise, it couldn’t have been nicer. And just being able to host, it felt huge. It was a great thing that hopefully we can make an annual invitational. For myself and Eli, this is something we love to do.”

Stark-Haws said, “It went by so quickly. All this buildup and planning, and it was over in the snap of a finger. It’s just really important to have that home meet pride.”

“It went by so quickly. All this buildup and planning, and it was over in the snap of a finger. It’s just really important to have that home meet pride.”
Eli Stark-Haws