Trio Of State-Champion Sprinters Is Hard To Stop

During a close game against Stillwater last week, the Edina High School girls soccer team leaned on its speed to overcome an early deficit.

The Ponies had scored on a goal by Luka Johnson early in the opening half. Ten minutes later, Hornets senior Maddie Dahlien sprinted down the left sideline with the ball. She raced past a couple of defenders, took a quick right turn and centered to senior Ellen Norman for the tying goal. The Hornets went on to win the game 2-1, with the tie-breaking goal scored in the second half by senior Wesley MacMiller on an assist by Dahlien.

Dahlien, as track and field fans know, is a star in that sport. She swept big-school state titles at 100, 200 and 400 meters at last spring’s state meet. She is not the only speed merchant on the Edina soccer team; MacMiller and sophomore Izzy Engle were members of the Hornets’ state-championship 4x400-meter relay team, along with Skyler Kiefer and Emma Hudson. 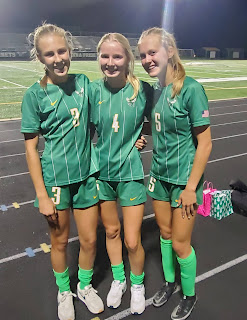 “When you get a long ball and you see that girl coming up next to you, it's kind of like track,” Dahlien said. “You just want to get the edge over her and beat her to the ball.” (Pictured, left to right, are Engle, MacMiller and Dahlien.)

All three say they prefer soccer over track, because of the team aspect and the fact that they have been playing soccer longer than they have been track athletes. But they also know that training as sprinters gives them an edge on the pitch.

“The meets themselves are really short races but the workouts really help build our endurance,” Engle said after the Stillwater game. “Most of us played at least three quarters of the game tonight, and we were still fine to keep going for another 10 or 20 minutes.”

The Hornets are the top-ranked team in Class 2A girls soccer and will take a 5-0 record into a Tuesday night game Minnetonka. Dahlien leads the team with six goals (she had three Saturday in a 5-1 win at St. Michael-Albertville), Engle has five and each has recorded four assists. MacMiller has two goals and one assist.

“It's definitely a huge benefit on the soccer field to have the speed that they do, and all three of them have breakaway speed,” said Edina coach Katie Aafedt. “They're fast, all three of them are extremely quick, and they all have long-range speed. It's tough to defend because it's exhausting to chase all three of them.”

The Edina girls soccer team has had plenty of two-sport athletes in past years, many of them also playing hockey. Aafedt is always happy to welcome multi-sport kids.

The trio of state track champions say they enjoy the creativity and strategy of soccer as opposed to the simple, raw speed of track and field.

“You can be more creative and it's an 80-minute game instead of a one-minute run or whatever,” said Engle.

MacMiller added, “Track is also a team sport, but in soccer your team does everything together and you get super close during the season. It's just a really fun environment.” 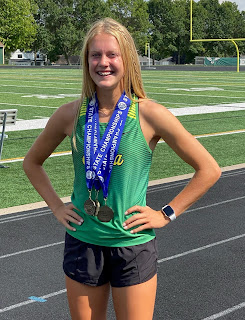 Dahlien (pictured) will play college soccer at North Carolina, which has won 22 NCAA championships. She also has heard from the Tar Heels’ track and field coaching staff, which is interested in having her join their team, as well. She said she’s considering her options.

“I haven't made a decision but my parents have really been pushing me to obviously put school first,” she said.

Edina has qualified for the girls state soccer tournament 11 times, winning a title in 1986 and finishing as state runner-up in 2000 and 2007. This fall, the Hornets are hoping to get to state for the first time since 2017.

“I feel like everything's going right,” said Engle. “We obviously have things to work on, but I think if we just keep our momentum going, we're a really good team.”

MacMiller added, “I think our team chemistry is very, very high this year and it's a super fun environment to be around. Practices and games are so fun but they're also super competitive, which I think pushes us to be better.”