John’s Journal: Sports Are Returning And Officials Are Ready

‘This Is A Great Thing. Kids Get To Play And We Get To Officiate”

Greg Ewing has been a high school wrestling official for 30 years and has worked at nine state tournaments. His “normal” job is principal at Red Rock Central in Lamberton, but describing anything as “normal” under the shadow of Covid-19 can seem like a stretch.

However, with winter sports practices allowed to begin Monday and competitions cleared beginning Jan. 14, Ewing is one of hundreds of MSHSL officials who are anxious to get back to work … even if it will not be quite normal.

“Everything will be based on the safety of the kids,” Ewing said. “I am definitely going to be wearing a mask and I’ll have an electronic whistle in my hand.”

Officials in all winter sports will wear masks, and electronic whistles are on option for those choosing to use them. Coaches and sideline workers also will wear masks in all sports, as will athletes in basketball and hockey; those decisions have been made by the Minnesota Department of Health, which is expected to announce how many spectators will be allowed before games resume. 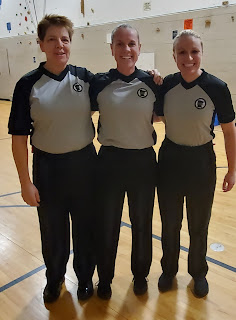 For officials, simply returning to the sports they love is a major relief as 2021 begins.

“It’s a very different year. With everything else being shut down, I feel like life is just very different,” said Becky Blissenbach, an MSHSL regional coordinator for dance officials who has been officiating for 16 years. She teaches math at St. Cloud Tech, which means she has been teaching from home, with her husband also working from home and their children doing schooling from home.

“It’ll be fun to get back out and see what’s out there, and kind of wrap our head around what this is supposed to look like,” she said.

Dance and the other indoor winter sports – girls and boys hockey, girls and boys basketball, wrestling, gymnastics, boys swimming and diving – will indeed look different.  The outdoor winter sports, Alpine and Nordic skiing, will face fewer challenges but everyone involved will be required to wear masks. Locker rooms for teams and officials are not recommended, and practice and competition areas and equipment must be sanitized. No scrimmages, jamborees or tournaments will be allowed; sports like wrestling, gymnastics, dance and skiing can have no more than three teams competing together at the same time.

Some officials have chosen to sit out the winter season for reasons that include fear of Covid-19 and required use of masks. In the Gopher State Officials association, whose approximately 225 members officiate basketball, baseball, softball and football, around 50 officials are planning to sit out the basketball season. And 10 to 15 percent of the members of the Minneapolis Hockey Officials Association also are opting out this season.

“Some of these officials are in their mid-60s and they don’t want to wear a mask,” said Mike Elam, president of the Minneapolis Hockey Officials Association. 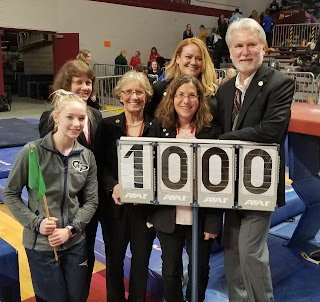 Tim Litfin, a veteran official who has worked baseball, football and basketball for decades and is a member of Gopher State’s board of directors, said when he hears complaints about masks, “Wake up and smell the coffee, this is a great thing. Kids get to play and we get to officiate.”

“I look forward to getting back on the court but I certainly want the kids to be safe and protected,” Litfin said. “I tell other officials the glass is half full. If they’re on the fence, I ask them to give it a try.”

Jenni Smith, who was a high school gymnast and became an official in her first year of college, has been an MSHSL official for 18 years and has worked at 11 state tournaments. She said she expects the 2021 season to be “close to normal, and I’m definitely using air quotes with ‘normal’ right now. … everybody (not competing) needs to wear a mask. But I’m pretty grateful that the gymnast does not have to wear a mask when performing or competing. We want to see them smile; that’s part of judging, the artistry in gymnastics.”

“We really just need to be flexible and stay positive. I’m thankful that sports are moving forward. I officiate for the gymnasts, I want them to have the best experience possible.”

Multi-sport officials have gone through strange times, beginning with the sudden shutdown of the state basketball tournaments in March. No spring sports were held and fall sports experienced a shortened season with no state tournaments. Litfin, for example, would work 35 baseball games in a typical spring and 40 to 50 basketball games each winter. He worked 11 football games in the fall and had three others called off due to Covid-19.

“This is my lifeblood, and when we got to (start football) I was one of the happiest refs around,” he said. 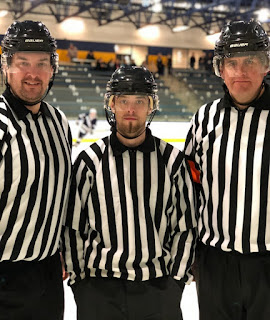 Officials are being instructed to have no physical contact with coaches or players, meaning no pregame or postgame handshakes or fist bumps. That will be more of a challenge in a sport like wrestling, where officials won’t raise the hand of the winner after each match. And it goes beyond that.

“The hardest thing for us will be no touching the kids in any way,” Ewing said. “Sometimes a simple hand on a shoulder can stop something that could be potentially dangerous. We’ll have to be very vocal as officials.”

As for masks, Ewing said, “You hear other states are doing it and you see examples that it’s working. I say let’s give it a try.

“We’re looking forward to being ready to give the kids the best experience when we get back. That’s ultimately what this is all about, the kids.”

“Wake up and smell the coffee, this is a great thing. Kids get to play and we get to officiate. I look forward to getting back on the court but I certainly want the kids to be safe and protected.”
Tim Litfin