John’s Journal: Tennis in the Age of Covid

“We're all grateful that we can be here” 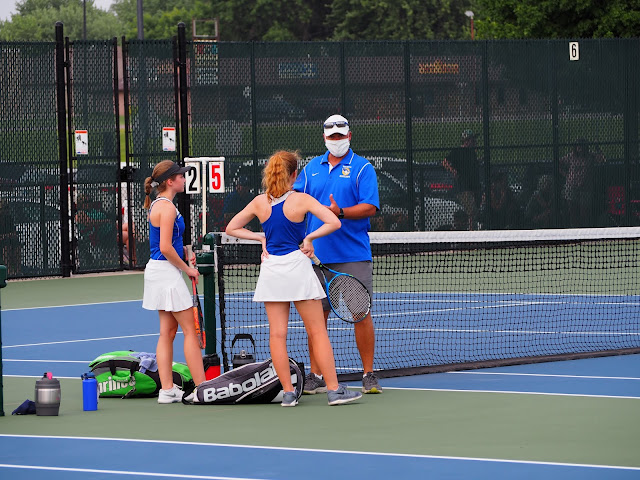 The game is the same but things are different for girls high school tennis in Minnesota this season. There is lots of hand sanitizer, masks are worn when players are not competing, and there are no high fives or tightly-bunched team huddles. When players change sides of the court, there are no benches or chairs to sit on during the break; they would have to be sanitized after each use due to concerns and guidelines regarding Covid-19.

Those are some of my observations from two days of watching tennis this week. I went to Waseca on Monday to see the Bluejays host the St. Peter Saints, and on Tuesday I drove to St. Cloud, where the Tech Tigers met the Brainerd Warriors. Waseca High School and St. Cloud Tech are 134 miles apart, one in the Big South Conference and one in the Central Lakes Conference.

At Waseca, no fans were allowed inside the fence that surrounds the eight tennis courts. There are several small sets of bleachers in the middle of the courts, but they were turned upside down. Fans sat on lawn chairs and watched the girls play while looking through the fence, the view made difficult by dark wind slats in the fence.

The complex at St. Cloud Tech is somewhat roomier; a wide center area with four courts on each side allowed spectators an unobstructed view. Fence posts along the chain link fence were each marked with blue plastic tape. The posts are seven feet apart and fans were asked to stand no closer to each other. Most people wore masks.

“It's like a totally different textbook,” said Waseca coach Kyle Collins, who has been coaching tennis for 23 years. “There are new methods and you rethink how you're going to do things. That's probably been the biggest adjustment.” 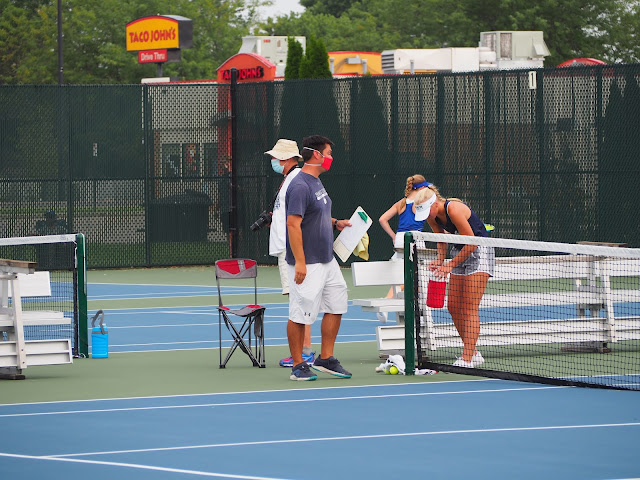 On bus rides, each passenger gets their own seat and everybody wears a mask. In fact, from the time players and coaches board the bus, everything is different until they hit the courts. They squirt sanitizer into their hands, they high five with their rackets, they congratulate their opponents verbally instead of shaking hands.

“It's hard because you can't be with your team as much and you can't bond as much, but I feel like we've also bonded just because we're all working through this together,” said Waseca senior Tanika Johnson. “And we're all grateful that we can be here.”

Players have lost track of how many times they’ve put a hand up for an enthusiastic high five but quickly pulled it down. Racket taps are a fine substitute.

St. Peter coach Aaron Rothenberger, who has coached there since 2007, said the lack of those normal physical interactions has been challenging.

“I've seen a lot of things as a player and I've seen a lot of things as a coach,” he said. “I've never seen anything like this, where you have to be so very careful of interaction. I'm a guy who shows good sportsmanship and appreciation to my opponent and I teach that to my players. And so what's bizarre and weird for me is not seeing handshakes, not seeing high fives, the typical positive reaction. I think that's what I really miss the most.

“But again, the positive light is that we’re playing. We don't know how long we're going to play, but we're going to make the most of it. I think the girls are going to probably value this way more than a normal year.”

There were worries about the tennis season happening at all, followed by relief and excitement when the MSHSL board of directors gave the go-ahead on Aug 4. Cross-country, soccer and girls swimming and diving seasons are also underway, while football and volleyball were moved to a new “flex” season next year between winter and spring sports. 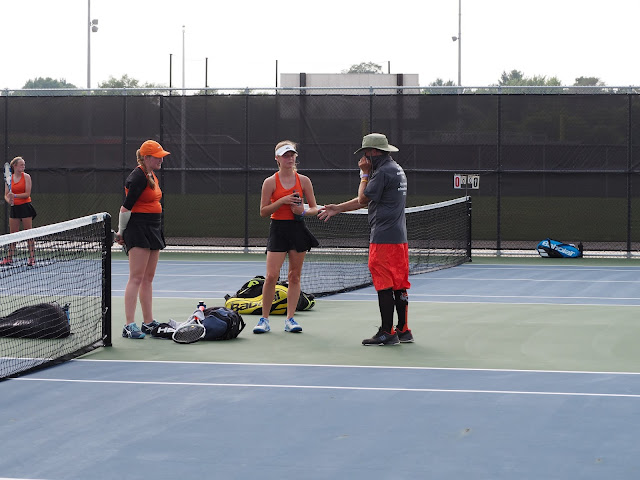 "I was honestly surprised with everything. especially hearing that football was going to be moved,” said Brainerd senior Kate Kurtzman. “But I was really excited too, just because we're outside and we can still distance ourselves.”

Kate Chaussep, another Brainerd senior, said, “We’ve been just rolling with it. Every time in practice, the first thing we do is go grab some hand sanitizer. We try to stay six feet away at all times whenever possible, and if we can't we have our masks on. We’ve been getting used to it.”

The first two competition days of the tennis season were hot and humid. Players bring their own water bottles, which is the norm for tennis. That’s one of the few things that isn’t new in this age of Covid-19.

“The girls are grateful,” said Brainerd coach Lisa Salo. “I think about our seniors; we have just great senior leadership, and they get to have a season. We hope we can go all nine weeks. And you know what? Each day is a gift.

“Everybody was just excited to be back together. Gratitude is probably the best word to use.”