With A 5-Foot-3 Quarterback, They Pull An Upset Out Of Their Hat 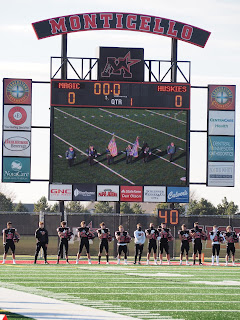 MONTICELLO -- The prototypical quarterback fits a certain mold. He’s tall and rangy, he can easily see over his linemen and he can throw frozen ropes downfield. Calvin Schmitz is not the prototype.

The Monticello High School senior is the Magic’s emergency quarterback this season. Anthony Staryszak, a 6-foot-1, 195-pound junior, broke his throwing hand when it smacked against a helmet on his very first pass of the season. Anthony finished that Week 1 game, a 34-14 win over Sauk Rapids-Rice, and somehow completed 13 of 19 passes for 188 yards and two touchdowns.

When Staryszak’s injury was diagnosed the next day and his hand was put in a cast, he was lost for the season. There was no clear-cut next man up, said coach Jason Telecky. Junior wide receiver Wyatt Sawatzke took a turn before the decision was made to give Schmitz the job, and the responsibility.

Calvin is listed on the roster as 5-foot-5 and 185 pounds. After Monticello defeated Owatonna 7-6 on Friday, he just laughed when those figures were mentioned and said, “I'm 5-3, 200 pounds and I never played quarterback before this year.”

He’s an athlete, there’s no doubt. He’s a catcher on the baseball team and will play that sport at Northern State University, an NCAA Division II school in Aberdeen, South Dakota.

“It's Calvin’s senior year, and he just has the drive, the will, the determination,” said Telecky.

The unranked Magic have a 3-1 record and Friday’s win over Owatonna was huge. The Huskies came in with a 3-0 record as the second-ranked team in Class 5A. The outcome wasn’t decided until the final play of the game, when a low snap foiled an Owatonna field-goal attempt.

Calvin completed five of 10 passes for 24 yards, ran 16 times for 17 yards, was all over the field at linebacker, and returned punts and kickoffs. He intercepted a pass late in the third quarter to stop a Huskies drive; after getting on his feet, he held the ball in his left arm and flexed his right arm on the Monticello sideline.

Schmitz had played a little quarterback in summer passing leagues, “And I actually did a decent job, so from there on out we just decided I was the backup. But never did we think it would actually be me at quarterback.”

“He might be the shortest quarterback in in the state of Minnesota right now,” said Telecky, smiling. “We don't have tremendous depth, that's always our concern, and losing Wyatt was hard, really hard on these guys. We're knew we going to be OK but you’ve got to convince them of that, and then Cal stepped in and played really well.”

Senior running back Sam Valor (pictured here, left, with Schmitz), who carried 17 times for 93 yards and a 15-yard touchdown against Owatonna – giving him 471 rushing yards in four games – said

“Definitely in our playing careers this is the biggest game, biggest upset that we've had.”

The Magic are scheduled to play at Elk River on Thursday and finish the six-game regular season at home against St. Francis on Nov. 11.

“We had a great week of practice this week and we reminded these guys, ‘You're good football players, we're going to get tired, we're going to be sore but we can do this,’ ” Telecky said. “I just think for them to have that belief in themselves, that's all you can ask as a coach.”

“He might be the shortest quarterback in in the state of Minnesota right now. We don't have tremendous depth, that's always our concern, and losing Wyatt was hard, really hard on these guys. We're knew we going to be OK but you’ve got to convince them of that, and then Cal stepped in and played really well.”
Monticello coach Jason Telecky