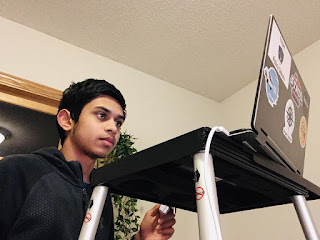 Arush Iyer joined the debate team at Eagan High School as a ninth-grader, using it as a way to overcome nervousness and an occasional stutter when talking in front of people. Now a senior headed to Northwestern University to study economics, he has become one of Minnesota’s top debaters in the Lincoln-Douglas category, but one thing is very different as the 2021 MSHSL state debate tournament approaches: Nobody talks with other people in the room.

The Covid-19 pandemic has not stopped debate, although the activity has moved to virtual platforms with competitors and judges all sitting in front of computer screens instead of the same room. MSHSL state debate tournaments have been held since 1902, and the 2021 version will take place later this week.

“It’s the oldest and longest-running championship in state history,” said Eagan debate coach Chris McDonald, past president of the Minnesota Debate Teachers Association and a member of the National Speech & Debate Association Hall of Fame. “I’ll be damned if it was going to end due to a pandemic.”

If there were no pandemic, the state tournament would be held at its traditional home: inside Blegen Hall at the University of Minnesota. The event will go on as usual Friday and Saturday, Jan. 15-16, but with everyone gathering, competing and judging virtually.

(In the photo above, Eagan sophomore Archan Sen debates in front of his home computer.)

MSHSL debate teams have no limitations on when their season can begin and end or on how many times they can compete. Some of the top teams travel around the nation for weekend competitions. But not this year.

“The thing I’m proudest of is we did not bat an eye last spring when we were met with this challenge,” McDonald said. “We all said, ‘How do we solve this so our kids can do their activity?’ My position all along was we cannot have in-person tournaments, and we could jump up and down and threaten to sue the League, but what good would that do?”

McDonald, along with current MDTA president Cort Sylvester of Rosemount High School, D.J. Brynteson of Armstrong/Cooper and others, helped devise systems for online competitions in Minnesota. Glitches, such as weak connections and poor sound quality, can happen, but everyone pitches in to make practices and competitions possible.

Eagan senior Claudia Liversee, who partners with sophomore Aerin Engelstad on a Policy debate team, said being unable to meet with Aerin in person is another obstacle to overcome.

“Normally we would be sharing files and talking between rounds,” Claudia said. “It’s harder to work together when everything is digital, we have to do more prep ahead of time. We talk almost every day about preparation.”

In-person debate tournaments are normally held in a school setting, with different categories and rounds assigned to specific classrooms. The online format is similar, with clickable links created for each “room” … as contestants, judges and others connect online. 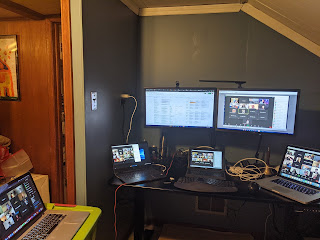 “We created a system where we lay links into tab rooms, instead of putting in room numbers, and you put in a link to each individual room,” McDonald said. “Over time we’ve refined all the different processes we’ve created to make that work, and it’s worked every single weekend since September.”

Since the pandemic began, Eagan’s top Policy team has taken part in 77 competitive rounds at a dozen or more tournaments. As McDonald explained, “We’ve competed in New York without going to New York, and in Texas without going to Texas.”

Not traveling has certainly cut costs, but enjoying down time with teammates and kids from other teams has all but disappeared under the current conditions.

“They’ll tell you they flat-out miss the social aspect of it,” McDonald said. “They’ll go online together and play games until midnight sometimes after a tournament. But they miss being together. They’re just so pleased they get to do something on the weekends that they enjoy.”

Iyes said competing from home, “definitely is a little bit surreal. Usually in a debate tournament you don’t expect your little brother to throw a football at you in the middle of a round. I do miss being able to hang out with my friends at tournaments. But I do like it in some ways; during rounds can I go to my bedroom and take a nap and have home-cooked food.”

Yes, it’s different. But the students are able to take part in an activity they enjoy, and that’s what matters the most.

As McDonald said, “We’ve brought some sense of normalcy to an activity that’s competitive and provides an avenue to a state championship.”

“The thing I’m proudest of is we did not bat an eye last spring when we were met with this challenge. We all said, ‘How do we solve this so our kids can do their activity?’ My position all along was we cannot have in-person tournaments, and we could jump up and down and threaten to sue the League, but what good would that do?”