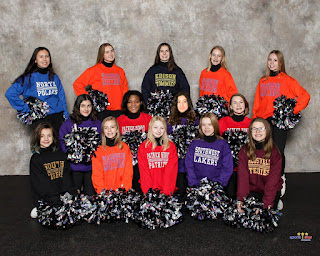 High school hockey in the Minneapolis Public Schools system is unique. There is one boys program and one girls program, with players from all seven city high schools eligible to participate for the teams known simply as Minneapolis Hockey. Home games are played at Parade Ice Garden, and the atmosphere there also is quite unique since the district isn’t allowing spectators for any activities this winter due to Covid-19 concerns.

And yet, loud cheers are heard during games at Parade. There are no fans, but there are cheerleaders who are more than cheerleaders. Like the hockey players, cheerleaders can be students at any of the seven Minneapolis high schools: Edison, North, Patrick Henry, Roosevelt, South, Southwest and Washburn. The program was founded three years ago and last year it became a varsity activity.

The Minneapolis Hockey cheerleaders are also competitive figure skaters. Prior to this season they skated during intermissions but because of Covid they are confined to the stands, wearing masks, but that doesn’t diminish their energy or excitement.

“It’s been interesting to see them transition from being the star of the show to being confined to the bleachers,” said Anne Cross, a hockey and cheerleading parent who came to the school district with the idea of hockey cheerleaders and coaches the group. “They’ve really taken to it, they see the value of being involved in someone else’s sport, being an advocate. And getting out of the house is a major draw.” 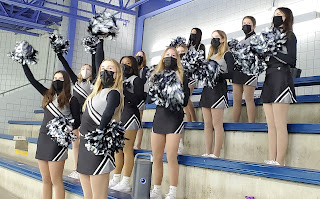 The cheerleaders, all of whom are competitive figure skaters with USA Figure Skating, were busy Thursday evening at Parade as the Minneapolis boys team defeated Bloomington Kennedy 9-1. They are well-versed at this point in the season, yelling in unison “G-O-A-L! Goal! Goal! Goal” after the team scored, along with “M-P-L-S! Go Minneapolis!” and the lengthier “M-I-N-N-E-A-P-O-L-I-S! Minneapolis!”

Roosevelt ninth-grader Lydia Martin said her love of skating first drew her to the team, along with family tradition. Her mother was a cheerleader at Southwest and her father was the Husky mascot for St. Cloud State hockey games. Lydia said she also enjoys being part of a district-wide activity.

“It’s a sense of community. We are all from different parts of this big city, different schools, different friends, yet we come together to make one team.”

The cheerleaders do more than cheer at games. They also have built a social media following with YouTube “Hockey Talk” videos focusing on game results, their own skating prowess and lots of entertainment (videos can found by searching Minneapolis Hockey Cheerleading on YouTube, and information on other social media platforms can be found at @612RINK).

“I’m impressed by all of the social media wizardry that the hockey cheerleaders have done this season,” said boys hockey player Zander Zoia, a junior at Southwest. “It’s been nice hearing them cheer at our home games in the empty arena. I appreciate all the time they’ve spent at our games and creating their posts when I know they could be doing other things.” 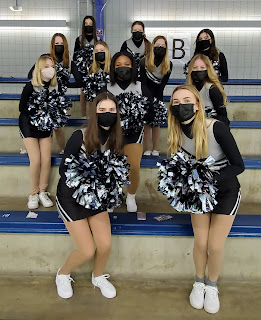 “This is totally the brainchild of Anne,” he said. “She approached us and got it going. She’s a real special person.”

When Cross approached the district two years ago, her son Robert was playing hockey (he’s now in college at UCLA) and her daughter Shannon was involved in figure skating. Robert is a Southwest graduate and Shannon is a junior at Washburn.

“We really believe in the schools and wanted to give back,” Cross said. “I thought for an exhibition it might be fun to have cheerleaders, let them learn a little more about hockey, perform, root for their siblings and friends. I asked around and everybody was really supportive. We had two quick practices, came up with some fun little things, skated to Crazy Train, and it was a huge hit.”

The 14 current cheerleaders don’t seem to mind being confined to the bleachers during games. Instead of focusing on preparation for skating between periods and then winding down afterwards, they now have more time to interact with their friends from other schools.

“There are a tremendous amount of positives in performing in the bleachers compared to performing on the ice,” said Leah Smith, a senior at Washburn and a team captain. “This season, with Covid, has allowed our team to grow in ways we didn’t think was possible. There is a renewed sense of teamwork and a new meaning of what a team is. In the bleachers we now interact and talk with each other so much more than when we were solely an on-ice performing group. We’ve all grown closer to each other, and there are so many more opportunities to build up future leaders.

“We have become a lot more spontaneous, and we’ve definitely learned how to live in the moment. I think we now have a better understanding for the game itself. And there’s definitely more emphasis on making each performance count and noticeable because we’re not the center of attention compared to taking the ice for a few minutes at a time.”

Holding cheerleading practices can be an obstacle because they attend different schools in different parts of the city, but the group sometimes gathers via Zoom. Most of the cheerleaders train as figure skaters five or six days a week.

“The figure skating community has been really responsive to and happy about these girls being involved in hockey,” Cross said. “It’s fun to connect two worlds that probably should have been connected.”

Aislyn Brogdon, a junior at Patrick Henry, said being a hockey cheerleader is a fun way to be involved in school and the community.

“I would never have talked to half the girls on the team because I don’t go to the same school as them,” she said.

Smith called the cheerleading team “a leading example for unifying our city and our school communities.”

“I think our diverse representation of the seven schools will help to inspire other city-wide sports and movements to strive for inclusion,” she added. “To me this symbol of representing all seven schools is very powerful, and it inspires and pushes me to grow and expand not only my social circle but also my understanding of what a team can be.”

--Pictured at the top of this story are team members, schools and grades:

“It’s been interesting to see them transition from being the star of the show to being confined to the bleachers. They’ve really taken to it, they see the value of being involved in someone else’s sport, being an advocate. And getting out of the house is a major draw.”
Anne Cross