John’s Journal: Timing is Everything for Josh Gerber

Josh Gerber likes to stay busy and he doesn’t mind long days and hard work. As the founder and owner of Wayzaya Results, a company that provides timing services for track and field, cross-country, Nordic skiing and similar competitions, Gerber is used to the grind.

His first cross-country event this fall was held Aug. 22. Due to Covid-19 concerns, only three teams were allowed to run at one time, meaning wave after wave of three-team clusters (varsity and junior varsity) had to be prepared and timed. It ended up being a 12-hour day for Gerber. And he loved it.

“I was a little rusty,” said Gerber, 33. “It’s been kind of weird, a weird range of emotions. But it’s nice to get back out there.”

Gerber is among the countless numbers of sometimes unseen people who make high school activities possible. Whether they are officials, ticket-takers, custodians, scorekeepers, timers, etc., they work – often as volunteers -- to ensure kids can participate.

Gerber, who was a track and cross-country athlete at Wayzata High School and Luther College in Iowa, was in junior high when he became interested in the process of compiling results. After running in a meet, he noticed a scoring error. Before long he was exploring software and doing his own scoring and timing.

As a student at Luther he was hired to time high school meets for the Three Rivers Conference and Hiawatha Valley League in southeast Minnesota. From there, his business has grown into a well-known name in the Midwest. Wayzata Results has worked events at the University of Minnesota since 2013, along with the University of Iowa, Northern Iowa and many Division II and III schools and conferences, along with the MSHSL state cross-country championships since 2013 and state track meet since 2014.

With half a dozen contract employees, Wayzata Results can work five or six events in different locations on the same day.

Last spring was slow with the cancellation of Minnesota high school track and field and the college outdoor track season. This fall’s high school cross-country season is different, with no big meets and staggered starts. In a normal autumn, Gerber’s company would work most every Tuesday, Thursday and Saturday; this year most of its meets are on Thursdays.

“When the NCAA cancelled everything (last spring), that hurt,” he said. “We were supposed to do some pretty big championships last year. It was the right decision, so it hurt less, but it still hurt because some expenses have to be paid anyway.”

But wait, there’s more: Gerber is also a veteran MSHSL soccer official who has returned to that job. He’s back on the soccer field this fall, glad to be back for the first time since working last year’s state tournament at U.S. Bank Stadium. 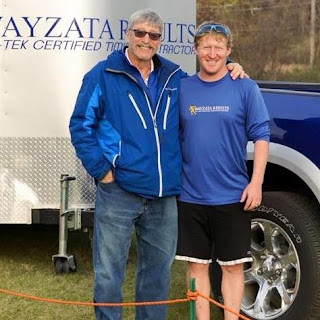 “For soccer, it's taken a back seat to my timing schedule since I've been getting busier,” he said. “I usually referee college and high school soccer during the fall, but since all college seasons are cancelled I'm doing roughly 19 or 20 games this year.”

Being an official is part of the family for Gerber, who lives in Chaska with his wife Katie and son Brady. His father, Steve Gerber, is a longtime track and cross-country official who also works as the public-address announcer at the MSHSL state cross-country meet. (Steve and Josh are pictured.)

"I'm lucky to have a very supportive family that allows me to do multiple sports in a season,” said Josh.

“I was a little rusty. It’s been kind of weird, a weird range of emotions. But it’s nice to get back out there.”
Josh Gerber