John’s Journal: Title Dreams Appear Dashed, But They Run On 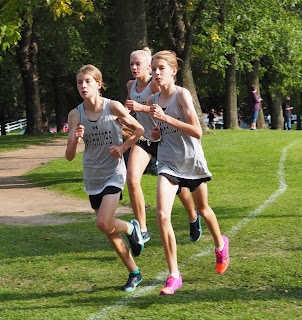 SLAYTON -- If there is one individual athlete and one team that would seemingly have every right to feel as if they are being treated especially unfairly by the Covid-19 pandemic, it is Murray County Central/Fulda senior Morgan Gehl and her cross-country teammates.

Last year, in her fifth appearance at the Class A state championship meet, Gehl won her first state title and the Warriors placed fourth in the team standings. Morgan is now a senior and every other runner is back this fall, with every intention of winning a team state title.

But the virus has thrown everything into chaos, and at this point the odds of holding a traditional state championship meet appear to be slim because gathering several hundred runners and thousands of spectators is unworkable under Covid-19 restrictions.

“It’s pretty deflating for our team if it doesn’t happen,” said Warriors coach Dominick Damm. “We had the fourth-place girls team and nobody graduated and my girls ran thousands of miles this summer.”

The 2020 regular season also is drastically different. Murray County Central/Fulda is a member of the Red Rock Conference, which like many conferences has limited competitions to triangulars involving conference members (Covid restrictions allow no more than three teams on a cross-country course at one time). The Red Rock consists of 11 small schools, and with cooperative agreements there are only five cross-country teams in the league. So those five teams see a lot of each other.

In a normal season, the Warriors would travel farther to face more teams and larger schools.

“They’re decent teams but we’re not getting the chance to run against Luverne or Canby or even some of the AA schools, like Worthington, Marshall, New Ulm and some of those other schools,” Damm said. “It’s definitely been a struggle to lay stuff out there for them to shoot for.”

The Warriors girls and boys varsity teams both came out on top. Tim Salentiny of Heron Lake-Okabena was the boys champ, followed by Isaiah Kathman of Murray County Central/Fulda and Paul Salentiny of Heron Lake-Okabena. The girls race was a testament to the strength of the Warriors, with sophomore identical twins Amanda and Ashley Overgaauw sharing first place and Gehl third.

It was the second time in three meets this fall that the twins have finished ahead of the defending state champ. Morgan is dealing with a knee issue that “depends on the day. If we do workouts that are stop and go, then it'll start acting up,” she said.

For the Warriors last year at state, Ashley Overgaauw finished 50th, Amanda Overgaauw was 52nd, Brylei Schreier was 93rd, Ella Stepak was 126th, Ryanna Schreier was 141st and Josie Harms was 148th in a field of 176 runners. The team champion was Perham, followed by Luverne, Howard Lake-Waverly-Winstead and Murray County Central/Fulda.

With the coop agreement, some of the Warriors runners attend school at Murray County Central in Slayton and some are students in Fulda; Gehl is from Fulda and the Overgaauw are MCC kids. And here’s another quirk: During the spring track and field season, Fulda and Heron Lake-Okabena form a coop team. So Gehl runs on two different teams in two different seasons.

Gehl was undefeated last fall, culminating with her dominant state championship at St. Olaf College in Northfield. She finished in 17 minutes, 53.5 seconds, with runner-up Jade Rypkema of Nevis clocking in at 18:20.2. In Morgan’s first trip to state as a seventh-grader, she placed 61st, followed in the ensuing years by eighth-, fourth- and third-place finishes.

She will never forget the feeling of winning a state title.

“Oh, it's awesome,” she said. “It's kind of unexplainable. When you're going down that last home stretch, there are so many people there. And then you cross it and you're like, ‘Oh my gosh, I just won.’ ”

She seems accepting of this year’s restrictions while wishing she and her teammates could make a run at a team state crown.

“I'm glad that I got to go there and win a state championship,” she said. “But for our team, it's like, man, I wish we could be there. I'll bet we would have won.”

Gehl, the Overgaauw sisters and the rest of the team worked hard over the summer, putting in mile after mile on picturesque country roads and trails.

“Morgan really motivated us this summer to try to get better, because we ran about 15 miles a day,” said Amanda Overgaauw. “And she's a really great partner to run with every day in practice.”

No matter how this season ends, Gehl is confident that the twins have a bright future.

“Their work ethic is super,” she said. “And they're really super nice, they're great people. And I hope they get to go to state one year and hopefully finish one and two.”

“I'm glad that I got to go there and win a state championship. But for our team, it's like, man, I wish we could be there. I'll bet we would have won.”
Morgan Gehl

Board of Directors approve returning volleyball, football to fall season