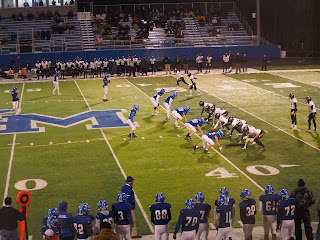 At 5 o’clock Monday afternoon, volleyball official Tristan Severson pushed the button on his electronic whistle and signaled for play to commence. Kasson-Mantorville junior Madelyn Converse, leaping at the serve line, swatted the ball over the net and into the temporary care of the visiting Minneota Vikings.

At 9:29 Tuesday night, four members of the Kasson-Mantorville football team, who were the last to linger on the stadium turf after the final game of the season, walked off the west end zone and into the darkness, heading toward the school. One minute later, the stadium lights went dark.

From that first slap of a volleyball through the moment those boys left the football field, it was a remarkable stretch of time in this autumn of Covid discontent. On Monday word had come out that Governor Tim Walz was preparing to announce new virus-mitigation measures, possibly including shutting down MSHSL sports. By Tuesday afternoon he had made it clear, without specifics, that the news to come on Wednesday would be difficult. “It's going to be a very difficult four weeks,” he said.

Minneota volleyball coach Hayley Fruin (pictured) knows about Covid, having tested positive in August; she called it a “short-lived” illness. In early October she gave birth to her second child and everything went well. 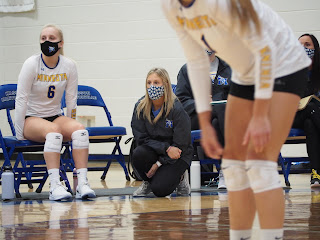 Monday’s volleyball match between the Minneota Vikings and Kasson-Mantorville KoMets was scheduled only two days earlier while both teams – like so many – continually shuffle their plans as opponents drop away due to the virus.

“To be honest, I haven’t scouted a team all year,” said K-M volleyball coach Adam VanOort. “I had no idea who their players were, I didn't know what kind of offense they ran and it didn't matter. We were going to come out and play hard volleyball, that was the goal.”

It’s a drive of more than three hours from Minneota to Kasson; the Vikings carpooled with parents behind the wheel. The KoMets’ football opponent on Tuesday could have arrived via bicycle because Byron High School is only 5.8 miles away.

For the Vikings, the drive to Kasson is longer than their almost annual trip to Xcel Energy Center in St. Paul for the state tournament. But with no state tournaments for fall sports, no high school teams are going to the X for volleyball or U.S. Bank Stadium for football.

That knowledge, coupled with anticipation of the governor’s news, made everything unsettled. But as Minneota volleyball player McKenzie Tolk told me after the unbeaten Vikings defeated the KoMets 3-1, "You just don't know what's going to happen. You don't know if you're going to be going back to school or playing sports. You’ve just got to play like it's the state championship every game." 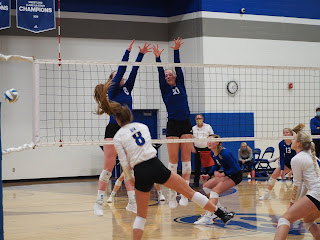 Tuesday’s football game carried a championship flavor because everyone knew this was going to be the end of the road for both teams. Two football teams in Class 4A Section 1 had already been shut down by Covid and two others were already booked to be shut down in the days ahead. Only Kasson-Mantorville and Byron were still standing so the contest was for the section title.

The Byron Bears were finishing a Covid-free season. They played every one of their scheduled opponents and had no players or coaches test positive. That was not the case for the KoMets, who played five football games in a planned six-game regular season.

“On the first day of practice we had a kid test positive for Covid,” said coach Joel Swanson. “The whole varsity team, everybody but our ninth grade, was in quarantine. And then game three, on one of our buses, 11 more guys had to quarantine again because somebody tested positive. Until tonight we've been playing with 25 guys.”

Swanson was talking after the KoMets came away with a 7-0 victory on a frigid night. K-M quarterback Matthew Donovan scored on a 1-yard run in the third quarter, and the rest of the night consisted mainly of defensive stands and the pounding ground game of Byron senior Austin Freerksen, who ran for 174 yards and may finish as the state’s leading rusher with 1,596 yards.

The finish was wild. Byron had the ball at the 50-yard line with 28 seconds remaining and the Bears needed something miraculous. A completed pass moved them to the 32 with 18 seconds left. As the teams lined up, a Kasson-Mantorville coach yelled, “Trips over there! Trips over there!” … making sure the defensive backs knew that Byron had three receivers set wide.

A long, high pass was launched from the strong arm of Bears quarterback Drew Scheuer and it landed in the arms of the KoMets’ Jace Bigelow inside the 10-yard line. K-M got into victory formation for the final snap of the 2020 season, followed by a celebration worthy of a Prep Bowl.

“It's the equivalent (of a state title) for us,” said Donovan.

With the section championship trophy in hand, the KoMets hooped and hollered and hugged and smiled and posed for photos.

On the far end of the field, meanwhile, the Byron Bears were in a tight, quiet huddle around coach Ben Halder. Senior classmates Wyatt Nemeche and Vincente De Leon each wrapped an arm around the other’s back. The huddle broke up as it has all season: “Bears on 3! 1-2-3 Bears!”

As I chatted with Halder, his words perfectly encapsulated what this year – from the sudden halt of winter tournaments in March through current-day concerns about the next shoe to drop -- has been like. When I mentioned the oddity of the first postseason game being for a section title, he said, “It's odd, but 2020 has been nothing but odd. And we're grateful. We've talked about being grateful all year with our kids. And to be happy for what you have and not what you don't have. And our kids have been fantastic with that. We've followed all the protocols and stuff and you can see that; that's why we got to play all of our games. We played every scheduled game, no quarantine, no nothing. 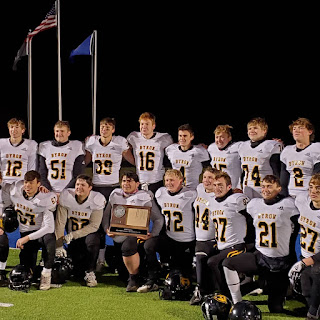 “And that's a credit to our team and our program and our administration and all those people that put forth the effort to make sure that our kids get an opportunity. Because it's about these kids just having an opportunity. The smiles on their faces, the fun they have in practice; I told the kids that it makes my life feel normal out here.

“It's bigger than just sports and football. We're trying to teach our kids that all the time. Athletics don't define you; it's what you do outside athletics that help define you. The winning and losing doesn't define who we are as people. It's how we react and how we take these things and learn from them. I'm proud of our kids and the program. … We're going to ride a bus home together as a team one more time and we got closure as a team. I think that's more important this year than at any time.”

Soon after, two Byron school buses pulled up to the stadium gate, one of them pulling a trailer. In twos and threes and sometimes one at a time, the Bears players yanked off their jerseys and shoulder pads, stacking them in the trailer for the final ride home. The boys were quiet, but smiles were visible inside the buses.

The anticipated news came a day later, shortly after 6 p.m. Wednesday, with the governor addressing the state in a televised address. Emergency Order 20-99, Implementing a Four Week Dial Back on Certain Activities to Slow the Spread of COVID-19, is a lengthy document that includes this: From 11:59 Nov. 20 through 11:59 p.m. Dec. 18, all indoor and outdoor MSHSL sports are halted "including practices, group workouts, games, and tournaments."

Walz mentioned students and athletes when he said, “Much has been asked of you. And we need to ask a little more. … We’re at a dangerous point with this pandemic. … “It’s not easy and it’s not fair, but it’s a sacrifice we have to make.” … “If we don’t get this right, it drags on.”

After the football game in Kasson, Swanson and I had talked for a few minutes about what this season has been like. He said, “I'm just glad the kids all had the opportunity to experience it. Hopefully they're able to compete in other things, but there's a lot of other important things in life and we’ve got to keep our priorities straight.”

“It's bigger than just sports and football. We're trying to teach our kids that all the time. Athletics don't define you; it's what you do outside athletics that help define you. The winning and losing doesn't define who we are as people. It's how we react and how we take these things and learn from them. I'm proud of our kids and the program. … We're going to ride a bus home together as a team one more time and we got closure as a team. I think that's more important this year than at any time.”
Byron football coach Ben Halder