“As Is The Whole Year, It’s Just Weirder Than Weird” 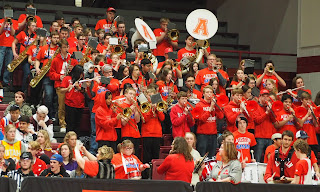 Crazy Train, Seven Nation Army, Firework, 25 or 6 to 4, Uptown Funk, Final Countdown, Gangnam Style, Hey Baby, The Horse. Name a popular pep band song and try to remember how it sounds. Because most of us haven’t listened to a live pep band, marching band or school orchestra for more than a year.

The last time we heard two pep bands play during a big game in a big arena was last year’s girls state basketball tournament at Williams Arena and Maturi Pavilion. From Waseca and Sauk Centre and DeLaSalle and Farmington and Hopkins and Stillwater and St. Michael-Albertville and beyond, the bands played loud and proud as their teams competed. That tournament, of course, was stopped at the midway point due to the Covid-19 pandemic, and bands have now been basically sidelined for more than 12 months.

“As is the whole year, it’s just weirder than weird,” said Marshall High School band director Wayne Ivers. The Tigers girls basketball team played in the state semifinals at Target Center on Tuesday evening and will play for a state title on Friday. In normal times the band kids would have boarded a bus for Minneapolis and played their hearts out before, during and after the games, making lifetime memories.

“For us, it’s a state tournament two or three times a year,” Ivers said. “The kids get really used to it. It’s what they do.”

For band programs all over the state, this school year has been filled with challenges. With virtual learning, it’s difficult for directors to gauge if students are getting enough practice time, and with hybrid learning entire bands are not able to come together and rehearse.

“I’m fortunate to work with other colleagues so we can split (students) up for (online) lessons,” said Farmington High School band director Erin Holmes. “But it is weird to not see some of the kids in person for two and a half months.”

Tim Gleason, a band director and head girls basketball coach at Winona High School, said, “We’re mindful of everything we’ve lost; I miss what we used to have. Even watching the NCAA tournaments, we’re so used to watching on TV and seeing the bands. Bands are so much a part of those experiences. When you think Grand Rapids or Farmington, part of what you think about is the band. That’s part of our culture, part of our school environments.”

State-mandated attendance caps for fall and winter sports limited what bands could do. If bands sat in the bleachers, they counted against the spectator limit. Pep bands and marching bands were permitted to play before football and soccer games but usually weren’t able to remain and watch those games. And that’s no fun.

The Fergus Falls High School band played at two football games while standing on the track.

“Playing outside was easy, with everybody spaced out and staying safe,” said director Scott Kummrow. “But now recruiting kids for band is difficult because the kids aren’t seeing our things at full speed. Hearing the pep band, they get turned on to it, and they want to do that. We haven’t had any events with everybody there, blowing the roof off the place.”

The Farmington marching band rehearsed in small groups last summer, with the entire group never coming together until near the end.

“We tried to march all summer, staying in pods,” Holmes said. “I worked with kids on four different fields. We got one full marching band rehearsal with everybody and one performance for our parents and that was it.”

Band teachers and band kids, however, are nothing if not adaptable. Put a challenge in front of them and they’ll figure something out.

“They’re working really hard, no matter what,” Holmes said. “They are missing it but they’re excited about every little opportunity. We did some concert stuff this fall, we did hockey and basketball sendoffs this winter. They were excited to do whatever they could do; wearing masks, bell covers, whatever it took.”

At Fergus Falls, Kummrow and his colleagues got creative and put together a recording of pep band tunes.

“When it became clear that nothing was going to open for us, the other directors and I came up with the idea of a pep band recording, an album,” he said. “We had a sound engineer who worked with us on five nights and the band boosters brought supper to the kids every night. When I ask the kids what’s the best thing about this year, they say those recording sessions were awesome. We also got something that we needed, with people always wanting recordings of our stuff.”

St. Charles High School band director Andy Marsolek, a former student of Gleason’s at Winona, found a work-around while the band was unable to perform at basketball games. He gathered kids in the band room with microphones that were connected to the sound system in the gym. That allowed teams and fans to at least hear the band.

Dan Gaisford, director of Hopkins High School’s pep band (known as the Lean Mean Performance Machine), said the band was able to rehearse outdoors last fall, but when the weather turned cold no indoor sessions were held for several weeks as they waited for masks and bell covers for their instruments to arrive.

The Lean Mean Performance Machine played from the track at two football games last fall and plans to play at a track meet this spring.

In normal times, band directors maintain a hectic schedule of lessons and rehearsals during the school day and regular performances at sporting events. Marshall’s Ivey talked about the strangeness of being home at 4 o’clock most days.

“That’s just unheard of,” he said. “On a regular Tuesday in the middle of winter I’ll do stuff after school, do pep band and get home at 9 o’clock. It’s so different. There’s none of that.

“A lot of the fun stuff is pep band, marching band, jazz band, taking a bus to Minneapolis for the big game. Those are the things the kids love, and poof! My ninth-graders don’t even know what playing in a pep band is like. We’re really worried about retention and recruitment, because none of those thing have happened.”

When the Fergus Falls boys basketball team played in the state tournament on Wednesday, people not making the trip watched the game on a big screen in the school auditorium. An added special twist was the presence of the pep band, performing their favorite tunes just as they would had they been at the game in person.

“We tried to make it seem as much the real thing as we can,” Kummrow said. “It’s all about thinking about what the kids have lost and not just giving up. When I talk to alumni about their favorite experiences, they’ll talk about trips and things, but playing at playoff games always comes up. It’s such a fun atmosphere with so much on the line. That energy is so much fun.”

Holmes has an added perspective on band performances at sporting events, because her husband Jon is Farmington’s head girls hockey coach. When the Tigers qualified for the recent state tournament at Xcel Energy Center, the band performed at a send-off from school. But at the tournament, the absence of live music was quite noticeable.

“In the Xcel Center, I could hear Jon coaching from the bench,” Erin said. “That was strange.”

“We’re mindful of everything we’ve lost; I miss what we used to have. Even watching the NCAA tournaments, we’re so used to watching on TV and seeing the bands. Bands are so much a part of those experiences. When you think Grand Rapids or Farmington, part of what you think about is the band. That’s part of our culture, part of our school environments.”
Tim Gleason, Winona High School band director