At 21, Breckenridge Grad Leads The Cowboys 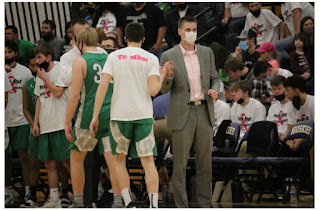 Stevin Lipp was having lunch with his father in downtown Breckenridge one day in mid-October. Stevin’s phone chirped and he stepped outside Wilkin Drink & Eatery to take the call. He stood on the sidewalk at the corner of Minnesota Avenue and 5th Street in the heart of the town of 3,400 that rides the North Dakota border 56 miles south of Fargo.

It’s a four-way stop where almost everyone who stops recognizes the other drivers as well as pedestrians. Lipp heard folks in vehicles greet him by name. “Hey Stevin!” “How’re you doin’?”

He remembers the moment because the phone call was from Breckenridge High School activities director Chad Fredericksen. That morning, the 21-year-old Lipp had interviewed with Fredericksen and other members of a committee who were in the process of hiring a boys basketball coach for the Cowboys.

Fredericksen said, “Stevin, if I were to ask you if you wanted this job right now, what would you say?” Lipp replied, “Without hesitation, absolutely. Yes.”

At that moment, at the intersection of Minnesota Avenue and 5th Street, Lipp became Minnesota’s youngest head coach of a high school boys basketball team and one of the youngest head coaches in any sport. (The only current younger head coach I’m aware of is Aitkin dance coach Kaitlin Wake, 19.) 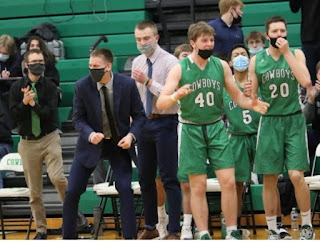 The Lipp family has a strong sports-related history in Breckenridge. Stevin’s late grandfather, also named Steve Lipp, was the boys basketball coach in the 1960s and 1970s, taking the Cowboys to the state tournament in 1976, 1978 and 1979. Stevin’s father, Rollie, and uncles played at Breckenridge. Rollie is a former public-address announcer for North Dakota State basketball games and is a familiar radio and streaming voice of Cowboys games.

The Cowboys boys basketball team didn’t return to the state tournament until 2015, when Stevin Lipp was a sophomore, and again when he was a senior in 2017.

The younger Lipp was a 1,000-point scorer for the Cowboys and set a school single-game record of 41 points. After graduating in 2017, Stevin crossed the Red River into Wahpeton to play basketball and earn an associate’s degree in criminal justice from North Dakota State College of Science in 2019. He coached AAU basketball for two years and took a job selling insurance in Fargo.

When the coaching job at his high school was posted, Lipp contacted Fredericksen.

“He reached out to me and asked if it would be a stretch for him to apply,” Fredericksen said. “I said, ‘No, we’ll look at it and call you back if you’re not going to be a candidate.’ He turned out to be a really great candidate.”

Lipp said, “They might have been surprised that I wanted to be in this position at a young age. I felt pretty good about it. I knew I accurately projected how passionate I was about wanting the job, what it meant to me. I laid down my expectations of where I’d like to see the program.

“They must have liked what they heard. I’m certainly glad the way the cards got dealt and I’m happy to be in this community.”

The appeal of having Lipp coach was clear to everyone who knew him. He was a three-sport athlete (basketball, football, track) in high school and the current Cowboys athletes certainly knew who he was.

“I think most of the kids in our program kind of idolized Stevin, because he was on some pretty good teams that made it to state,” Fredericksen said. “There are lot of angles that kids looked up to.”

Lipp kept his insurance job with the Todd Vanyo State Farm agency in Fargo, although he moved back to Breckenridge.

“He’s been great,” Lipp said of Vanyo. “I told him I planned on applying for this job. I wasn’t anticipating they’d give me an offer to stick around, but they let me work from home here in Breckenridge. It’s been great.”

His days are focused on insurance early and basketball late. The Cowboys opened the season with five victories before losing at Wahpeton 84-76 on Saturday. In their previous two games they beat Perham 59-46 and Barnesville 61-59 in overtime.

“Wahpeton shot 56 percent from the three-point line,” Lipp said. “That one stung a little. Our kids really wanted it. But we told them if we went 2-1 vs. Perham, Barnesville and Wahpeton, we’d take it.”

The Cowboys lead the Heart O’ Lakes Conference with a 4-0 record in league play, averaging 72 points while allowing an average of 56.8. Their top scorer is Cooper Yaggie (19.7 points per game), followed by Anthony Conzemius (12.7), Jonah Christensen (12.0), Sebastian Anderson (9.2) and Adam Ohm (7.5). They will play host to Frazee on Thursday and Morris Area/Chokio-Alberta on Friday. 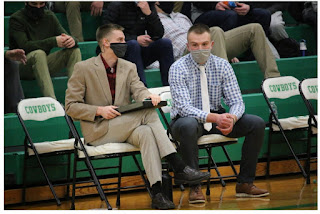 Lipp’s assistant coaches are Jordan Christensen, 25, Derek Grahn, 31, and 70-something Dick Cortes. (In this photo are Lipp and Christensen.)

Fredericksen said of Lipp, “He’s one of our own so we knew him really well. We knew how hard he works and how well he knows basketball. He came in and interviewed and knocked our socks off. It’s been good. He’s learning, he got a couple coaches on staff who have helped and mentored him a little bit.”

Lipp has experienced what he called “a couple weird looks, weird vibes” from officials who don’t realize he’s the head coach. “But once they chat with me a little bit and see I’m respecting the officials and the other teams’ programs, I’m sure they’ll come along and see that I’m trying to do what’s best for the basketball community. And at the end of the day that’s why we all, as officials or coaches, do what’s best for the game and the kids.”

Lipp, who will be 22 in March, said when he applied for the job he didn’t know if he stood a chance.

“I was assuming I wouldn’t this get kind of opportunity for a long time if I didn’t put my hat in the ring,” he said. “I had two years of AAU experience, which is completely different. It was kind of how I landed the job at State Farm; I never came in thinking I would get this job. But I just love getting the experience whether the interview goes well or if I get the job.

“It’s been a great experience for me. I just hope the kids and other coaches are enjoying it as much as I am.”

“They might have been surprised that I wanted to be in this position at a young age. I felt pretty good about it. I knew I accurately projected how passionate I was about wanting the job, what it meant to me. I laid down my expectations of where I’d like to see the program. They must have liked what they heard. I’m certainly glad the way the cards got deals and I’m happy to be in this community.”