After Disappointing End To 2020, Farmington Girls Basketball Is Excited

Last March in this space, these words were posted: “As disappointing as this is, it has been heartening to see how so many teams and schools have responded. The Farmington High School girls basketball team, which was in line to meet Hopkins in the Class 4A championship game Saturday, Tweeted a team photo with this message: ‘Just because we couldn’t play basketball tonight doesn’t mean we would waste an opportunity to spend time with each other!’ ”

That was written after the 2020 girls state basketball tournament was suddenly halted because of the Covid-19 virus. The Farmington girls gathered again on the court Monday for the first practice of the 2021 season, and to say it was a relief would be an understatement.

“Today was just lots of excitement, and you could tell there was a lot of energy and joy,” said coach Liz Carpentier. “I think the kids had so much fun seeing each other and being able to socialize, which is a good thing for them. They haven't gotten to do that in the last few months. I'm thankful to be back. We're not going to take any day for granted.”

That is one of the lessons learned in the last 10 months: Don’t take anything for granted. The Tigers, playing at state for the first time in school history, reached the Class 4A championship game against Hopkins before everything was shut down. Hopkins was on a streak of 62 victories in a row and seeking back-to-back state titles. Farmington was 29-2.

Looking back now, Farmington’s Sophie Hart, a 6-foot-4 senior who will play next season at North Carolina State, said the team’s 78-59 state semifinal win over St. Michael-Albertville stands out in her memories.

“I was just kind of joyous, I guess that's the word, that whole night was just joyous, it was fun, uplifting,” she said. “If I could relive one night or one game from that season, I’d probably go back to that one.

I wish I had known it was our last game, because it was hard to never have that closure, especially when we’re not able to play with our (2020) seniors again. They were a big part of the team last year and we'll miss them, but that was very hard just to know that we're just gone all of a sudden. It wasn't expected.”

Farmington’s team motto this season is “Whatever It Takes.”

Monday morning, seven hours before the first practice, this was Tweeted by the team account (@fhs_gbball): “We made it through the longest off-season ever. Excited to hit the court with our players and coaching staff. Thankful for every day together. #WhateverItTakes”

“One goal that I think most of us have is just to make it throughout the season with all of us staying healthy and just keep playing strong and together, but mostly we want stay healthy so we can keep finishing the season,” Scott said.

“You never know,” said Blandin. “Our first game could be our last game; you never know how Covid is going to play out. So I think we just need to play like every game is our last game, no matter where we are in the season.”

This season will be different in ways that go beyond the late start date, which was mandated for winter sports by the state of Minnesota. All of Farmington’s regular-season games will be against other teams in the South Suburban Conference and all teams statewide will wear masks for practices and games. 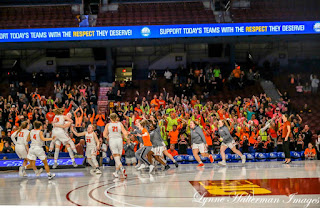 “If it's a way for us to be on the court, we're going to do it,” Hart said of masks. “I see a lot of people complaining about it but if we could have worn masks for our championship game, I would have done it. It’s to keep everybody safe and it's really not the worst thing.

“I think another piece about it, too, is protecting our community. I feel like we have such strong community support behind our program, it's been amazing to us. And just to know that if this is what helps keep everybody safe and keep our support system safe, this is what we need to be doing.”

This year’s Tigers held virtual meetings during December while practices were prohibited.

“We did a lot of offensive strategy, defense, just a lot of talking, like our chalk talks, diagramming plays,” said Carpentier, who is beginning her sixth year as head coach. “There are some things that you may never do really as much because we're always on the court and we don't take enough time to do that. So we utilized that time to do a lot of diagramming and talking through things, and I thought it was good and beneficial.”

The first game on the Tigers schedule is Jan. 14 at Lakeville North. Some of the team’s goals are simple: Stay healthy and stay together.

Being back at practice “feels amazing after such a long time not being with your teammates,” Kindseth said. “Going to the gym by yourself or maybe with one or two other people, it gets boring. It's harder to continue to do that when you don't have a team surrounding you to push you to get better.”

Blandin added, “I was just really excited to get back on the court with these guys, we've been playing together since like travel. And it's just been such a long wait and I'm just really glad we're back and we're just going to keep going up from here.”

“Today was just lots of excitement, and you could tell there was a lot of energy and joy. I think the kids had so much fun seeing each other and being able to socialize, which is a good thing for them. They haven't gotten to do that in the last few months. I'm thankful to be back. We're not going to take any day for granted.”
Farmington coach Liz Carpentier