NORTHFIELD -- Saturday was a history-making day for the cross-country teams from Perham High School. Both Yellowjackets squads captured Class 1A state championships at St. Olaf College, and the historical record will forever state that Perham became the first school to win both crowns for three years in a row.

Jeff Morris is the head coach of both teams, and this is his 18th year in that post. Every fan of Minnesota high school cross-country is familiar with Perham's success; the boys cross-country team now owns eight state championships and the girls have won it four times. Individually, Kevin Lachowitzer of Perham won cross-country state titles in 2006 and 2007, Keeghan Hurley did the same in 2013 and Maddie McClellan was the 1A girls champ in 2009. 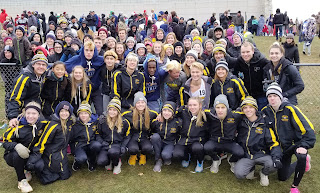 One of the first Perham stars under Morris’ watch was Gabriel Anderson, who as a senior in 2004 won a track state title in the 800 meters. That was the first state championship won by a Morris-coached Perham runner.

Anderson went on to compete at the University of Minnesota and then as a professional runner. After her marriage to fellow Gophers runner Justin Grunewald, she was known as Gabe Grunewald. Gabe died in June in Minneapolis at age 32; a decade earlier she had been diagnosed with a rare form of cancer.

Her fight, her inspiration lives on in the running community nationally and around the world. Gabe and Justin began the Brave Like Gabe Foundation during her days with cancer, and runners of all ages have been inspired.

Gabe died a few weeks before the start of the 2019 high school cross-country season. Her loss hit folks in her hometown hard.

"We’ve actually had a kind of rough season, just a lot of things that have been going on mentally, physically, emotionally with our team,” Morris said Saturday. “And it started out with everything that happened with Gabe this past summer.

“We started off the season with the Brave Like Gabe (an inaugural early-season invitational) and I told the kids we’re going to focus on being thermostats, not thermometers, kind of letting our attitude and effort being where we want it to be. And it seemed like after that, everything that could happen wrong happened. We have one kid running on a non-displaced fracture, another kid with a stress fracture. We’ve had sickness. And the cool thing with the kids was they made no excuses. They stepped up to the moment and it was just fun.”

It’s not hard to imagine that the Yellowjackets felt pressure coming into the state championship races. Facing the prospect of making history can do that.

“I think they feel pressure from not wanting to let people down,” Morris said. “That’s the biggest thing. My daughter (Mya) is a ninth-grader and last night in the room her and her friends were saying, ‘We’re so nervous.’ At the start line today I just reminded them that the most important thing was that they were doing this for each other. We kind of focus on faith, love and hope. And we said if we run with that and kind of make it about that, it doesn’t matter how we do. It matters in our eyes what we do, and the rest of the what-ifs and what other people think, that doesn’t matter and that’s a good life lesson to learn.”

In the days leading up to the state meet, the Yellowjackets watched a documentary about Gabe, which brought some of the runners to tears.

“I think it’s taught the kids that in a moment like that, where you had everything that Gabe went through, you realize that the running doesn’t matter anymore,” said Morris, who became head coach in Perham when Gabe was a junior. “The running is secondary, and I think these kids learn that, ‘Hey, these races are important and we had a great moment and we want to do something great,’ but to realize it’s just a race. There are bigger things that are way more important. Because you’re not always going to win. I’ve been here when we’ve been on the other side of it. If you can learn from that and take that with you for the rest of life, it’s going to matter. And that’s how Gabe will live on in these kids.”

A little extra motivation arrived in the form of some special gifts in preparation for state: sweatshirts carrying the slogan “Running On Hope” ... that’s a phrase made famous by Gabe and the Brave Like Gabe Foundation. They were sent to the Yellowjackets by Justin Grunewald.

“The kids were pretty emotional about that,” Morris said. “Every kid and every coach got one, and he wouldn’t even let me pay for them.”

Justin, in New York for Sunday’s New York City Marathon, said via phone Saturday night that he is inspired by lots of people from Perham.

“The Perham community, their cross-country teams, their volleyball team, their boosters, KLN, which is a wonderful company, they’ve all shown so much support for Gabriel and the foundation,” he said. “On top of that, right when I came out of college, myself and another guy became the first post-collegiate runners Jeff coached. He gave me some of my best years of running, and he never took a penny. It was a long-overdue thank you. I just felt with all that their kids have done and how inspirational they’ve been, buying them sweatshirts made a lot of sense.”

Through souvenir sales and donations from teams that participated in the first annual Brave Like Gabe Invitational, the Yellowjackets raised $5,680 for the Brave Like Gabe Foundation.

“These kids are who is going to change the future," Justin said. “I can only do so much, and Gabriel gave her heart and soul. Seeing these kids be good stewards, raising money for the foundation, I’m speechless.

“They’re raising money to make the world a better place. Hopefully none of them are afflicted with cancer, but they’re spreading hope for those who are. They’re all winners in my book.”