The following letter is posted here with permission of the author...

I would like to share some observations of your amazing track and field coaching staff, if I may. I am a 45-year state track meet official and, because of a background in special education, I have taken on the role of official for handicapped athletes at the Minnesota State High School League track and field championships.

The story begins on Saturday morning with a 100-meter wheelchair race between Blake Eaton of Duluth Denfeld and Macario Palomares of Buffalo during the state meet at St. Michael-Albertville High School. Almost halfway into the race, Blake blew a tire on his chair. The tire flew off but Macario was able to avoid it. Blake finished the race on a tire and a rim. Because the tire blew a stem, Blake was convinced that he was done for the meet. (He was scheduled to wheel the 800m by himself and then to compete against Macario again in the 200m.)

This is when the Buffalo coaching staff became involved. Their first possible solution suggested was to offer Macario’s chair to Blake for use in the 800. They weren’t sure he would fit but at least he could compete once more. In the meantime, Blake’s father was on the phone trying to find a tire before the finish of the meet. I became busy with other non-handicapped athletes but when I came back I learned that Buffalo -- that’s right, the opponent school -- had a new tire at their school and a coach had been dispatched to bring it back … hopefully in time for the 200m if not the 800m.

About 10 minutes before the 800m race a new tire arrived and was placed on the chair and it fit, perfectly!! … except that there was no push rail; that’s the part that the racer’s hands touch to turn the wheels. Three or four old wheels were tried but none locked on. It had to be the new wheel. Once again Blake was resigned to being unable to race. 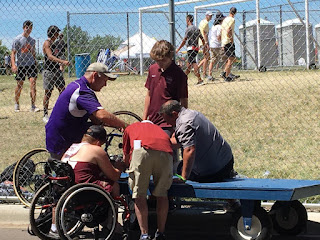 The 800m scheduled time came and went and Blake missed the race. From my position in the clerking area, I watched and listened as a Buffalo coach called the facilities manager to get a screwdriver with the intention of removing a push rail from the old wheel and installing it on the new wheel. This is a delicate process that involves removing numerous screws, removing a push rail from another wheel, lining it up on the new wheel, and carefully replacing the screws.

And then it was time to take the wheelers out on the track for the 200m race; Macario and I started out to the track. I told Blake that I would watch for him and try to get him into the race if he could make it. But my last look was about five adults; Denfeld and Buffalo coache and Blake’s dad struggling with the push rail and wheel. I wasn’t optimistic.

At race time, Macario was lined up in lane 5, with his axle on the line prepared to start, when he looked across the track and said, “There he is!” Miraculously, the support team had gotten the push rail installed and Blake was back on his wheels. The PA announcer said, “Mr. Starter, hold the race!” Blake was back in business.

The two wheelchair athletes raced again and the finish order wasn’t important. What was important is that the Buffalo High School track and field staff worked in harmony with the Denfeld coaches and Blake’s father to provide an opportunity to race for an opponent just because they could.

I had tears in my eyes several times during this process. I was very moved by the sportsmanship and the selflessness of the Buffalo coaches. If ever a life lesson was to be learned, the people who teach, guide and coach your young people as members of the track coaching staff taught it.

At the starting line of the 200m wheelchair race, as Blake Eaton of Duluth Denfeld lined up in lane 4 next to Buffalo’s Macario Palomares in lane 5, I commented to Blake: “I didn’t think that you were going to make it.” Blake replied: “Neither did I. The Buffalo coaches are BEASTS!” 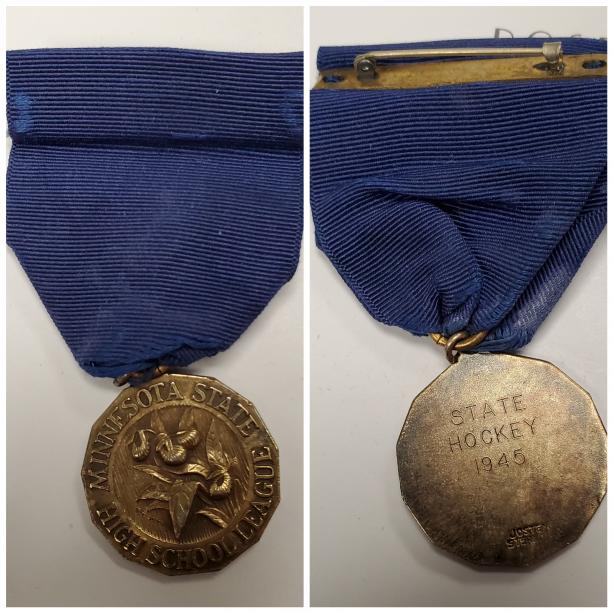 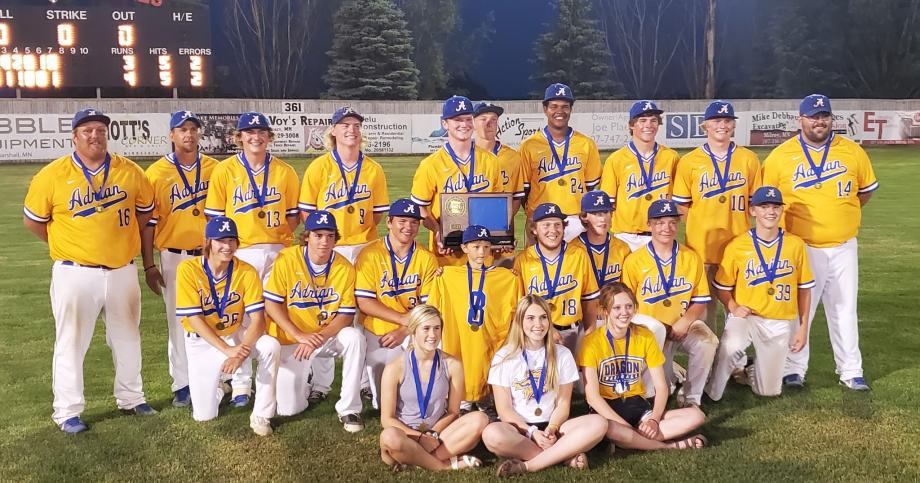