A Teammate, An Opponent And What Sportsmanship Means 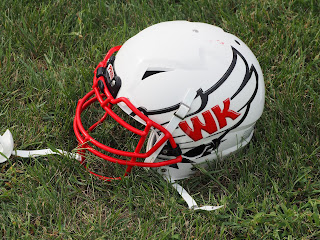 I'll be at Wabasha-Kellogg High School on Thursday, Sept. 2, to watch the Falcons play their first football game in two years. After having their entire 2020 season wiped out by Covid, they will host Cleveland in Week 1. My last trip to Wabasha-Kellogg came 10 years ago this month; I wrote about how the Falcons and the football team from Southland came together to remember and honor Cole Younker, a three-sport W-K athlete who was killed in a vehicle accident in September 2010. Below is the John's Journal story that was posted on Sept. 6, 2011 ... the tree that the two teams planted is now 10 years old. I can't wait to see it again. I bet it's beautiful.

Remembering A Teammate, An Opponent And What Sportsmanship Means

WABASHA – Across Minnesota last Friday, 104 high school football games were played. Every one of those games was important, but what took place prior to one specific game was very, very special.

It was a scene unlike anything I have witnessed in several decades of writing about sports of all kinds, from the professional ranks to the youth level. I doubt I will ever see anything like it again. The story, which began a year ago with a terrible tragedy, continued Friday evening with memories, tears and special tributes.

Cole Younker was 16 years old when he was killed in a car accident on Sept. 10 last year. He was a passenger in a car that collided with a semi-trailer on Highway 61 in Wabasha. Cole was a three-sport athlete at Wabasha-Kellogg High School.

It was a simple act, really, involving the planting of a tree and releasing of balloons. But simple acts can have the greatest impact.

The planning began when Southland athletic director Bill Feuchtenberger phoned Wabasha-Kellogg athletic director/football coach Nick Richmond. “He said Southland wanted to do something when the time was right,” Richmond said. “We decided we were going to do a tree and he said, ‘Whatever it takes, just send us a bill and we’ll do it.’ ”

Cole’s mother, Bonnie Younker, was asked to select a tree and she picked out a beauty. It’s a red maple, which will someday stand 35 to 40 foot tall. It was paid for by Southland. Between warm-ups and the start of Friday’s game, both teams lined up on either side of the planting site, which is in a corner of the football/track complex. Four captains from each squad placed the tree in a hole (that had been dug by Richmond a day earlier) and then used shovels to fill in the dirt around the trunk.

Bonnie stood with the Wabasha-Kellogg Falcons and cried while the tree in memory of Cole was planted. When the job was done, she hugged all eight captains.

It was quite a sight: young boys in football uniforms (minus helmets) taking their time and working together to get that tree started on its new life. A few fans gathered around to watch. Some of them cried and others sniffed back the tears.

“I’m very fortunate, along with the rest of the coaching staff, in that we get to play in a conference, the Three Rivers North and South, in which all of us coaches get along very well,” Kennedy had told me earlier. “When something like this happens, I think it affects everybody. He was a son, a sibling and it was a devastating thing. Why not try and do something in his honor, to really show that it’s only a game and to really show true sportsmanship? We always talk about being a class act at Southland, and Nick does the same thing over here, and that’s what it’s all about.”

On the right shoulder of each Falcons jersey this season are two small black numbers: 32. That was Cole’s number. Stickers with his number were affixed to their helmets. Some of the players had written Cole’s initials, CJR, on black anti-glare patches they wore under their eyes. Some have tattoos dedicated to Cole.

On Thursday, Richmond sat down to watch the film from last year’s game between Wabasha-Kellogg and Southland. He admitted that it was hard to watch as Cole made tackles, and he didn’t let the players watch the video.

“The one-year anniversary is coming up and the kids are still feeling it,” he said.

As a recording of the national anthem was played, the teams stood in lines at each end of the field. Bonnie Younker and several other women then brought out bundles of balloons and handed one to each Falcon. The players had written notes to Cole, which had been placed inside the balloons. As the balloons were released into the warm Minnesota sky, they floated up and began taking a southwesterly tack toward the nearby Mississippi River.

“I get goosebumps when I say this, but this is why we do this,” said Kennedy. “I’m starting my 27th year of coaching. And let me tell you something, I think this is pretty special to be able to be a part of this and help do something for Wabasha and for the family.

“I lost my father when he went in for gall bladder surgery and never came home. It just brings back those kinds of feelings for me personally. I am very blessed, because 55 of these kids drove six and a half hours in a snowstorm to be at my dad’s wake service. That’s pretty special. It’s only a game, and this puts it in perspective that there are more important things.”

The game ended with Southland winning 48-0. But that’s not the memory that will remain. The sight of a grieving mother, of young boys doing something larger than themselves and their game, of all those balloons sailing away ... all of it unforgettable.

“In a weird way, I expected a call from them just because I know coach Kennedy,” Richmond said. “From the first time I met him, he was a class act. I love the guy. So I knew it was coming. How do you show sportsmanship better than what they’re doing?”

As the season opener neared, some of the Falcons wrote notes to Cole that were separate from the notes that sailed away with the balloons. One of them read:

“Hey buddy, we miss you. It’s not the same here anymore. We’re playing for you, OK? Thanks for everything you’ve ever done to and for me. Miss you.”