Brayden Weber Is Healthy And Back In Action

You talk to Brayden Weber and his mother about what the Becker High School senior has experienced – beginning with the day he died in late February – and you hear the same words: A Blessing.

“It’s a blessing to even have a season,” Brayden told me over the phone after football practice one day last week. He’s back on the field with the Becker Bulldogs, which is quite a long way from the day he collapsed in a semifinal match at the state wrestling tournament in St. Paul.

As he told me in March, “They don’t know if my heart actually stopped; they just couldn’t find a pulse. They said with an irregular rhythm it could just be hard to detect a pulse. But they said I wasn't breathing on my own for five minutes, which is like a good indication that I was dead.”

The medical team at the tournament performed CPR on Brayden and had an automated external defibrillator ready just in case. During a long string of medical tests, he was diagnosed with supraventricular tachycardia, a heart rhythm disorder caused by abnormal electrical signals. A surgical procedure in June corrected the problem and a small cardiac monitor was implanted near his heart.

The best news came in early July when he was cleared to play football.

“He’s in his glory out there,” said Brayden’s mom, Sara Waytashek.

Brayden called it “just a big relief. It was so good to hear you can go back and do something you love. I waited four or five months to get that news and I had a gut feeling it was going to be OK.” 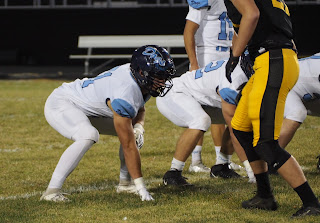 He will play college football somewhere. Dwight Lundeen, who has seen a few things in his 51 years as the only head football coach Becker has ever had, said, “He’s a great leader, a real good football player. He’s played great.”

Brayden, a team captain, is 6-foot-2 and 225 pounds. He plays outside linebacker on defense and right tackle on offense, rarely leaving the field. Since practice began, his coaches have been keeping an eye on him. An AED is on hand at every practice and every game, just in case.

“I don’t think you can ever put that out of your mind,” Lundeen said of Weber’s heart. “Our eyes are on him constantly. Every time he looks a little different, a little fatigued, a little paler -- and it could be just from running hard -- but we have not had one situation where we needed to pull him out because of that.”

Brayden said he is still working to keep his heart out of his mind.

“Not every time it starts beating fast, but sometimes it’s like, ‘Wooh, that’s a little fast,’ ” he said. “I’ve got to stop being gun-shy about it. The first couple weeks of football were definitively tough for me. I’ve been getting better at it.”

Waytashek has an especially close view of the Bulldogs’ games because she is a team photographer. She can look through her lens and get a close-up view of her son.

Lundeen was in Arizona when Weber collapsed at the wrestling tournament. One of the assistant football coaches, Hokan Bengston, called him with the news.

“He said we had a real serious deal with Brayden. I told him we’ll be praying for him and let me know any news you get.”

As with many teams in all fall sports, things have been topsy-turvy for the Bulldogs, who will take a 2-2 record into Thursday’s final regular-game against Willmar. Two of their games were cancelled the day before kickoff due to Covid-19 issues with their opponents, and Lundeen said every week individual players have had to quarantine.

“Every day is different,” he said. “It’s an ever-changing picture. It’s very unique. In my 50 years, nothing has come close to this ... We talk every week that this might be it. We’re going to play the best we can, enjoy it win or lose, and we’re going to have fun playing this great game.”

Brayden said, “We have to go with whatever is given to us and make the best out of it. You never know with everything going on right now. It’s a blessing to have a season.”

“They don’t know if my heart actually stopped; they just couldn’t find a pulse. They said with an irregular rhythm it could just be hard to detect a pulse. But they said I wasn't breathing on my own for five minutes, which is like a good indication that I was dead.”
Brayden Weber