ALBANY – The glowing late-summer sun dove into the horizon behind the scoreboard at the Albany High School football field on Thursday evening, followed on the opposite end of the sky by a rising football moon … orange, giant, full, glorious.

For more years than anyone can remember, the home of the Albany Huskies has been known as Michael Field. A second title was added during a sweet on-field ceremony Thursday. The scoreboard and press box now carry new signage declaring “HERGES STADIUM” in honor of Pete Herges, 90, who coached the Huskies to glory from the 1950s until the 1980s. Pete and his wife Joan, along with their extended family and nearly 50 of Pete’s former players, were honored guests Thursday. 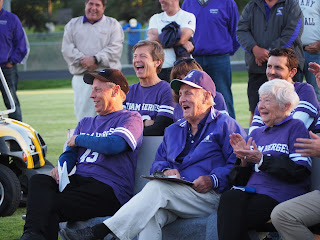 B.J. Michael, the Albany superintendent from 1944 to 1971, hired Pete in 1954. The field remains under B.J.’s name and the entirety of the sterling football and track facility now carries Herges’ name. The word “legendary” doesn’t have enough weight to properly describe the reverence for Herges in Albany and central Minnesota. The process for finding his replacement when he retired from coaching football in 1980 is telling.

“We lost the first two games and that didn’t go over very well,” Mader said of that 1980 season. “Then we won nine in a row and went to state. I had all kinds of advice. One thing Pete never did is interfere, never. When I went to him for advice he gave a lot of good guidance.

“Pete told me when I took the job, ‘You’re going to win the conference the next three years unless you screw it up.’ And we did. We won a lot of them.”

Mader coached until 2003, when then-assistant and current head coach Mike Kleinschmidt took over. That makes three head football coaches since 1954. Another sign of long-term commitment in Albany: Thursday’s ceremony was directed by Scott Buntje, who is only Albany’s fourth athletic director since 1954 (Herges and Mader are among those four). 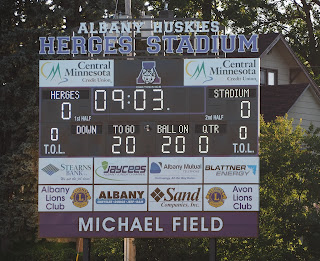 Joe Hasbrouck was a multi-sport athlete who graduated from Albany in 1971. He was a two-time state high school golf champion, went to the University of Houston on a golf scholarship and remained in Houston, where he is now retired. He was “crushed” that he was unable to attend Thursday’s ceremony. His admiration for Herges is boundless.

“He was stern and you respected him. He didn’t pamper anybody. When we would be behind, we would come into halftime and he would grab the blockers and ask, ‘What’s going on? Why isn’t that working, why isn’t this working?’ He would fix the problems and we kept winning games. He was a very solid guy. To this day everybody respects him greatly.”

Hasbrouck remembers coming into a football season after most of the starters from the previous high-level team had graduated.

“We had lost one game in three years but the next year we lost all of our super good guys and our quarterback. That summer we were thinking, ‘What are we going to do? (Teammate) Dickie Glatzmaier said, ‘I’ll tell you one thing, we’ve got Coach Herges.’ And sure enough, with a bunch of rookies we went undefeated.”

Pete and Joan, their family, Mader, Kleinschmidt and Pete’s old players gathered on the home sideline of the football field, in front of a large group of locals in the stands. They wore mostly purple (the school colors are purple and white). Some wore, as did Pete and his family, purple t-shirts with “Team Herges” on the front. There were a couple of old-school letter jackets and sweatshirts worn by Pete’s players. 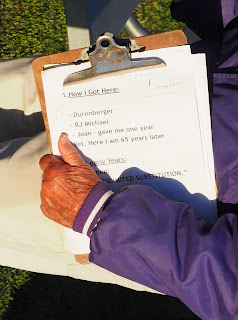 The Albany High School band played the school song (“Anchors Aweigh”) as Pete’s fellow members of American Legion Post 482 presented the colors. The grass on the football field was immaculate, surrounded by a brand-new track that – like the grass – bore no lines.

The Huskies have played football on their current field since 1967, where not much has changed over the years. They still win, they still wear purple, they run a small number of plays to perfection, they don’t pass much and they still run some of the same plays as the old-timers did under Herges decades ago.

The ceremony’s final speaker was Pete himself. Always a coach, he had notes written on a piece of paper, hanging on a clipboard. Item No. 1 read, “How I got here.” B.J. Michael’s name was mentioned underneath, along with this: “Joan – gave me one year. Yet, here I am 65 years later.”

And there he was, the man of the hour, standing in the glorious sunshine at Herges Stadium.

“We had lost one game in three years but the next year we lost all of our super good guys and our quarterback. That summer we were thinking, ‘What are we going to do? (Teammate) Dickie Glatzmaier said, ‘I’ll tell you one thing, we’ve got Coach Herges.’ And sure enough, with a bunch of rookies we went undefeated.”
Joe Hasbrouck

John’s Journal: Timing is Everything for Josh Gerber