John’s Journal: Finding A Home On The Road

The volleyball players from St. Charles High School were counting down the days until the first practice of the 2021 season. As the moment grew closer they counted down the hours until Monday morning, when they would step on the court and get the season rolling.

On Friday, however, a curveball was sent their way. Their school buildings are undergoing construction and renovation projects, and school officials learned Friday that there was no place in town to hold volleyball practice. The high school gym is a mess right now, which was no surprise. Because of that, the gym at the elementary school was the planned-for practice site. But painting work there that was scheduled to be completed before Monday will not be finished until (hopefully) later this week.

One option was to hold practice outdoors at four sand volleyball courts in town. Volleyball coach Tracie Schaber has a connection with the person in charge of those courts … her husband Rick is the city’s parks and recreation director. But a better option was right down the road, less than 10 miles to the west on Highway 14 at Dover-Eyota High School in Eyota.

St. Charles activities director Scott McCready and his counterpart at Dover-Eyota, John Ostrowski, are close, longtime friends. So when McCready called Ostrowski on Friday, he couldn’t even finish his question before Ostrowski said, “What time do you want to practice? We’ll make it work.” 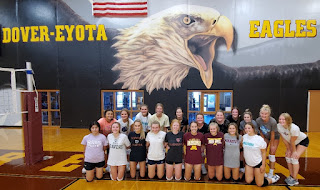 The Dover-Eyota Eagles volleyball team had practice scheduled in the afternoon all week, and the St. Charles Saints had planned to work out in their elementary gym starting at 8 a.m. So the schedules worked out perfectly, and it didn’t take long to get a bus lined up to get the Saints’ varsity to Eyota and back every morning this week. The Saints seventh/eighth-grade and ninth-grade teams are alternating practice times at the elementary cafeteria in St. Charles, so every team has a home.

After last year, when Covid-19 disrupted everything associated with school and activities, the coaches, players and administrators at St. Charles and Dover-Eyota are accustomed to being flexible.

“We were looking forward to some semblance of normalcy, but our coaches and students are used to things getting thrown at you,” Tracie Schaber said. “It’s out of our hands, and you’ve got to do what you need to do to make it work. The kids want to play.”

Monday morning’s scene inside the Eyota gym was a bit odd, with the Saints practicing underneath artwork of a giant screaming eagle – a Dover-Eyota Eagle -- on the wall. Both schools are members of the Three Rivers Conference; they are scheduled to meet Sept. 9 at St. Charles, but there is some uncertainty about when the Saints’ high school gym will be ready.

The gym floor at Dover-Eyota was resurfaced last week, and Monday was the first day anyone was allowed to be on it. Ostrowski told McCready that he and assistant volleyball coach Michelle Anderson (also a school administrative assistant) would set up the nets on the Eagles’ three courts Monday morning, asking, “Would you mind if your team came in at 9?’ ”

In the past, the two schools have had cooperative agreements in track and cross-country, so the administrators have worked closely together many times. When Dover-Eyota had a transportation issue, for example, St. Charles sent over a bus to get Eagles athletes where they needed to be.

“Scott and I have kind of scratched each other’s back many times over the years,” Ostrowski said. “Our relationship is kind of special in that we’re there for each other a lot.”

Many of the St. Charles volleyball players were used to riding a bus, having returned Sunday morning on a 20-hour charter bus excursion from a school trip to Washington, D.C. That makes the ride to Eyota seem like nothing, even if holding the first practice of the season in a conference rival’s gym was not quite normal.

“It's a whole new feel,” said junior captain Lauryn Delger. “It's definitely bigger, which is nice. We didn’t expect to be in our actual high school gym because of the construction, but we did expect to be in the elementary gym at least. So it was definitely unexpected that we're here.” 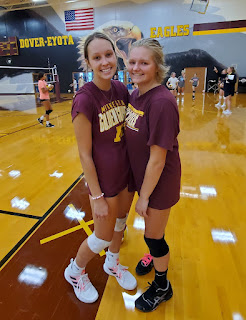 Captain Emma Welliver (pictured, right, with Lauryn), the only senior on the varsity roster along with 16 juniors and six sophomores, said, “We’re making the best out of it, trying to prepare for volleyball season. Even if it's not our gym, we’re trying to play our best.”

The Saints played just a handful of matches last fall before Covid stopped everything, and hopes are high for a full season this fall. The St. Charles softball team had an exceptional season last spring, finishing 24-5 and advancing to the Class 2A state championship game, where the Saints fell to LeSueur-Henderson.

Welliver and Delger, also softball players, hope that experience provides a boost to the volleyball team.

“It kind of makes you want to strive to get far, get there, get that energy, because it's so different than the regular season or just regular playoffs,” Lauryn said of the state softball tournament.

Emma added, “I think it definitely makes you realize how lucky we were for softball and how much hard work it took and then you're like, ‘I want to put that on the volleyball court and do great things.’ ”

No matter where that court is located.

“Scott and I have kind of scratched each other’s back many times over the years. Our relationship is kind of special in that we’re there for each other a lot.”
Dover-Eyota activities director John Ostrowski