When Minnesota’s Suni Lee won the all-around gold medal in the Olympic women’s gymnastics competition, it provided a spark to not only her sport but also her family’s Hmong community. The 18-year-old was among the biggest stars of the Tokyo Games, also bringing home a silver in the team competition and a bronze on the uneven bars.

The USA gymnastics team, which also included Isanti native and team silver medalist Grace McCallum, was a focal point of Minnesota high school gymnastics coaches and athletes as they watched the Olympics.

“We had a team watch party at Chanhassen High School to see the team finals on a big screen,” said Storm coach Chris Lacy. “Eighteen gymnasts from our team were there.” (Photos accompanying this story are from the 2021 MSHSL gymnastics state meet.) 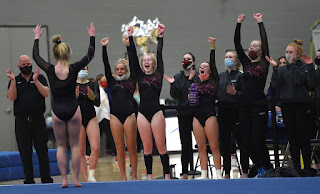 Hopkins coach Meghan Johnson, who traveled to St. Louis to watch the Olympic trials, said the performances of Lee and McCallum “will only make Minnesota gymnastics even stronger, but more likely at the club and lower youth levels. There seems to be an Olympic lift that a lot of clubs see in the months and years following an Olympic year, so that always helps high school gymnastics in the years to come.”

Simley High School gymnastics coach Deana Walsh said, “Every aspect of gymnastics is affected” by the Olympic results. “Minnesota is a hot spot for gymnastics whether it be at the club, high school, collegiate, or Olympic level. We all work together to see the potential in our gymnasts. We are a small, intertwined gymnastics community.”

The Lee family’s commitment to her gymnastics career – her father built a beam in the backyard when Suni was young, for example – along with the large Hmong community in Minnesota showing strong support, is an important part of the story. The Hmong, a distinct ethnic group with ancient roots in China, began coming to Minnesota in the 1970s as refugees from war that ravaged their homelands in Laos. The Twin Cities is home to one of the largest concentration of Hmong in America.

Among that community is Koua Yang, activities director at St. Paul Como Park High School. He was 4½ years old when he came here with his family 40 years ago.

Yang was vacationing in the Black Hills of South Dakota during the Olympic gymnastics competition but found a way to watch Lee and rest of the athletes.

“I had to find a good signal to see it happen. That’s how important it was to me,” he said. “I see her story as one that many people can tie into. I’m the only Hmong AD in the state. She’s the only Hmong person at that elite level. It’s incredible. We’re all so proud of her. It’s amazing.” 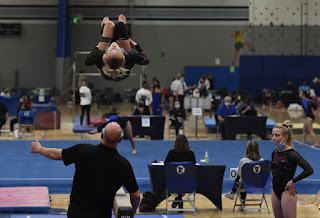 Lee is the first Asian-American to win the all-around gymnastics gold medal and the first Hmong Olympian in U.S. history.

Although the situation is evolving, Hmong families have traditionally stressed education and working in the home over school activities for their daughters.

“That has changed as the Hmong people assimilate here,” said Yang. “With the next generations, families such as mine, that’s not quite as big a factor. But there are still some traditional families. (Girls are) not quite encouraged to come out, as the boys are. A lot of it has to do with domestic duties. That speaks a lot for our Hmong females; they’re great students, they join sports, then they go home and often cook and clean, and take care of younger siblings. It’s a huge testament to their work ethic and perseverance.”

Lee and McCallum are the latest in a line of high-level Minnesota gymnasts. Maggie Nichols of Little Canada was an NCAA champion at Oklahoma in 2017, 2018 and 2019.

“Suni is the new face of USA gymnastics and will undoubtedly help promote the sport because of her personality,” said Lacy. “She is humble, polite, family focused, and an incredible role model for all athletes. She's young enough to consider the 2024 Olympics in Paris, yet she's already stated she's excited to compete for Auburn. College gymnastics has been taken to the next level in large part, because of another Minnesotan, Maggie Nichols. The next three years are going to be exciting!”

Lee’s family lives in St. Paul and this spring she graduated from South St. Paul High School. She’s now a student and gymnast at Auburn University in Alabama.

“Suni is an unbelievable story,” Walsh said. “Her story, coupled with her father's setbacks being a paraplegic, just shows how a great attitude about life can positively influence someone's goals. Suni is from South St. Paul which is the town north of us in Inver Grove Heights, so I feel like there will be an abundance of support for her and the sport of gymnastics. I personally am so proud of her Hmong heritage and how she represents herself, other Hmongs, gymnasts in general. We all can learn from her humbleness.” 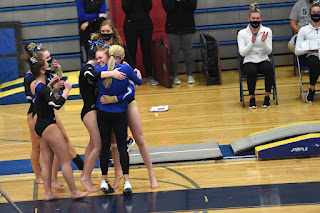