Chisago Lakes Football Looks Back On One-Game Season … And Ahead

LINDSTROM -- As the Chisago Lakes football team prepares for a new season, one small moment at Monday’s practice – a very brief, blink-and-you’ll-miss-it scene – encapsulated everything that Minnesota high school athletes and teams have gone through since Covid-19 began its long, slow bat flip and home run trot around the planet.

The Wildcats wrapped up the day’s drills with 40-yard sprints. Starting at one goal line on their grass practice field, they ran out to the 40-yard line, then back, then out and back again in three groups. Head coach Bill Weiss offered a reminder as one of the groups prepared to run: “Behind the line, not on it! Little things matter, guys!” 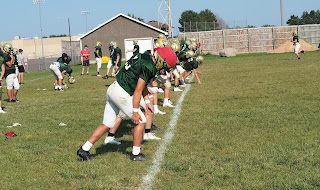 They absolutely do. Little things like the simple act of playing a football game. The Wildcats experienced that just once last fall. That’s correct: The Chisago Lakes football team played all of one game, with Covid driving a stake through the rest of their 2020 schedule. (Rush City is the only other team that played just one game in 2020, while Wabasha-Kellogg played no games a year ago.)

The Wildcats are getting a head start on the 2021 season, with the opener – in the form of a Zero Week game – coming up Friday night when the Delano Tigers make the 65-mile drive to Lindstrom to play on the Cats’ turf field. That is one of five Zero Week games this year, providing opportunities to teams that otherwise would not be able to schedule the usual eight regular-season games. (Friday’s other games are Coon Rapids at Brainerd, Sartell at St. Cloud Tech, Hutchinson at St. Cloud Apollo, and Rocori at Becker.)

After winning the Section 7 championship in 2019 and advancing to the state playoffs for the first time in 18 years, the Wildcats were hoping for another stellar season a year ago. Those dreams were dashed by Covid, of course, and as with most teams in all autumn sports, everything seemed to change by the hour.

“Last fall, I think for a lot of coaches it was probably the most difficult time ever,” said Weiss, who is beginning his 25th year as the Wildcats head coach. “You were on, you were off. For us it that was yo-yo. You didn’t know if your scheduled opponent was going to be who you were playing.

“As humans we adapt to situations, but football coaches can be so dialed in on that specific opponent. I think it changed a lot of the ways we now prepare and how we practice.” 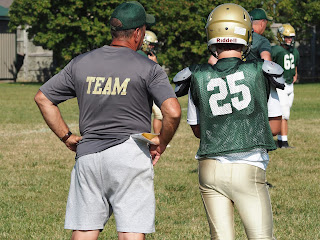 Their lone game was a 35-34 home loss on Halloween to Cambridge-Isanti, with the Wildcats coming up short on a two-point conversion as the game ended. Cambridge-Isanti played seven games in 2020, finishing 3-4.

Looking back on that all-but-lost season, the current Wildcats feel terrible for the 2020 seniors while knowing how fortunate they are to be back.

“I'm grateful to be out here on the practice field,” said 2021 senior captain Conner Wheeler. “But last year it was sad seeing all my buddies and my friends not being able to play. It was very disappointing.”

Fellow captain Braedon Carr said, “Last season was crazy and I wish I could have played more games with those guys. I was close with a lot of them. They were really good players and now some of the younger guys coming up don't have as much experience as some of the people that were here last year. I'm hoping that we can all catch up and get ready.”

Counting your blessings is always valuable, and Weiss said there is a new sense of taking nothing for granted.

“You become much more appreciative of what you did have,” he said. “It sounds silly, because we only had one game, a one-point game against Cambridge-Isanti, and we went for two at the end and didn’t make it. It was only one day but we played football. There’s a greater appreciation.”

There certainly was much to appreciate Monday as the Wildcats began to focus on Delano (which finished 1-3 last year). They spent time focused on kickoff coverage and kickoff returns, for instance, with one side wearing red cloth helmet covers to make sure everyone knew who was who. 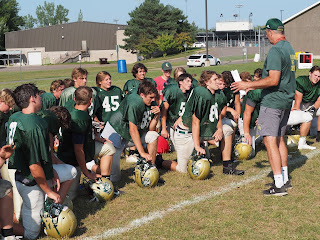 Across a road from the practice field came the sounds of heavy equipment doing prep work for what will become 32 townhomes on the edge of the Chisago Lakes Golf Course. The squeaks from land-moving gear contrasted with squeaks from an adult osprey watching the scene from atop a light tower at Pat Collins Field, the baseball venue next to the football practice field; the osprey also kept an eye on a large nest on the neighboring tower. It’s not rare to find sticks and even fish on the ground under the nest.

Even with 25 years as a head coach under his belt, Weiss can be considered a young pup when Delano comes to town. That’s because Merrill Pavlovich is kicking off his 46th season as head coach of the Tigers. Holding the job since 1976, his 313-151 record stands fifth all-time behind Verndale’s Mike Mahlen (408 wins), Brainerd’s Ron Stolski (389), Becker’s Dwight Lundeen (371) and Eden Prairie’s Mike Grant (358). Stolski is the only retired coach in that group, and the next 19 coaches behind Pavlovich on the all-time win list are also retired. Among active coaches, Marshall’s Terry Bahlmann is next behind Pavlovich with 256 wins.

If all goes well, Chisago Lakes, Delano and every other team in every sport in Minnesota will play their full regular-season schedules and venture into the postseason.

Captain Nick Wasko said memories of getting to state two years ago provide a spark as the new season begins.

“We (three captains) started in our sophomore year and we went to state, so we had really big expectations for last year,” Nick said. “So for us to be back on this field, it's the last season that we have. We want to get back to that point. But all these (younger) guys, they don't know what that feeling is like, they don't know what it's like to be on that team that goes all the way through that section championship and win those playoff games. Our job as captains is to get them in that mindset.”

That’s part of the plan. And in the grand scheme of things, the simple act of being with your teammates, running sprints and keeping your toes behind the line is as good as it gets.

“We told the kids that any day we can get together and play football,” Weiss said, “is a good day.”