Between games on Thursday night, while music was playing and fun was raging, Chanhassen volleyball coach Teryn Glenn turned around in her seat on the Storm bench. Her husband and kids, ages 2 and 5, were sitting a couple rows back. The coach smiled and waved.

It was a special moment – one of many, all over the state – as the 2021-22 high school sports and activities year began rolling in Minnesota. Thursday was the first day of competitions in volleyball, soccer, cross-country and girls swimming and diving. Girls tennis matches began a week earlier and the first football games were played a day later.

--In Perham on Saturday, more than 650 runners competed in the Brave Like Gabe Invitational cross-country event. 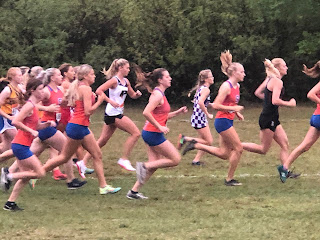 --Before introducing the lineups for the volleyball match between Shakopee and Chanhassen, longtime Chanhassen PA pro Denny Laufenberger said, "Folks, it is great to be back in the gym!" The crowd erupted in cheers.

--Just prior to kickoff on Friday night, with Delano and Chisago Lakes opening the football season in Lindstrom, Chisago Lakes coach Bill Weiss gave the Wildcats one final inspirational message as they stood shoulder to shoulder in five tight rows behind an end zone, swaying back and forth in unison.

“We’ve busted our tails for weeks, for months, for these moments!,” Weiss told them. “Cherish them! Take advantage of them! Let’s get after it with everything we’ve got! Let’s do this! Right here! Right now!”

The players sprinted onto the field as the crowd cheered. Yes, the magical sound of large crowds has returned … even though that may feel a little strange after the spectator limits that were in place during the 2020-21 season.

“It took some getting used to, having people here and the nerves and the atmosphere,” Shakopee volleyball coach Matt Busch said after his Sabers defeated Chanhassen 3-0. “It was an awesome atmosphere.”

Glenn said that as the national anthem was played prior to the match, “I was thinking, ‘We're back, we're here, we're doing this.’ And I got a little emotional, especially after where we've been. I love being here with them.” 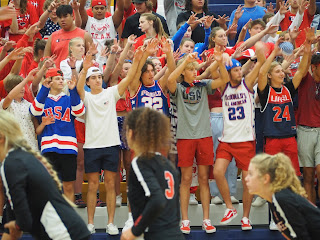 At Chisago Lakes, the football atmosphere was as perfect as can be. The Chisago Lakes marching band, wearing dazzling new uniforms, came onto the field in two rows as the percussion section marked their steps. The cheerleaders and Wildcat mascot – with one proud student inside the costume – and a large, enthusiastic student section were in game shape from the get-go. The dance team and a band of little girls performed at halftime. Everyone smiled.

The football game itself was a work of art. The home team opened the scoring on the first of four TD runs by Ashton Pearson and the Delano Tigers tied it up when a pass by Wildcats quarterback Nick Wasko was intercepted by ninth-grader Jack Scanlon and returned 39 yards for a TD. As Wasko returned to the sideline, he saw a scribe scribbling in a notebook and said in jest, “Don’t write that down.”

The Wildcats played just one game last season, losing to Cambridge-Isanti when a two-point conversion attempt was stopped short. They were in a similar position this time, scoring to trail 27-26 with 3:40 left in the game. They went for two, ran the same play they did against C-I, and the Tigers stopped them short.

Chisago Lakes still had a chance, needing a defensive stop to get the ball back. That looked for all the world as if it would happen when Delano lined up in punt formation from its own 40-yard line with 2:46 to go. Trickeration ensured, and a pass gained first-down yardage. A running play, a quarterback keeper and a kneel-down ended the game and put the cap on an amazing evening.

The absolute, unadulterated normalcy continued Saturday morning as football teams all over the state – all but the 10 who played Zero Week games on Friday – gathered in groups to hold scrimmages. In Lake City, the Tigers hosted teams from Lewiston-Altura, Randolph, Red Wing, Wabasha-Kellogg and Zumbrota-Mazeppa on the vast expanse of lush practice grass around their stadium.

Parents and grandparents sat on lawn chairs, coaches called plays and shouted encouragement. Trains rolled by, some carrying freight and some carrying humans on an Amtrak adventure. One coach, slightly disheartened at a youngster who was learning to read what was happening, said, “Read this right or I’m sending you to the library.”

Afterward, finishing a morning of working out the kinks under game situations, a coach said to his players, “We made it. Nobody got hurt, we got it on film. Did you have fun?” The kids responded with a sweaty, tired, happy chorus of affirmatives.