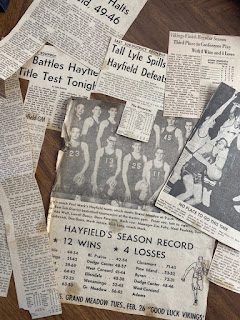 In 1963 a stellar multisport athlete completed his high school career in Hayfield, Minnesota. Fifty-eight years later his grandson is in the midst of a similar career, with a piece of his grandfather’s legacy hanging on his bedroom wall.

Noel Paulson, who was 74 when he died two years ago this month, was Hayfield High School’s first 1,000-point basketball scorer and was inducted into the Hayfield Hall of Fame in 2016. Noel’s single-game high was 40 points, and his grandson Haydn Stay, a 6-foot-4 junior at Princeton High School, broke the family record by scoring 47 in a 105-94 win over Zimmerman on Feb. 20. With a full season remaining in his career, Haydn seems certain to eclipse his grandpa’s career scoring total.

After Noel’s death, a celebration of his life was held in Princeton. Ron Evjen, who grew up in Hayfield, graduated six years after Noel and went on to a lengthy career as a teacher, coach, principal and superintendent in Hayfield (where he still lives after retiring 10 years ago), attended the celebration. He was introduced to Haydn and told the youngster first-hand stories about his grandpa’s high school career.

“I was too young to be playing with him but I was a big admirer of Noel Paulson,” Evjen said Thursday. “He was a big lefthander, a three-sport athlete who was phenomenal in all three.”

Evjen has taken on the role of a Hayfield sports historian. A few years back he scoured old scorebooks and discovered that Noel Paulson had finished his high school career with 1,043 points. Evjen had a plaque made for Noel to commemorate the accomplishment; when Noel passed away the plaque was given to Haydn.

As a freshman in 2019, Haydn played on Princeton’s state tournament team. This caught the ear of Evjen, who played on Hayfield teams that went to state in 1967 and 1968; he has attended every state basketball tournament for nearly 40 years.

“I found out that this kid was Noel’s grandson,” Evjen said. “I told him about his grandpa. I wanted to tell him how good he was. Not everybody there could attest to that. (Haydn’s) Aunt Bev, who graduated with me, called me about a month ago and told me that Noel’s grandson was having a great year and had scored 1,000 points.”

Having admired Noel and met Haydn, Evjen got to work on a project. He had kept newspaper clippings from those long-ago days, and he sent a packet of memorabilia detailing Noel’s career to his grandson. 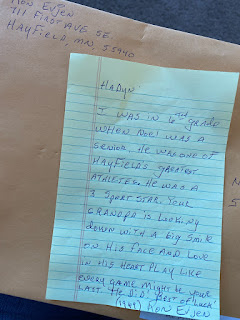 He included this note: “Haydn, I was in 6th grade when Noel was a senior. He was one of Hayfield’s greatest athletes. He was a 3-sport star. Your grandpa is looking down with a big smile on his face and love in his heart. Play like every game might be your last. He did! Best of luck, Ron Evjen.”

Ron told me, “I thought, you know when I die it’s probably going to get tossed away. So there’s no better place to send all of that than to Haydn.”

The Princeton team qualified for the state tournament last season before everything was shut down due to Covid-19. This year they finished with a regular-season record of 16-1 and will host Duluth Denfeld in the opening round of the Class 3A Section 7 tournament on Saturday. Haydn Stay leads the Tiger with a 21.4-point scoring average and 8.6 rebounds per game.

Jody Stay, Noel’s daughter and Haydn’s mother, said shortly before Noel passed away they were looking through some old newspaper articles from his high school career.

“My dad was close to the end, about a month before he passed,” Jody said. “I was reading out loud and he would finish the sentence or the paragraph. It just goes to show that your body can fail you but your mind, your memories can remain. I had heard for years and years and years what kind of athlete my dad was.”

Haydn is also a star football player who plans to pursue that sport in college. This week he received his first scholarship offer from the University of North Dakota.

“I know that he lettered in four sports all four years,” Haydn said of his grandpa’s legacy. “That’s a lot and that’s very good. I remember looking through a bunch of newspapers with him and he was kind of reacting with us about the games that he remembered.” 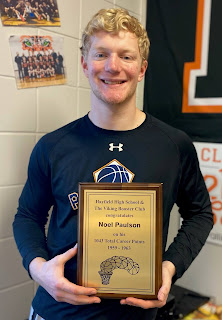 “I was too young to be playing with him but I was a big admirer of Noel Paulson. He was a big lefthander, a three-sport athlete who was phenomenal in all three.”