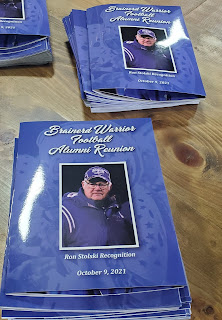 He announced his retirement in January 2020, and a ceremony to honor Stolski was scheduled for that spring. But the Covid-19 pandemic derailed those plans; the event was rescheduled and postponed again. A celebration was finally held this past Saturday in Brainerd, and it was magnificent. Hundreds of people gathered at the Northern Pacific Center, including former players, men who coached alongside Stolski, men who coached against him, friends and family. Later in the day, a reunion of Brainerd football alumni was held in the same location. It was a grand day in Brainerd.

Minnesota Governor Tim Walz, along with the State Senate and State House of Representatives, issued proclamations in honor of Stolski. The mayors of Brainerd and Baxter did the same. The event space was adorned with Brainerd football memorabilia. Upon first blush, Ron wasn't much in favor of being the focus at such a gathering, but he was convinced to do so as a way for others to thank him for all he has done.

Several people spoke, and I was honored to be among that group. Stolski offered remarks that ended the formal program, and his focus was saying thank you to everyone. As always, he didn't want the spotlight on himself.

A graduate of Minneapolis Patrick Henry High School and Macalester College, Stolski was named a head football coach right out of college in Kensington, Minnesota, in 1962. After two years there he spent one season at Slayton, six at Princeton and four at Park Center before moving to Brainerd in 1975.

He is a member of eight Halls of Fame, including the MSHSL and Minnesota Football Coaches Association Halls. His career coaching record is 389-182-5. The only coach with more victories is Verndale’s Mike Mahlen, whose record over 53 years (and counting) is 414-125-3.

I have known Ron for years and consider him a good friend. I attended countless Warriors practices and games and always enjoyed it immensely. One day after practice, Ron asked if I would like to join him for a drink. We drove to a watering hole where everyone knew the coach and wondered who the stranger was.

We sat and had a good conversation, as we always did. At one point, Ron looked at his watch and began apologizing, telling me his wife, Sharron, was holding a birthday party in his honor and he better get going. I am not kidding at all: Stolski spent time with me when he should have been at his own birthday party. That’s the kind of person he is.

The day Stolski retired, we talked on the telephone. My good friend Mike Bialka who had retired after a long and distinguished career as the sports editor of the Brainerd Dispatch (and continues to tabulate statistics at Warriors football games) had broken the news of Ron’s retirement. I called the coach that day and it was an emotional conversation.

The End Of An Era As Ron Stolski Retires From Coaching

Listening to Ron Stolski speak, I have been brought nearly to tears on three occasions. The third time was during a Wednesday afternoon phone call. This was a few hours after word of Stolski's retirement following 58 years as a high school head football coach came via Tweet by former Brainerd Dispatch sports editor Mike Bialka, who himself retired a year ago.

Stolski's record is well-known around Minnesota. Fifty-eight years as a head coach, the last 45 at Brainerd; he ranks second in all-time football victories and coached longer than anyone else in Minnesota.

He informed Brainerd athletic director Charlie Campbell of his plans in December, and Stolski, 80, told me he was "98 percent" sure at that point. Once he had settled on retirement, he called a players meeting Wednesday morning. The only other people there were assistant coaches Chet Stevenson and Scott Parsons, who also chose to retire. Stevenson played for Stolski at Princeton and Parsons did the same at Park Center; Chet was on the Brainerd coaching staff for 44 years, Scott for 42.

As the kids gathered, Stolski asked them to turn off their cell phones because he didn’t want them to spread the news via text and social media; he had promised Bialka that he would have that privilege once the meeting ended.

He told the young Warriors, “I promised that I wouldn’t have tears today. But I never trusted a man who couldn’t cry.”

Through his tears, the coach talked to his now former players about the football program’s history, what it was like when Stolski came to Brainerd in 1975, and how the story flowed from there. 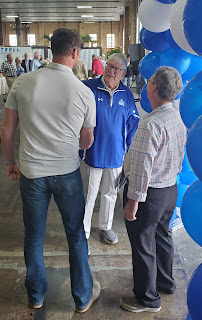 “I said, ‘Your job now is to continue the legacy that is Warrior football. Be good teammates, be good friends, be good sons and someday be good fathers and good husbands.’ I told them I was most proud of the number of people that played for us and are now in the trades; construction, surgeons, preachers, teachers, doctors. I said, ‘That’s your goal.’ ”

I was unable to speak for a few seconds listening to the old coach talk over the phone. I gathered myself and told him that I was on the verge of tears. I think he was, too.

The first time Stolski had that effect on me came long ago, probably 15 or 20 years back. I was in the Warriors locker room before a home game. The room was crowded as the players sat on benches and stood in front of lockers. A white board served as a background as assistant coaches who focused on offense, defense and special teams offered their final instructions before the head coach took over the room.

And man, could he take over the room. Stolski began talking in a calm voice, reminding the boys -- boys who today are adult men -- of who they were and the legacy they represented. His voice rose as he talked about all the hard work, all the preparation, all the pride involved in that night’s endeavor. The volume began to climb as he hollered, “One heartbeat!” … meaning the team must play as one on this beautiful autumn evening.

And now, the boys were standing, hooting and hollering, filing out of the locker room, heading for a decades-old stairway on a hill that overlooks the field, steps on which a million Warriors cleats had gone downhill and back up for every practice and game. Now, Stolski was giving it all he had, yelling, “Relentless! Relentless! Relentless!”

The second time Stolski had this effect on me came in the first game of the 2019 season. The Warriors opened what would be Stolski’s final season at Elk River.

As I got out of my car a couple hours before kickoff, Stolski was walking from the locker room in the school out to the field. We shook hands and chatted, as we have done countless times over the years. It was a cool, breezy night … rare for Week 1 of the football season in Minnesota.

I hadn’t even asked the “retirement” question before Ron said he had no such plans. He said, “I don’t feel like I’m 80,” adding what he had told me several times in prior years; as long as he felt like he was doing good things for kids, he would stay on the job.

After the Brainerd and Elk River teams completed their warmups, the Warriors gathered behind one end zone for their final instructions. Again, assistant coaches talked about offense, defense and special teams. Then it was the head coach’s turn.

He spoke in that strong, familiar voice, the decibels steadily climbing, “We’ve talked about some past teams, the 2017 team, the 2010 team that stopped Eden Prairie on the 3 in the playoffs. Listen! It’s your story now! One day, God willing, somebody will be telling the story of you! A coach will stand up and say, ‘Let me tell you about the Warriors of 2019!’

“Play clean. Play sharp. Rattle the pads. It’s going to be a beautiful journey. I envy you. Tonight, we stand as one.”

As the team returned to the field, I shook Stolski’s hand with misty eyes. I said, “Coach, I love to listen when you talk to your kids.” He smiled and said, “And I never write anything down.”

After the news came out Wednesday, I asked Charlie Campbell, who has been the activities director in Brainerd for nine years, what he will remember most about Stolski 10 years from now. The question seemed to catch him off guard

“Ron is just so wise. His heart was always in the right place. The experience of the kids always mattered. And I think coaches, administrators and school people have learned a lot from Ron. And I think 10 years from now, we could still learn a lot from Ron.”

Stolski has many good friends, of course. One of the closest is a man named Steve Nunnink. He coached with Stolski, specializing in strength training, in the early 1970s at Park Center and came to Brainerd with him. Steve, who was the national high school strength coach of the year in 2001, suffered a massive brain trauma on the sideline during the 2003 season opener.

Stolski visits Steve and his wife, Randi, often. Some days are better than others for Steve as far as being able to communicate. When Stolski was finalizing his decision to retire, he visited the Nunninks.

“I probably talked to Steve for an hour and he probably didn’t hear anything,” Ron said. “He’s been my inspiration forever.”

Two days later, Randi called and said Steve was having a good day. So Stolski went back to the Nunninks and said to his friend, "Stephen, our work here is done. Steve waited a minute and he asked, ‘Why?’ I said we’ve done what we set out to do, Steve. Forty-five years ago we set out to create a good program and do good things for people. He said, ‘No.’ I broke down. He thinks we’re still coaching together. I asked him why he said no and he said, ‘Because the kids need you.’ ”

As we continued our emotional conversation, Ron said this: “When we choose a life in teaching and coaching, we choose to help those we come in contact with. My computer is going crazy with messages from former players. This will be hard for a few days.”