"Be kind, for everyone you meet is fighting a hard battle"

Below is an important story from the recent wrestling season. The team at North St. Paul High School developed an important, meaningful relationship with a fellow student who suffers from Batten disease, a group of rare inherited neurological conditions. That student's mother wrote the following ...

One of the hardest phrases I am learning is "thank God for Battens." I'm not sure I have accomplished the actual gratitude behind that statement. But I HAVE recognized the amazing opportunities, gifts, blessings given to us because of having Battens in our lives. I have been humbled by the goodness of people. I have learned to love and be thankful for them in ways I never would have known in the absence of Battens. People are good. They have reminded me of the ways grace has filled our lives.

I have wanted to write something for months now. Since the middle of the school year last year, before Covid hit, Drew has had a teacher who has taken him under his wing. A teacher that invited him in even when Drew wasn't technically a part of his class. Who let Drew hug him 14 times in a row, and show him a toy every single day. Who stayed after school so Drew could do an activity. When the quarantine began, and Drew couldn't understand why he didn't get to go to school anymore and his routine completely upended (all you special needs parents know the craziness of changing routines!), Mr. Denver Moeller gave Drew his number with the permission to call or FaceTime him anytime. So Drew still got to show him his toys, and got to know his kids, and shared about movies...... Moeller has given him the gift of his attention and time and patience time and time again, even though his life changed with Covid also. He even got Drew to exercise a couple of times! Lol

Mr. Moeller is also the high school head wrestling coach. This year, he invited Drew to be the manager of the team. As the mom, as someone who has my own childhood insecurities about being included, it made me nervous to not know how Drew would be received. I KNOW that Denver would take care of him, but Drew is hard to understand, his mobility has declined, his sensory issues can be overwhelming. 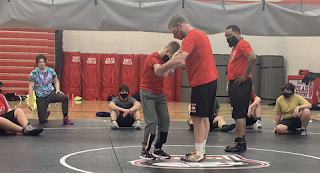 I didn't need to worry. The young men on that team were gracious. Kind. Willing to learn about interacting with a blind person. Denver even taught them what to do if they end up wrestling against a blind wrestler. It was a humbling experience to watch Drew interact with the coaches and wrestlers. It was a beautiful one. I NEVER made it through an entire practice without getting choked up.

This past week, Drew lettered in High School Wrestling. When we thanked Moeller for making that happen, he was quick to point out that it was a team decision. The boys and coaches decided it. One of those things as parents we had accepted would never happen. Had decided it didn't "really matter." It was an amazing feeling to see him receive it.

Below is a letter I wrote to the team in February. I still don't feel like I have the words or that there is a big enough word for the amount of thankfulness I feel for this team and coaches. For Mr. Moeller. The world needs more people like him. 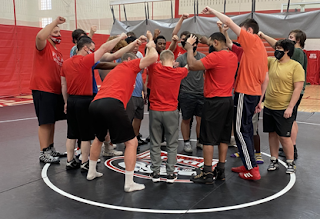 To the North High Wrestlers & Coaches:

"Be kind, for everyone you meet is fighting a hard battle."

Thank you for your kindness towards Drew. For welcoming him, for saying hello, for allowing us in your space. Thank you for the high fives, or fist bumps, and for showing him how to roll up the mat. Thanks for the things that are “no big deal,” even if coach just told you to do it.

You saw a blind kid who was trying something new and who has never been part of a team. What you don’t see is the battle Drew is fighting. Drew has a rare neurological disease called batten disease. It has taken his sight, and will take his speech, his mobility. Eventually, it will take his life. His sister, Lydia, died last August from this disease. He doesn’t understand the finality of the disease. But he does understand love. Acceptance. Kindness. Being a special needs kid can be very isolating from kids his age. As his mom, that is one of the hard things to observe. My heart is full to watch your actions with and towards him. Making someone feel included is very powerful. You may think it is no big deal, but even those little actions can make a big difference.

I am thankful for you.

Never stop because what you do has an impact, no matter how big or how small.

You have given Drew some awesome memories and experiences, and provided some for myself that I am so thankful I will have in the future.

From your lifelong fan, 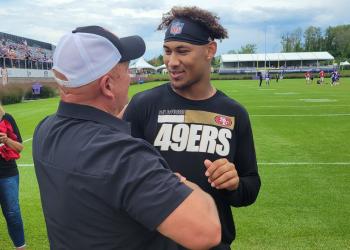 John’s Journal: A Day To Remember For The Marshall Tigers

August 18, 2022 |
John's Journal
“There’s nothing to compare it to. For an NFL team to reach out and do something like this for us, it’s really special. It’s something our kids will remember forever.” 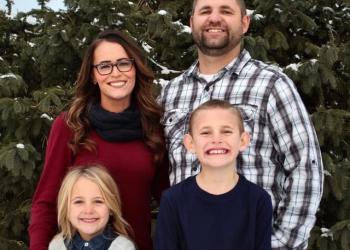