John’s Journal: It’s A Good Time To Be A Spud

It’s Not All About Winning At Moorhead

There are several important themes in place for the Moorhead High School football team this week. One is a guy everybody calls Boomer. Another is playing fast, smart football in a season that has begun with two dominating victories. And then there’s the family college football ties that, once you dig in a little, aren’t all that problematic.

Boomer is Justin Behm, an assistant coach with the Spuds. He was a football teammate of Spuds head coach Kevin Feeney at North Dakota State; they have been friends ever since and coaching colleagues with the Spuds for a decade.

Right now, Boomer is in a California hospital and the thoughts of the coaches and players are with him. After Justin noticed some hearing loss, a benign but large brain tumor was found. During surgery -- and before the tumor could be removed -- a facial nerve was damaged, resulting in facial paralysis and total hearing loss on his right side.

Boomer underwent surgery last Friday. Before the Spuds kicked off at home against Alexandria, Boomer’s wife Katina posted this on CaringBridge: “I just got a call from Dr. Friedman. They were able to remove 100% of the tumor! Dr. Greene is now working on repairing Justin's facial nerve which includes 2 strategies. She also plans to add the weight to his eye so he'll be able to close it while he waits for it to restore functioning. So far so good everyone! Keep the well wishes/prayers/vibes/ positive thoughts coming!”

“We challenged the kids last Friday night,” Feeney said Thursday. “We told them Boomer is such a passionate guy and told them to play passionate football for him.” The Spuds did that in a 42-0 win to go to 2-0 before this Friday’s game against Sartell at St. Cloud Tech. 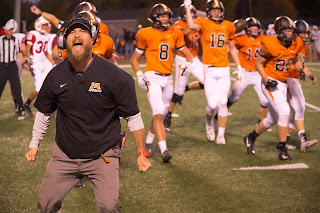 “The first thing I think of is his passion,” Feeney said. “It doesn’t matter what we’re talking about, he’s passionate about everything in his life, whether it’s his favorite pro team or the people around him, student, players. His excitement rubs off on our kids.” (That’s Behm in this photo by Drew Sandberg from a 2017 game).

Boomer, who watched Friday’s game online from the hospital and offered comments in a Saturday phone chat with Feeney, should be home next week.

“He won’t be back in a coaching capacity but he told me he’ll be back on the field as soon as he can to see the kids and coaches,” said Feeney.

Moorhead runs a five-receiver, spread offense triggered by Feeney’s son Trey, a 6-foot-2, 195-pound lefthanded senior with great feet, vision and the ability to whistle footballs to his talented targets. In last week’s game with Alexandria, Trey passed on the Spuds’ first 12 plays and 19 of their first 24. Through the season’s first two games they have outscored their opponents 98-6 and Feeney has completed 39 of 58 passes for 634 yards and 10 touchdowns.

And to think, at one point there was going to be no football this fall. Trey remembers the day that decision was reversed by the MSHSL board of directors. He was sitting in American Government class, refreshing Twitter over and over.

“I’m sure all 100 of us football kids in school were doing that,” he said. “I had some other football guys in my class, and we all stood up and shouted a little bit. We were pumped.” 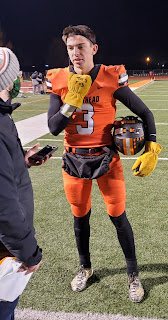 For outsiders who know Kevin Feeney’s North Dakota State football background – he was a record-setting QB for the Bison before graduating in 1998 -- it may have been surprising when Trey committed to North Dakota. But the Feeney family carries dual allegiances. Kevin’s older brother Steve played at UND and Kevin told Trey the decision was all his.

“From the beginning of the process I made it clear to him that this was his choice about where he wanted to spend four or five years,” Kevin said.

Trey attended a football camp at the University of Wisconsin before his junior year. While there, UND coaches invited him to their camp. Trey built a strong relationship with the North Dakota coaches from the start, he said, especially offensive coordinator Danny Freund and head coach Bubba Schweigert.

“Danny has really delved into what we do offensively and showed Trey how it fits with what they do,” Kevin said. Trey has even joined the UND offensive coaching staff on Zoom calls.

“Their offense is a lot of the same stuff we run, just different terminology,” Trey said. “I’ll adjust to that.”

Boomer will be home soon, the team is rolling, and next year the Feeneys will have another football player at UND.

It’s a good time to be a Spud.

--MSHSL media specialist John Millea has been the leading voice of Minnesota high school activities for decades. Follow him on Twitter @MSHSLjohn, listen to "Preps Today with John Millea” wherever you get podcasts. Contact him at jmillea@mshsl.org

“I’m sure all 100 of us football kids in school were doing that. I had some other football guys in my class, and we all stood up and shouted a little bit. We were pumped.”
Trey Feeney

John’s Journal: The Lessons Of Covid-19