John’s Journal: The Lessons Of Covid-19

Everything Is Different, Everyone Learns To Adjust

As another week of high school activities ends under the nasty, dark eye of the corona virus, two things have become clear, two things that are paramount as we continue to navigate this roller-roaster ride in the dark.

Number 1: Be flexible. Number 2: Take care of each other.

Week 3 of the football season was a case in point. Covid-19 struck lots of teams as Friday and Saturday games neared, schedules were rewritten on the fly and it was just plain weird.

Edina and Bemidji, who had never met on the football field, put things together quickly. Edina activities director Troy Stein posted this Twitter message on Tuesday evening: “Late change in game plans - no problem we will roll with it. We are looking for a Friday home varsity football game. Reach out to @Troy_Stein if anyone knows of other teams looking to play. #Thanks”

On Wednesday, the Lumberjacks learned that their game at Apollo was off. Football coach Bryan Stoffel was in activities director Troy Hendricks’ office and “we were trying to figure out our next move. I had seen on Twitter that Edina was looking for a game and so we reached out to them in the early afternoon of Wednesday, and by three o'clock on Wednesday we had finalized the game.”

Stoffel is a first-year head coach, as is Edina’s Jason Potts. This season is wild enough even for experienced coaches, but imagine being new in the job and trying to get routines in place when everything can be flipped upside down in a heartbeat.

“The night I got film (of Bemidji) I spent seven hours working on the game plan, woke up, we did a walkthrough and it was game time,” said Potts after Bemidji’s 35-0 victory. “So yes, it's tough. It’s very challenging but it’s the times we live in.”

It’s a drive of 220 miles from Bemidji High School to Kuhlman Stadium. The Lumberjacks left home on three charter buses at 10:30 a.m. Friday, stopping in St. Cloud to stretch their legs. They had been sent off with lunches to eat on the way. Edina High School had paid to rent the Braemar Dome from 2:30 to 5:30, giving the Lumberjacks a place to stretch, relax, get dressed for the game and warm up. After the game, Edina football parents loaded the buses with pizzas for the Lumberjacks’ trip home. 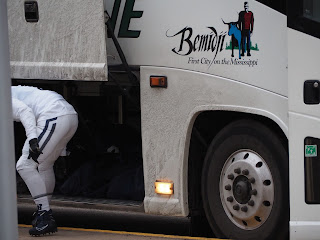 Bemidji, which plays Class 5A football, is not a small town. But it’s not Edina (6A), either. As the teams began warming up at Kuhlman, a few Lumberjacks players on the sideline looked beyond the north end zone at a complex that includes South View Middle School, Normandale Elementary and Art Downey Aquatics Center. “This is their MIDDLE school,” one of them said. Actually, it was ONE of their middle schools.

The game was close early but the tide shifted toward the Lumberjacks. A 51-yard pass from Brett Tharaldson to Gavin Luksik set up a 1-yard scoring run by Will Falldorf for a 7-0 Bemidji lead at halftime. An interception by Brandon Lussier on the second play of the third quarter was followed by a 42-yard scoring pass from Tharaldson to Luksik, and Tharaldson hit James Williams III for a 28-yard touchdown to make it 21-0 after three quarters.

Another interception by Lussier was followed by Gemini Ellis running for a 1-yard touchdown, and Walldorf completed the scoring with a 3-yard run with five minutes to play.

More evidence of how odd this Covid-cursed season has become: After the St. Michael-Albertville team was taken off the go list for this week’s game at Edina, the Knights ended up being cleared and played a quickly-arranged game with Champlin Park on Friday. The Rebels had been scheduled to face Anoka before the Tornadoes were sidelined by the virus.

Further dominoes continued to fall Friday when the Anoka-Hennepin school district – which includes Andover, Anoka, Blaine, Champlin Park and Coon Rapids high schools – announced that due to rising Covid numbers it will halt all sports programs beginning Nov. 2, with no word on how long that will last.

Hendricks, who was the Bemidji football coach for 18 years before stepping down after last season, summed up what’s happening when he said, “It’s wild. It really is. Every day you walk into the office, it’s something new and different and you’re just scrambling to stay ahead, I guess.”

Be flexible. Take care of each other.

“We're thankful to have a game,” Edina’s Potts said. “This season there are no guarantees.” 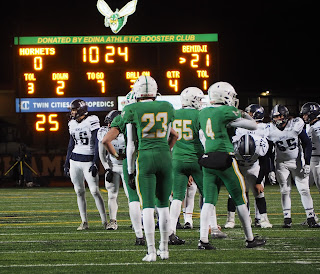 “The night I got film (of Bemidji) I spent seven hours working on the game plan, woke up, we did a walkthrough and it was game timey. So yes, it's tough. It’s very challenging but it’s the times we live in.”
Edina football coach Jason Potts