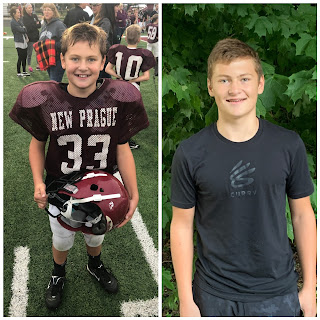 The following was written by Eric Brever of New Prague.

Wanted to make you aware of a pretty cool experience as part of New Prague’s homecoming football game this past Friday against Northfield.

About two weeks ago, Mason Decker, an eighth-grade student at New Prague Middle School and the child of two beloved faculty members in the New Prague school district, was diagnosed with a form of non-Hodgkins lymphoma. Mason was involved in track, basketball and football for the Trojan middle school programs.

Since Mason is a member of the football family, the New Prague football program early last week decided to coordinate a fundraiser to benefit the Deckers. Partnering with a number of ISD 721 staff members who volunteered their time, and working with the basketball, track and hockey programs at the high school, the football program put out word about the intention to benefit at Friday’s homecoming game by selling surplus athletic t-shirts from football, basketball and hockey programs, with all proceeds—along with free-will donations—to go to Mason and his family. 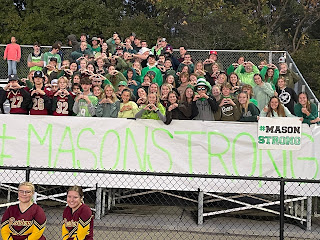 New Prague High School students were motivated, making small donations in their own right and dedicating their spirit garb for the evening to be green instead of school colors cardinal and black, as lime green is the color of support for lymphoma cancers. As the Trojan football took the field on Friday, it was amazing to see the student half of the New Prague bleachers be entirely green.

But what was particularly impressive was the Northfield bleachers, as their student section also came dressed in green, and rolled out a giant sign across their bleachers: “No one fights alone- #MasonStrong.” The Raiders coaching staff walked over to Trojan head coach Jake Norby and handed a donation and a card for the Mason benefit. They stood right with us in the initiative.

It shows that two neighboring communities who have played countless rivalry games against one another come together when it counts. It transcended the game. It brought tears to the eyes of the staff who worked hard to organize the event on short notice.

That night alone we raised more than $8,500 for Mason’s benefit.

The Trojans had more points on the scoreboard that night, but the real winners were Mason and the Decker family and the two communities that came together to support the cause. 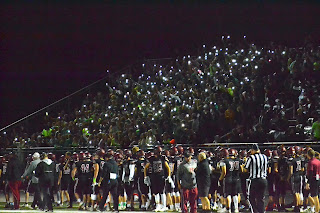