College Student Hayley Dessner Gets In The Game

After officiating a basketball game earlier this week, M.J. Wagenson pulled out her phone and snapped a photo of herself and her partner in stripes. Wagenson, who lives in Pine Island and is one of the most respected veteran officials in Minnesota, was documenting history; the other official had just worked her very first game.

The photo was Tweeted by the Rochester Area Officials Association (@RAOMN) with this message: “Shout out to young Hayley Dessner. She worked her first basketball game last night with M.J. Wagenson. Way to go Hayley!”

Dessner is 20 years old, a graduate of Plainview-Elgin-Millville High School and a sophomore at Rochester Community and Technical College, where Wagenson is a faculty member. Hayley was a volleyball, basketball and softball player in high school, with Wagenson officiating some of her games. They got to know each other when Hayley began taking classes at RCTC, where Wagenson is a member of the sport management faculty.

Hayley is majoring in elementary education and would like to work as a coach and official.

“She needed another course and I suggested the officiating course,” Wagenson said. “If nothing else, it will make you a better coach. We were working several weeks on rules, casebook, we’ve been on the court a few times, walked through mechanics. She’s a very dedicated student.”

Hayley said, “I took the officiating class my freshman year with M.J. I looked into officials and what they do and this year I’m officiating basketball.” 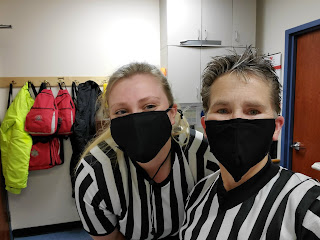 Hayley’s officiating debut was a 4:30 p.m. eighth-grade game between Lanesboro and Schaeffer Academy in Rochester. A couple hours before tipoff, she and Wagenson – who made her MSHSL officiating debut in 1986 -- walked through some things to remember on a court at RCTC.

Before tipoff, Wagenson asked Dessner, “Are you a little nervous? She said, ‘yeah.’ I said, ‘Don’t worry, it’ll be just fine. Let’s do what we’ve been practicing and you’ll be fine.’ ”

When it was over, Hayley told M.J. and Perry that she had a long list of things in her head to work on. Perry’s advice was to “pick one thing, and when you have a handle on that try to move to the next thing.”

Hayley said. “I could tell I made a few mistakes, but everyone said I did really well for my first game. M.J. helped me prepare really well. I can’t thank her enough.”

“As an athlete you see the refs and you can tell if it’s going to be a good game,” she said. “I wanted to become the kind of ref who will walk into the gym and people will know it will be a good game.”

As with all new MSHSL officials, Dessner was assigned a mentor, a role Wagenson is happy to fill.

“I told her you might run across somebody else you really connect with,” said M.J., who in 2016 became the first female official to work at the boys state basketball tournament. “She’s a super nice kid.”

Hayley’s first game was a success and more will follow. She has already noticed one important factor of working as an official: friendship.

“It’s just connecting with other officials,” she said. “I really enjoy seeing their perspective and hearing their stories.”

One more thing: She’s considering officiating volleyball and softball, too.

--For information on becoming an MSHSL official, click here: https://www.mshsl.org/officials-judges/officiating

“I could tell I made a few mistakes, but everyone said I did really well for my first game. M.J. helped me prepare really well. I can’t thank her enough.”
Hayley Dessner